Two Free Years of College for All: Two Bad Ideas

This week, President Obama presented an ill-conceived idea: (a) that every high school graduate should attend college and (b) that the federal and state governments should pay students’ costs to attend a community college for the first two years. It’s a bad idea for several reasons. First, every high school graduate does not have the knowledge and skills needed to succeed in college. In fact, a college education is not a necessary prerequisite for success or wealth. Consider this l 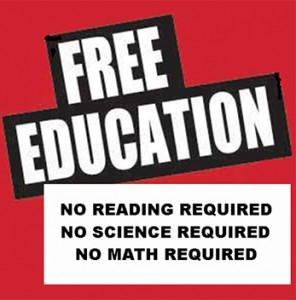 Among high school graduates in California in 2011 who completed the ACT, the college admissions test administered to almost 2 million high school graduates each year, 43% scored below the ACT benchmark in reading, and 43% scored below the ACT benchmark in mathematics (ACT, 2013, p. 3). The failure to record at least a benchmark score means there is only about a 25% chance of a student receiving a “C” or higher in an introductory social science course or a college algebra course as a first-year college student. The scores of 13% of high school graduates in California fulfilled one benchmark; and 23% of students failed to record even one benchmark. 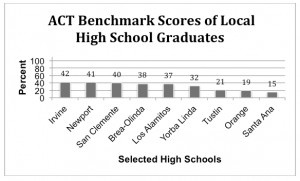 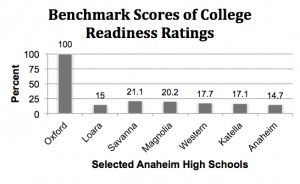 It does not make sense to assume that all high school graduates can successfully complete two years of college. Many will not succeed—unless they receive passing grades they do not earn, thereby dumbing down the meaning of a college education and wasting billions more of taxpayers’ dollars. Billions have been wasted on No Child Left Behind and Reading First. Reforming public education so that high school graduates will be prepared to succeed in college requires more than spending money: A revolution is needed in theory and practice. Arnold Dodge at Long Island University suggested a new direction this week in a column in The Huffington Post.