Parents of children attending Palm Lane Elementary School, supported by encouraging outsiders, are seeking authorization to convert Palm Lane into a charter school. They assert that its students have underperformed on state tests school since 2003. They regard the school’s Academic Performance Index of 746 as “anemic.” And they point out that the majority of fifth graders record substandard scores in English language arts and mathematics on state tests. Before further limiting students’ progress, parents might consider a few facts.

During 2011, 2012, and 2013, students in the Anaheim City School District completed state tests in language arts and mathematics. Students in the same grade in schools completed the same tests. Scores recorded by students at Palm Lane Elementary School during this period were highly similar to the pattern found in several other schools in the district (see the following two figures). 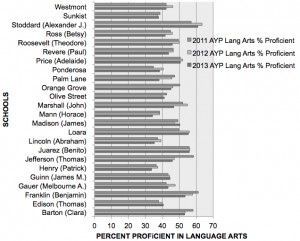 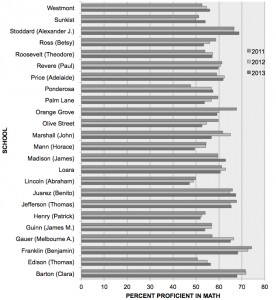 Similar schools in similar neighborhoods with similar children record similar scores on school tests. In Anaheim and in other school districts throughout the nation, it is normal and predictable that students lacking proficiency in English record substandard scores on achievement tests, particularly tests that require English fluency.

The seminal research of John Hattie (2009) has identified school-related factors that significantly increase school achievement. Which factors matter? Hattie’s principal finding: More than any other factor, it is the teacher and teacher-student relationships that matter. Attending a charter school is not one of them.