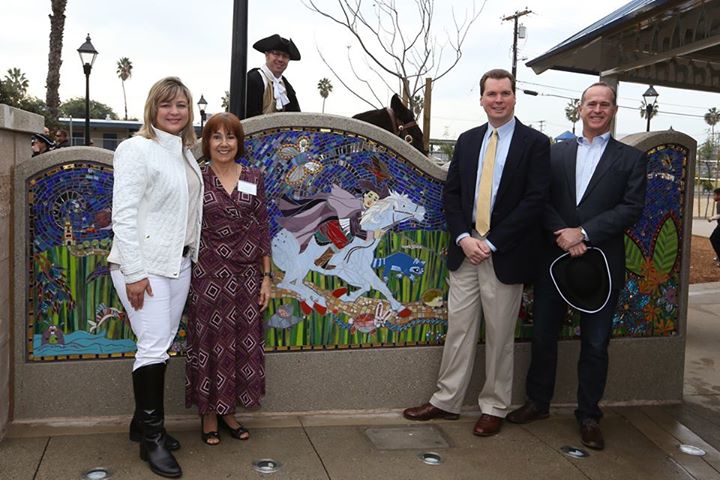 Park amenities include a volleyball court, gazebo, playground area, exercise stations, native landscape and plantings, security lights, picnicking facilities and open turf area.  It isn’t a very big park, but any time a city can reclaim land in older parts of town built prior to modern development sensibilities, it is a good thing. Families and kids need places where they can relax, run around and enjoy the open air. This is the nuts-and-bolts of what city governments do.

From the official city press release:

Yet the focal point for the Park is a mosaic mural depicting Paul Revere’s midnight ride. The design was developed using drawings created by students from Paul Revere Elementary School on which animals children imagined Paul Revere came across during his famous ride.

“We are pleased to open Paul Revere Park,” said Anaheim Mayor Tom Tait.  “Parks provide residents the space to gather, develop healthy habits, and build social connections. I do believe that when people get together, good things can and will happen. Anaheim is committed to investing in all our neighborhoods, and Paul Revere Park demonstrates the good that results when residents and local government work side-by-side.”

The city posted a video story on the dedication ceremony on its YouTube channel, and you can see more photos of the event on the City of Anaheim Facebook page, as well as the FB page of Councilwoman Kris Murray.