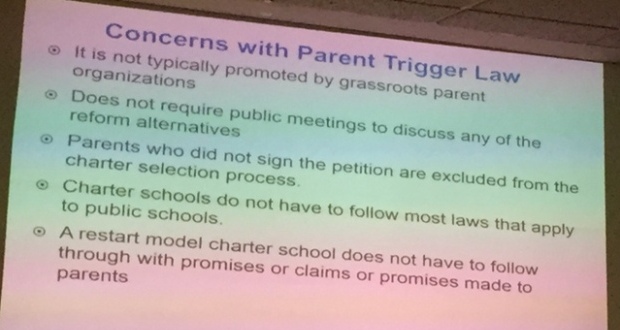 Slide from January 20 “educational” for Palm lane parents organized by the teachers union. The slanted framing shows It’s clearly intended to lead parents to think they’ve been duped into supporting re-starting their school as a charter.

The group of Palm Lane Elementary School parents seeking to re-start their school as an independent public charter school turned in their Parent Trigger Law petition – signed by 70% of the school’s parents – on January 14. At that point, the job of the Anaheim City School District became simply to verify the validity of those signatures (a task the district has 40 calendar days to complete).

Suddenly, the district has flown in to flurry of activity scheduling on-site meetings with small groups of Palm Lane Elementary parents. According to reports I’ve been receiving, district staff — including ACSD Community Liaison Coordinator Yesenia Navarro – have called parents who signed the Parent Trigger Law petition to invite to them to on-site meetings. There will be only a small handful of parents at each meeting, the topics of which reportedly are 1) educating them about charter schools and 2) asking them about their concerns and what changes they want.  The meetings start today, and are held at 1:00 p.m., 3:00 p.m. and 6:00 p.m.

I’ve also received disturbing reports (which I am trying to verify) about warnings given to parents about what they can and cannot do in these meetings.

First of all, why is the Anaheim City School District suddenly motivated to bring these parents – in small groups in which they will feel outnumbered by district officials — to “educate” them about charter schools after they have signed a petition requesting conversion of their school to charter status? Remember, this is the same school district that blasted out a misleading “educational” letter and robocall to Palm Lane parents containing false information and rumors about the Parent Trigger Law petition then being circulated, in a fairly obvious attempt to deter parents from signing.

It’s a good thing the ACSD has decided to inquire with these parents as to their concerns about the education their children are receiving at Palm Lane and what changes they’d like to see. But why now? The timing is suspicious, but also evidence of how even the prospect of competition incentives school districts to be more responsive to the parents of their students. Is this what it takes to get the district’s attention?

However, coming hot on the heels of similar “educational” parent meetings organized the teachers union two days ago, my experience-based instincts tell me this is part of a larger strategy to obstruct and ultimately defeat the desire of these same parents to convert Palm Lane Elementary into a charter school.  Given that goal, it’s a smart strategy: bring in parents – many, if not most, of whom are immigrants with limited or no fluency in English –  in small groups of four or five to meet with a bunch ACSD authorities and start “explaining” what charter schools are “really” about. I think the goal of these district- and union-sponsored meetings is, by hook or crook, flip some parents who signed the petition by inducing or “encouraging” second thoughts so they’ll request the removal of their names from the petition. Legally, the rescission option ends once a petition is submitted, but the anti-charter forces are in PR mode now and seeking to de-legitimize the petition.

I sincerely hope I am wrong, but the actions of the district and the unions on this issue (and years of observing how the public education establishment reacts to school choice efforts in general) lead me to the opposite conclusion.