Ed Ring of the California Policy Center penned an education column about the state’s Open Enrollment and Parent Trigger laws in today’s FlashReport.org, discussing the nuts-and-bolts of both. Here’s an excerpt:

Every year the results of standardized academic achievement tests, administered to every K-12 public school student, are compiled by school and by school district. In the most recent academic year, thecomposite score for these tests for all K-12 students in California was 790. The open enrollment list was supposed to be the 1,000 schools with the lowest scores. For example, on the current list, the lowest score belongs to Oakland International High School with an API of 374. But in the compromises made in order to pass the bill, among other things, the published list of open enrollment schools cannot include more than 10% of the schools in any given school district. This gives the worst school districts in the state a pass, and actually leads to some schools getting onto the list that probably don’t deserve to be there. Nonetheless, at least those parents whose children attend these 1,000 schools have choices, and that is a very good thing.

The parent trigger list is compiled according to a more complicated formula. In summary, the criteria is as follows: Any school that has an API lower than 800, AND has failed to improve its API score in each of the last four years, is a parent trigger eligible school. The process of accurately compiling this list is tedious, requiring the analyst to research multiple CA Dept. of Education reports for multiple years while navigating several exclusions that complicate the selection process. But there aren’t carve-outs that prevent, for example, 90% of the schools in an underperforming district from any accountability, such as is the case with the open enrollment list. Here is a list of Parent Trigger Eligible schools in Orange County, compiled by the organization Excellent Educational Solutions (PDF file):Trigger Eligible Schools in Orange County. The entire list is also posted on the table below – note that Palm Lane Elementary is not on this eligibility list because they have already been “triggered.”

It’s well worth you time to read the entire article here.

Ring also posts a list of Orange County schools that are “trigger eligible” under the Parent Trigger Law. Although only parents at Palm Lane Elementary have so far sought to exercise their rights under that law, it turns out more than half the schools in the Anaheim City School District are trigger-eligible: 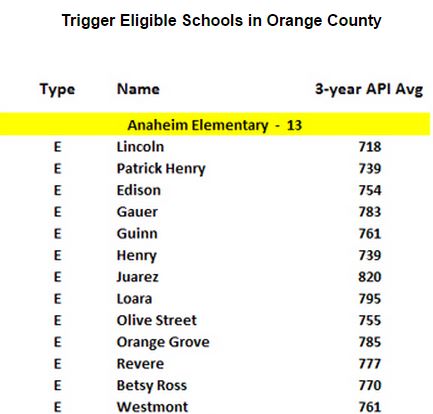 That list gives one an idea why the Anaheim City School District leadership and school unions are so alarmed at the prospect of Palm Lane parents succeeding in their effort to re-start their school as an independent charter school.