For School Unions, Palm Lane Charter Fight Is All About Union Membership

According to sources who attended yesterday’s CSEA-sponsored “parent information meeting” at Palm Lane Park, the free-food-and-drinks event was attended by a couple of dozen union members (primarily CSEA members) and about 20 parents (half of whom were supporters of converting the school into an independent public charter school).

Retired Sen. Gloria Romero of the Center for Parent Empowerment was there and had the opportunity to converse with the featured speaker, OC Labor Federation Executive Director Julio Perez. When Romero asked why the unions were opposing the Palm Lane charter petition, Perez replied it was because teachers and staff “wouldn’t be protected” – i.e., they wouldn’t necessarily be union members.

There’s no requirement for charter school employees to be unionized, but neither is it prohibited. The employees of the 21 California charter schools operated by Green Dot Public Schools are unionized. Last year, teachers at a charter school in Massachusetts voted to join to join the local Teamsters union; according to Education Week, this was because “staff members, worried by anti-charter sentiments, feared they wouldn’t get fair representation from the local teachers’ union.”

Presently, Palm Lane Elementary employees are union members, but that might not be the case if the school re-starts as an independent public charter school. The Anaheim Elementary Education Association (AEEA) and the California School Employees Association, like other unions, are businesses: they’re in the membership business. Fewer members means less revenue.

AEEA and CSEA weren’t organizing all these “parent information meetings” last year, when Palm Lane Elementary parents were knocking on doors and asking other parents to sign the Parent Trigger law petition and when it might have had an impact on whether the petitioners could gather sufficient signatures. Now, facing the prospect of a charter school in which the employees night not be bargaining unit members, union activists have pulled out the stops to try and discredit the charter petition.

Many of the same unionists who were at Palm Lane Park yesterday were standing outside of the school this afternoon, trying to convince parents they have been misled about the charter school petition and what it means: 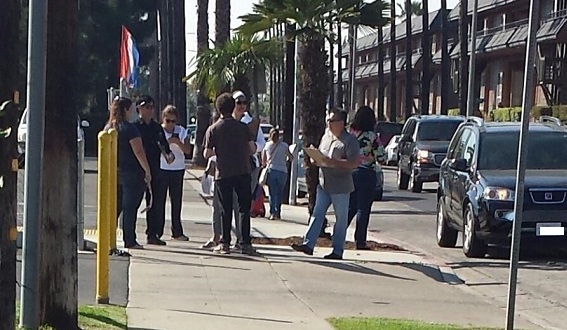 Nearly 70% of Palm Lane Elementary School parents signed the Parent Trigger petition, and believe converting their school to charter status offers their children and future Palm Lane Elementary students a superior opportunity to obtain a better education.  That should be the primary consideration here, not how re-starting Palm Lane as a charter will impact membership in the AEEA and CSEA.