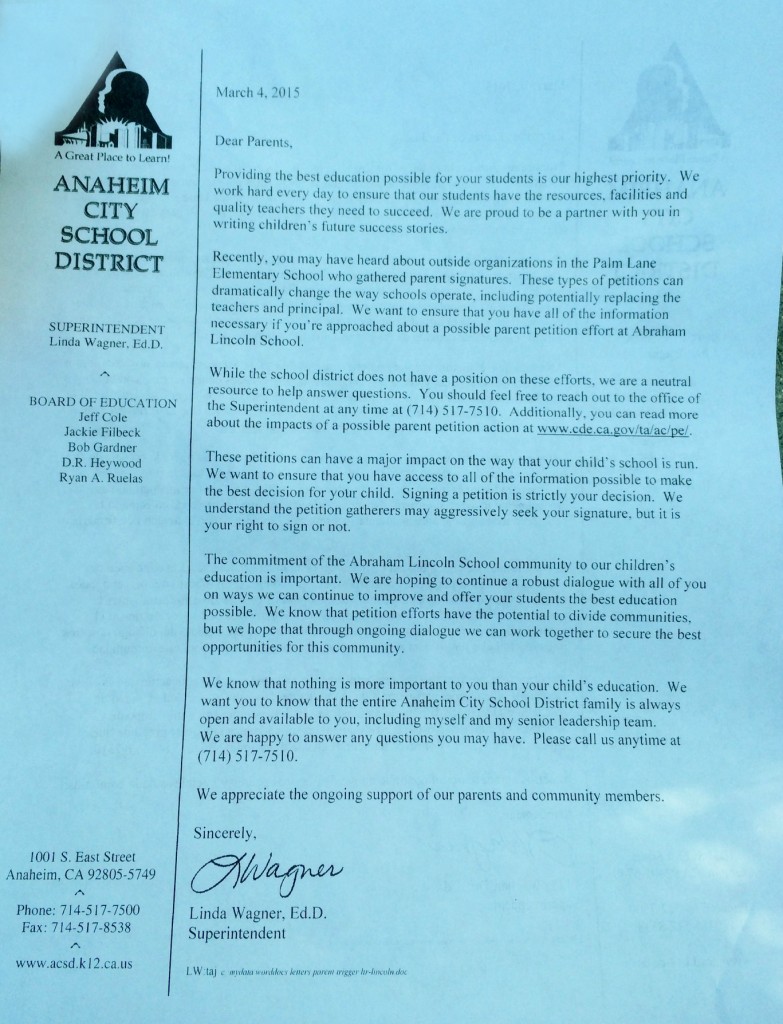 According to my sources, parents at several other ACSD schools received an identical letter, with only the name of the school changed.

No reasonable, fair-minded person could honestly characterize this letter as merely the district proactively informing parents about the Parent Trigger Law. If it had, the letter’s language and tone would have been anodyne.

This is not a communication from a “neutral resource,” but rather an attempt to poison the well in case Parent Trigger Law petitions are mounted at other ACSD elementary schools. The purpose of this heavy-handed tactic is to alarm parents; to put them on guard and more reluctant to sign a petition in the belief it might harm their school.

If Superintendent Wagner’s intention is – as she says in the letter – to “ensure you have all the information necessary,” then why does she only share some information – that which would tend to bias parents against signing a Parent Trigger petition? Especially a talking point that is also a staple scare tactic the school unions have been using to spook Palm Lane parents. Furthermore, parents could misconstrue Wagner’s vague wording to mean the mere act of signing a Parent Trigger petition could lead to teachers losing their jobs; that may be intentional.

Wagner goes on to warn parents that petitioners might “aggressively” solicit their signatures and describes Parent Trigger Law petition drives as having “the potential to divide communities” – while Wagner and the district want to “work together” using “ongoing dialogue” to “secure the best opportunities for this community.” In other words, Wagner paints parents seeking to avail themselves of the provisions of the Parent Trigger Law as aggressive and divisive, while she and the ACSD educracy represent the forces of sweet reason and cooperation. 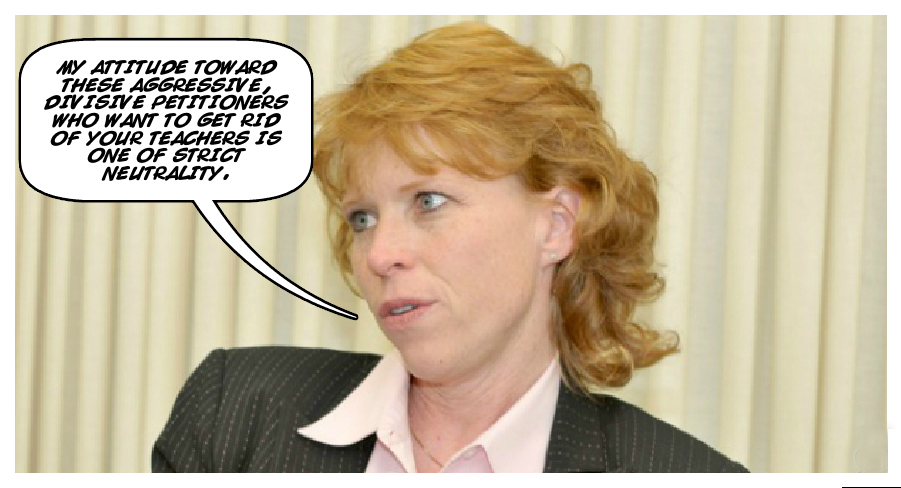 Wagner’s assurance to parents that “the school district does not have a position on these efforts” is a hollow one. The accumulation of the Wagner and the Anaheim City School District’s actions throughout the Palm Lane Elementary charter petition process has been that of an institution that opposes Parent Trigger Law petition drives. The district has given the cold shoulder to this group of Palm Lane parents from the beginning: preventing their use of school grounds to meet;  Wagner sending out a similarly inflammatory, misleading letter to Palm Lane parents that regurgitated unsubstantiated charges by the school unions; the district leadership formulating, just days after the petition was submitted, a strategy for rejecting the petition; the district refusing to enlist the help of petitioners in verifying signatures, even though the law expressly permits that.

That obstructionism continues even now, as the 60-day clock for Palm Lane parents to rectify petition deficiencies is ticking: Wagner has refused to turn over the names of the 121 petition signatories the district claims were ineligible to sign. Given the hostility of the ACSD administration to the Palm Lane petition effort, the petitioners are understandably reluctant to take the district at its word.

This and other examples of the Anaheim City School District’s biased and decidedly non-neutral behavior gives added impetus to the suggestion by the OC Register editorial board to entrust the signature verification to a third party such as the Orange County Department of Education.