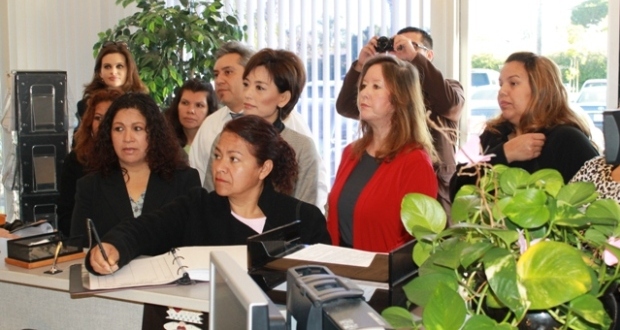 When parents seek to convert a school to charter status under the state Parent Trigger Law, it is clear from the statute that the role played by the school district in which the school is located is supposed to be a neutral one.

However, what the Palm Lane Elementary parents have experienced for nearly a year is an Anaheim City School District that has shed any pretense of neutrality and assumed the role of adversary. In the wake of a Superior Court ruling in which the judge castigated the ACSD’s behavior during this process while ruling the parents’ Parent Trigger Law petition has sufficient signatures, the ACSD Board of Education is doubling down on that adversarial role.

At it’s meeting this past Tuesday, July 22, the ACSD Board of Education complied with the court ruling by rescinding its February 2015 denial of the Palm Lane parent trigger petition and “allow Petitioners to immediately begin the process of soliciting and selecting charter school proposals.”

However, during its earlier closed session meeting, the Board also unanimously voted to spend more money litigating against the efforts of those same parent to establish the charter school. Not only is that an insane division of the district against itself, it is arrogant and wrong. And expensive.

At the same meeting, the Board increased the budget for “legal services on an as-needed basis during the 2014-15 school year” from Fagen, Friedman & Fulfrost of Los Angeles – more than doubling it from  $305,000 to a not-to-exceed amount of $678,000. Fagen, Friedman & Fulfrost has been representing ACSD in the Palm Lane litigation.  [The ACSD also used the law firm to review the charter school petition application from Excellence Performance Innovation Citizenship (EPIC); the recommendation was – surprise! — for denial, and the Board complied at this Tuesday’s meeting.]

While the Fagen, Friedman & Fulfrost agenda item didn’t explicitly link that court battle to the Palm Lane charter litigation, a district spokesman did tell me that much of this increase was driven by the cost of complying with a “very big PRA.” I know the ACSD was subject to just such Public Record Act requests by lawyers helping the Palm Lane parents, so it is reasonable to attribute the need is huge budget increase to the decision to appeal the court ruling.

Rolling with the Robocalls
The day after last week’s Superior Court ruling, the ACSD recorded a robocall to parents, saying the court  had ruled in a “lawsuit originated by a number of parents and outside groups in regards to Palm Lane Elementary,” sugarcoating the district’s February denial of the petition as an attempt to “pursue clarity on many provisions of the law in regards to the action originated by the parents, and to confirm if they applied to our school or not.” The district robocall went on to tell parents Palm Lane Elementary would not be converted into an “experimental school” for the coming school year, but that “it is probable that there will eventually be changes in the format of the school.”

Not very informative public information outreach. No mention of the Parent Trigger Law and only one, indirect reference to converting Palm Lane Elementary.

However, the district took pains to ascribe the lawsuit to mysterious and sinister “outside groups.” This is consistent with the Anaheim City School District’s communications with parents during the Palm Lane charter petition process: sending letters home with students to warn parents about “outside groups” who would try to get them to sign to the petition. Never any warnings about “outside groups” like the California Teachers Association holding meetings for parents to sway them against the parent trigger petition, or the throng of school union members from other districts who swarmed the February meeting at which the ACSD Board rejected the Palm Lane petition. Unlike the Palm Lane parents, the school unions are outside interests with PACs that are generally the decisive factor in school board elections.

“Educating” Palm Lane Parents About Court Ruling
The Anaheim City School District dragged its feet and obstructed petitioners during the parent trigger petition process, but when it comes to “educating” Palm Lane parents about the prospect of converting their school to charter status, the ACSD moves like greased lightning.

Another robocall went out to Palm Lane parents on Wednesday night, inviting them to attended meetings at the school today from from 9:00 to 10:00 a.m. and from 1 to 2 pm, and on Monday, July 27 from 5:00 to 6:00 p.m. Hopefully, it will be a neutral, objective and candid presentation on how Judge Andrew Banks ruled and what the next steps are according to the Parent Trigger Law, and not an exercise in alarming the parents.

The Palm Lane parents won. The ACSD lost. Superintendent Linda Wagner could not wage guerrilla warfare against the Palm Lane parents without the support, or at least tacit consent, of the Board of Education. It’s time for the elected Board members to end this scorched earth warfare against a group of their constituents and perhaps focus on all those other Anaheim City School District schools – more than half of them –  that also qualify for charter school conversion under the Parent Trigger Law.