Democratic Campaign To “Take Back Anaheim” Is Underway

Remember the promises from supporters of by-district council elections that they would lead reduce special interest influence, bring city government closer to the people, and result in “neighbors electing neighbors” and city council members who were part of the fabric of the areas of Anaheim they represented?  It was hooey, of course – but a large majority of Anaheim voters bought it and voted for Measure L (and M, to expand the council to six members) almost a year ago.

On October 20, the Anaheim City Council adopted the council districts map generated by that same left-wing coalition — or as they like to refer to themselves, “the community.”

On the weekend before that vote, the Orange County Young Democrats organized a Saturday and Sunday precinct walk for Connor Traut for Chair of the West Anaheim Neighborhood Council (and Leonard Lahtinen for Vice Chair). As stated on the OCYD Facebook page:

“Join OCYD this weekend as we begin to take back Anaheim from the Republican Party, by walking in support of Trustees Connor Traut and Leonard Lahtinen to serve as Chair and Vice Chair of the West Anaheim Neighborhood Council.

WALKING THIS SATURDAY & SUNDAY FROM 2-6

The caucus-based election is next week, so we need all hands on deck for this one. Connor and Len are ready to develop a park expansion plan, expand gang prevention programs, and implement progressive policies that will benefit disadvantaged families in their neighborhoods.” 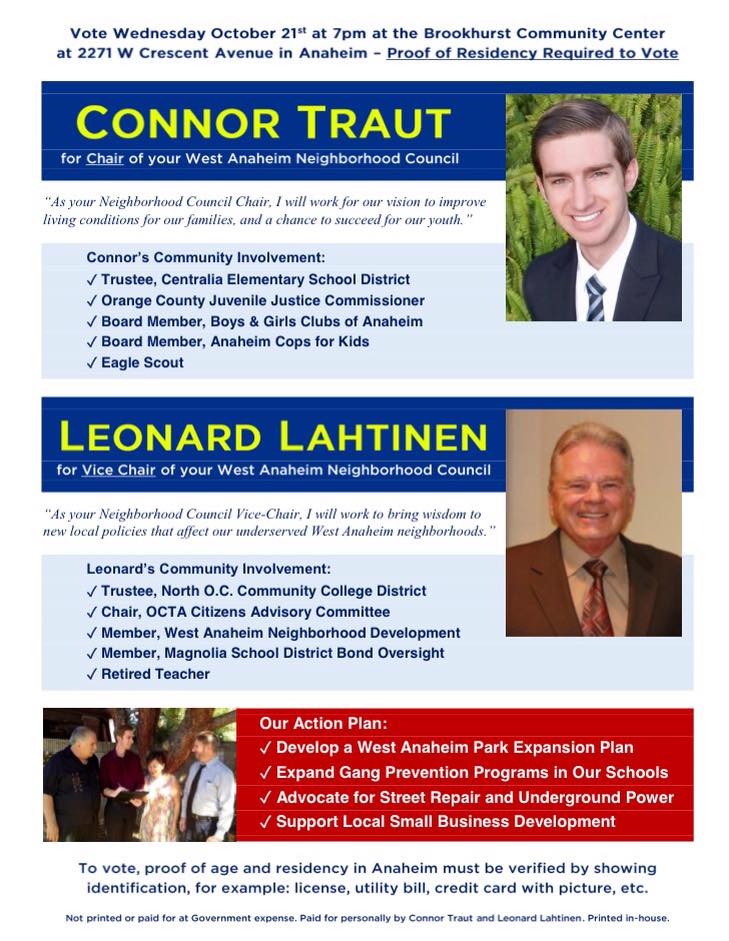 The West Anaheim Neighborhood Council encompasses all of the newly-drawn District 1 and the part of District 2 west of Brookhurst Street:

21-year old Traut was elected last year to the Centralia School District Board of Education. Lahtinen has lived in West Anaheim since 1962, has served on the North Orange County Community College District Board of Trustees since his election to it in 1990. The retired teachers and former teachers union president represents Area 2, which encompasses West Anaheim.

West Anaheim residents who regularly attend these meetings are unaccustomed to organized campaigns for neighborhood council, and were caught off guard. Traut, following a speech promising a number of things that neighborhood council members are essentially powerless to deliver, edged out the incumbent Chair Amanda Edinger by a single vote.

Connor Traut is a nice, bright, sincere, super-smart Democratic activist who less than two years ago was an elected member of the Ladera Ranch Civic Council – 30 miles away in South Orange County. Connor’s family moved there from Anaheim in 2000, and moved back to Anaheim at the end of 2013.

Traut currently resides in District 1, and word is he intends to run for city council from that seat in 2016 (although Traut would likely step aside in favor of Councilman and 46th Congressional District candidate Jordan Brandman should the latter not make the November general election ballot). Neighborhood councils lack any real power, but “Chair, West Anaheim Neighborhood Council” would make a very good (though legally dubious) ballot title.

The “neighbors electing neighbors” promises of the council district proponents was always empty rhetoric meant to convince voters that passing Measure L would lead to electing long-time residents of their area to the city council. It’s no surprise that reality is much different. There’s little to prevent candidates from moving around the city into the most politically opportune district, regardless of where they have been living – and good luck getting any traction with charges of carpetbagging.

Connor Traut moved to Anaheim less than two years ago, and he’s now chair of Neighborhood Council for West Anaheim — a radically different place from the modern, affluent Ladera Ranch community where he spent most of his life. Traut is about public service and there’s nothing wrong with being motivated and ambitious — but these maneuverings illustrate the emptiness of Measure L campaign promises and the reality that the council districts campaign was about re-structuring city elections in order to tilt them toward Democratic candidates. 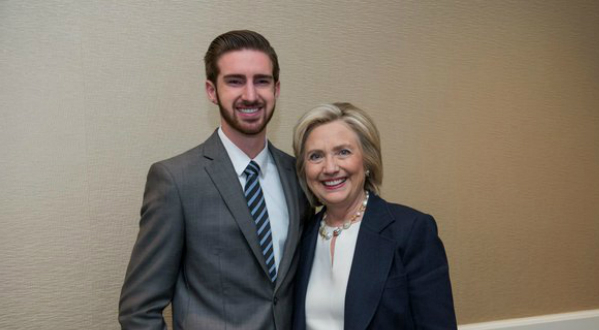