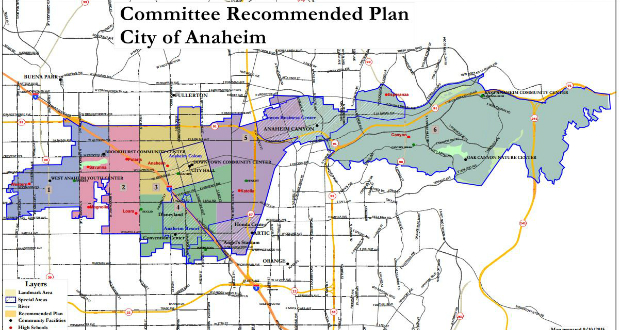 Districts 1, 3, 4 and 5 will be on the ballot this year. After the November election, a random drawing will determine which of those four will henceforth be on the non-presidential year ballot with Districts 2 and 6.

So who is running?

Only one candidate has filed to run in the most west-ward of the two West Anaheim council districts: realtor Orlando Perez. Judging by his Facebook posts, he’s a Republican of the Tea Party persuasion. According to people who have spoken with him, he’s nice, earnest but still learning about city issues.

It’s assumed Centralia School District Board of Education member Conor Traut also plans to run here. Traut is a Democrat who lived in Anaheim as a small child, grew up in Ladera Ranch, then moved to Anaheim at the end of 2013 and ran for the Centralia school board in 2014 at the age of 20. In October, he led a OC Young Democrat-backed surprise attack to capture the West Anaheim Neighborhood Council as part of what the OCYD’s termed a campaign to “take back Anaheim.” This did not sit well with long-time West Anaheim activists.

District 3
Councilman Jordan Brandman lives in District 3, and will stand for re-election there. He will almost certainly be challenged by Jose F. Moreno, the leftist academic who was the name plaintiff in the Moreno v. City of Anaheim lawsuit that precipitated the shift from at-large to by-district elections. The constituencies of the left-wing coalition behind the by-district elections project seemed assured Moreno will win – their confidence based on Moreno being the top vote getter in that part of Anaheim when he unsuccessfully ran for council in 2014. Also, Moreno and the OCCORD-UNITE cadres have been working to co-opt the anti-STR (short-term rentals) activists in hopes of garnering their votes.

That’s apples and oranges, and running against an incumbent who was the top vote-getter in his own first – and by contrast successful – council is a different ball game.

District 4
Mayor Pro Tem Lucille Kring lives here, and is up for re-election. Her detractors tend to discount her based on her losing 2014 mayoral run, but she’s running as the incumbent this time, not against an incumbent. Furthermore, the facets of by-district elections praised by its proponents  – fewer voters with whom to communicate, generally less expensive to run – work in her favor.

The only other declared candidate is a Robert Williams, who lives near East Street and Lincoln Avenue. He filed his Candidate Intention Statement on November 30 of last year. According to his LinkedIn profile, Williams has been an emergency medical services (ES) professional. He has also created a LinkedIn page to fundraise for his council candidacy.

Judging by his re-tweeting the CTA endorsement of Kamala Harris for U.S. Senate, I’m guessing Williams is a Democrat. He takes quite a few Twitter shots at Jose Moreno, whom he mistakenly thinks is running in District 4. 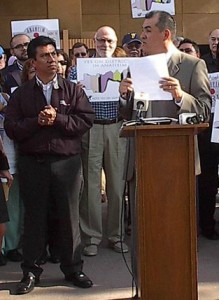 Word on the street is UNITE-HERE staffer Martin Lopez intends to run. Lopez has been a leader of the district elections political project, lives in the Sherwood Village condos by the Convention Center. Sherwood Village is at ground zero in the STR controversy, and Lopez has been at the forefront of efforts to ban them entirely.  At the same, his politics are waaaaaay to the Left – far more than most Anaheimers.

District 5
There’s no incumbent councilmember in District 5, and the only declared candidate is Ana R. Martinez, who lives in an apartment near Ball Road and State College Blvd.

There you have it, with more surely to come.