There’s been a flurry of council candidate filings, as four individuals have pulled papers in the last several days. Here’s a quick rundown of who is running where, as well as people said to be considering a race. 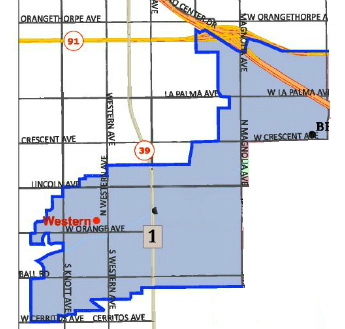 Although 56,000 people live in District 1, only 19,000 are registered to vote – and just 6,649 actually cast a ballot in the last city council election (all voter numbers in the article are from November 2014).

There are two declared candidates: Steve Chavez Lodge (as reported yesterday) and Orlando Perez; both are Republicans. Lodge lived in West Anaheim in the 1980’s before moving to the eastern part of the city, and moved back to what is now District 1 two years ago.

There are two Demorats who are of have been considering a run: Connor Traut and Leonard Lahtinen, representing opposite ends of the age spectrum. Traut is 22 or 23 years old, a very progressive Democrat, and member of the Centralia School District Board of Education. He lived most of his life in Ladera Ranch in south Orange County before relocating to Anaheim in time to run for the Centralia school board in 2014.  It was widely assumed his out-of-nowhere election to the West Anaheim Neighborhood Council was a prelude to running for council, but the fact he has now been accepted to Chapman Law School leaves observers wondering if that will cause him to delay his council ambitions.

Leonard Lahtinen has been elected and re-elected to the North Orange County Community College District Board of Trustees since 1992. I’m not certain of his age but considering Lahtinen earned his college degree in 1955, that would put him in his early eighties (although vigorous). He ran for city council in 1998, finishing fourth with 13.7% (the winners being Lucille Kring and Frank Feldhaus). 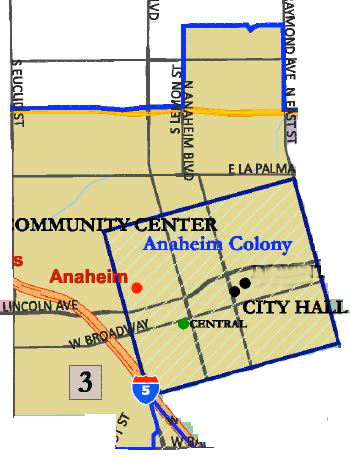 Councilman Jordan Brandman was the top vote-getter in 2012, running at-large. As he lives in District 3, he is running for re-election from it.

Jose F. Moreno, the leftist practitioner of racial politics and chair of the Cal State Long Beach Chicano Studies Department – whose past-time seems to be serving as plaintiff in litigation serving progressive political goals. Moreno ran unsuccessfully for council in 2014.

Linda Lobatos, who ran unsuccessfully for the Anaheim Union High School Distict Board of Education in 2014. She is a former ally of Moreno and his campaign manager Al Jabbar, but subsequently had a falling out with them.

Moreno supporters point out that he was the top vote-getter in what is District 3, which is slightly less than 50% Latino. However, Brandman was also the top vote-getter in Latino precincts in 2012, despite the presence of multiple Latino candidates on the ballot. Furthermore, Lobatos’ candidacy could fracture the Latino vote – assuming the validity of the belief held by district elections supporters that Latinos primarily vote their ethnicity. 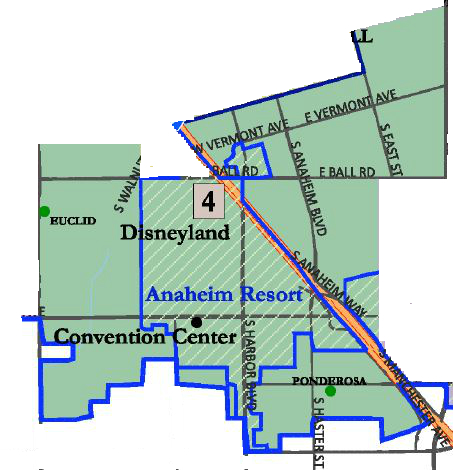 District 4
This district, home to the Resort Area, is one of the two Latino-plurality districts and has a population of 56,000. There are nearly 16,000 registered voters, of whom only 5,735 exercised their right to vote in November 2014 – the lowest voter participation rate of any Anaheim council district.

The incumbent, Mayor Pro Tem Lucille Kring, officially filed for re-election on March 2. She has been on the ballot in Anaheim more than any of the current candidates: elected to the city council in 1998, 2006 and 2012; unsuccessfully campaigns for Anaheim Mayor in 2004 and 2014, and a state Senate run in 2010.

It’s been rumored for a long time that UNITE-HERE staffer Martin Lopez intends to run. Lopez has been a leader of the district elections political project, lives in the Sherwood Village condos by the Convention Center. Sherwood Village is at ground zero in the STR controversy, and Lopez has been at the forefront of efforts to ban them entirely.  At the same, his politics are way to the Left – far more than most Anaheimers.  However, with Rev. Ferraras on the ballot, it’s questionable how much room there is for two far-left council candidates. 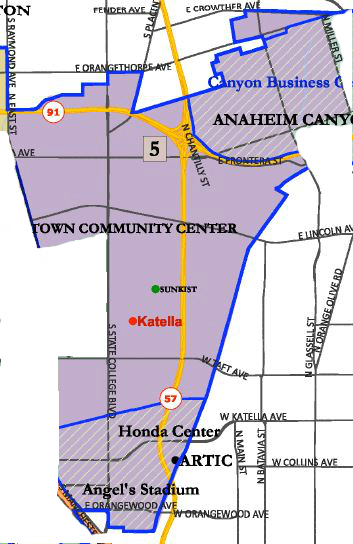 District 5
This is the other Latino-plurality district. It has a population of approximately 56,000 and 20,000 registered voters. Of those, 7,311 actually voted in November 2014.

Thus far, only two people have officially jumped into the race. One is small businessman and long-time civic activist Steve Faessel (you can read more here), a Republican who will be a formidable candidate. The other is Ana R. Martinez, who lives in an apartment near Ball Road and State College Blvd and appears to have done nothing beyond filing a candidate intention statement on January 28.

Although he hasn’t filed any official paper work, Mark Lopez, deputy chief of staff to 4th District Supervisor Shawn Nelson, also plans to run: he spoke to the Lincoln Club of Orange County’s local elections committee this week to ask for the Club’s endorsement. Lopez is also a Republican.