Another combatant has entered the lists in Anaheim’s Council District 4: Joe Moreno.

I’m assuming this is the Jose “Joe” Moreno who ran for city council in 2014, finishing last: 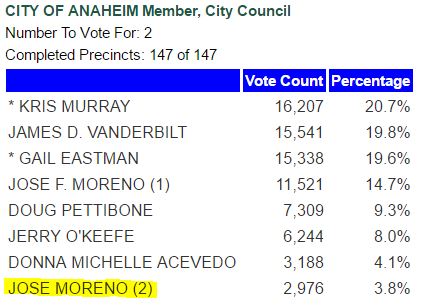 UPDATED: I reached out to Joe Moreno. Here’s his response:

“Yes. I did file on Monday.

My campaign is going to be about continuing to support the resort industry and enhancing the communication to all how much this resort has helped all Anaheimers.

I’m a die hard Angel Fan, since my little league days, and would support the Angel’s organization creating a San Diego like Petco park here.
I envision the city building more parks for leisure and sporting activities, with a focus on youth. I would like to see either city subsidized low cost or free year round sport programs.

Lastly, I will support the city subsidizing educational programs at our youth centers that are located in areas where schools have been underperforming.”

District 4 is home to the Resort Area and is one of the two Latino-plurality districts and has a population of 56,000. There are nearly 16,000 registered voters, of whom only 5,735 exercised their right to vote in November 2014 – the lowest voter participation rate of any Anaheim council district.

The incumbent, Mayor Pro Tem Lucille Kring, officially filed for re-election on March 2. She has been on the ballot in Anaheim more than any of the current candidates: elected to the city council in 1998, 2006 and 2012; unsuccessfully campaigns for Anaheim Mayor in 2004 and 2014, and a state Senate run in 2010.