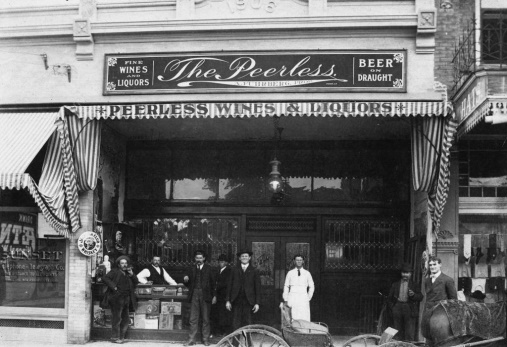 From the Anaheim Brewery blog:

“Peerless Porter” is named after John Cassou’s Peerless Saloon at 106 N. Los Angeles Street (what we know as Anaheim Boulevard).  According to advertisements in the Anaheim Gazette, the Peerless sold fine wines, liquors, and cigars, and  “Anaheim Beer on draft.”

One could argue for quite a long time (over quite a few pints) about whether stout came before porter, or porter before stout.  (As it happens, I’m one of the former.) According to Dr. Michael Lewis, in his book Stout, the first use of the word “stout” appears in a letter written in 1677.  “we will drink to your health in both stout, and best wine,” it says.  Some years, later, in 1722, Ralph Harwood, the owner of the Bell Brewhouse in Shoreditch, East London, is credited with “inventing” porter.  Though there isn’t a lot of hard-fact proof, the story goes along these lines: 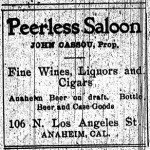 In the pubs of the day, beer was served cask-conditioned, usually poured from more than one cask into a mug or tankard.  There were probably several reasons for this.  Malting at the time was inconsistent, resulting in beer flavors that could be unpredictable.  Blending from several (sometimes as many as six!) casks allowed the barman to mix these various flavors for a more predictable result.  There’s also a tax angle – hops were much less taxed than malt and the coal used to make it.  Barmen would blend highly hopped, lower strength (and less expensive) beers with sweeter, malty, expensive beers to make them go further.  Some were known to blend in stale, slightly “off” beer, rather than dump it!

You can read the rest by clicking here.