This evening, two progressive academics – Daniel Flaming and Peter Dreier – will present to the Anaheim City Council their study supporting a proposed initiative by the Coalition of Resort Labor Unions (CRLU) to boost the minimum for targeted Resort business from the current $11 to$18 an hour by 2022.

The study itself was paid for the same union coalition – led by radical UNITE-HERE Local 11 – that is sponsoring the $18 per hour minimum wage initiative.

The unusual, highly political presentation is on the agenda at the request of District 3 Councilman Jose F. Moreno, who owes his narrow 2016 election victory in large part to the efforts of UNITE-HERE Local 11, which flooded District 3 with pro-Moreno precinct walkers. UNITE-HERE Local 11 – via it’s “Citizens for a Better Anaheim” committee – spent $250,000 on political field operations in the 2016 Anaheim council elections, primarily to elect Moreno.

UNITE-HERE is recouping its investment.

Some things to consider and questions to ponder in anticipation of tonight’s presentation:

What Is The “Economic Roundtable”?
The Economic Roundtable is a union-centered non-profit that focuses on generating research to support union policy initiatives. It’s funding comes primarily from unions and progressive advocacy groups such as the Service Employees International Union State Council; the LA County Labor Federation; and the Los Angeles Alliance for  New Economy (LAANE). The latter receives funding from UNITE-HERE and report co-author Peter Dreier sits on its board of directors.

The Economic Roundtable – as this 2014 article co-authored by Flaming puts it – is engaged “serving LA’s social justice movement.” In other words, it supports greater government control of the economy, wealth re-distribution and other discredited economic nostrums.

Dreier is a college professor….of politics, not economics. He’s a left-wing activist who on Sunday shared a Facebook post calling for a boycott of “MyPillow,” the allegedly amazing sleep aid ubiquitously hawked in late-night TV ads. The reason: MyPillow founder Mike Lindell is a Trump supporter. Truly, the mark of a serious mind. 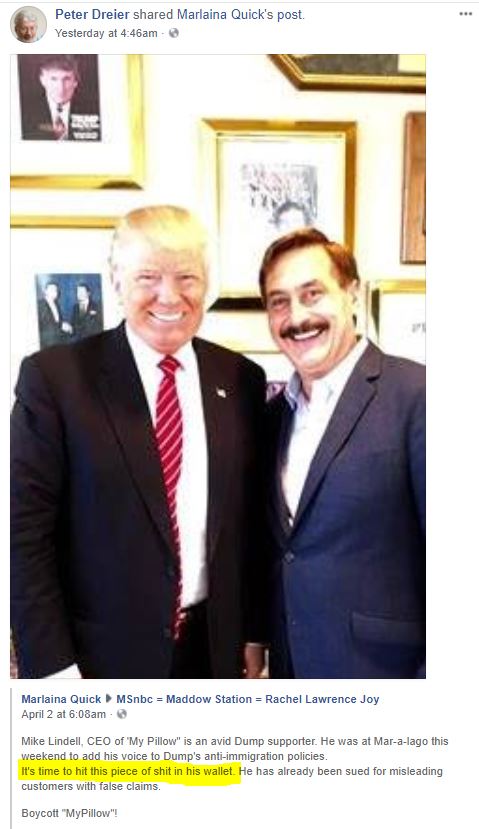 It’s important to understand these gentleman will sit before the council as not ad disinterested academics saying “Guess what we discovered in the course of our research.” They are trying to advance a political agenda and their report was written as part of a larger effort to secure a particular political outcome.

Selection Bias And Other Flaws
The Economic Roundtable survey received responded from approximately 5,000 of 30,000 Disneyland Resort employees – skewed from the get-go by limiting itself to only union members and excluding the 13,000 non-union Resort employees. Again, this goes to selection bias and approaching the project with a desired result in mind.

There is no breakdown among those who did respond of which of the Resort unions they are members, complicating the task of understanding what type of work they do for the Resort.

The survey goes even farther than the Resort unions’ initiative by calling for a $20 minimum wage – an even more unrealistic and economically destructive wage than the initiate. The report pegs a “living wage” at $26 per hour – begging the question of why the authors’ limit their proposal to $20 per hour and the union coalition aims for the comparatively miserly $18 by 2022? Why stop short of $26 unless the union coalition and the report authors recognize that arbitrarily boosting the minimum wage has a negative impact on job creation, hours available for work and business formation.

According to the Economic Roundtable study, 19% of Resort union coalition members live in Anaheim. At the same time, that accounts for only 2% of the city’s working-age population. Keep in mind that only a portion of CRLU members are making minimum wage.

In other words, if the $18 wage initiative qualifies and is approved, it will only impact a fraction of Anaheim’s workforce. So how exactly does that address Anaheim’s housing affordability issues? Even if one believes the report’s dubious claims about increasing job creation and tax revenues, it stands to reason the primary beneficiaries would be LA County and Anaheim’s neighboring cities.

It’s worth noting the principal author of the report, Daniel Flaming, previously oversaw Los Angeles County’s affordable housing programs. Armed with that experience, shouldn’t he know that housing affordability – or more accurately unaffordability – is driven far more by factors such as government fees and regulations, environmental red tape, and NIMBY opposition than the minimum wage. Why is that absent from the report?

Pro-Union Publicity Stunt
The bottom line: tonight’s hearing is a publicity stunt arranged by Councilman Jose F. Moreno to provide free media  for the CRLU’s signature gathering effort – and it’s being done on the taxpayers’ time and dime.