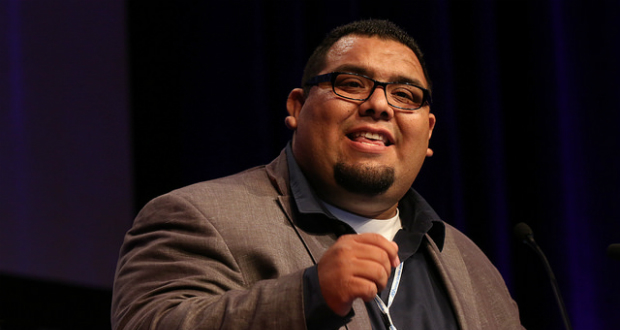 Jose Lara has a long-track as a radical leftist activist and leader of the Ethnic Studies Now Coalition, a political advocacy group whose goal is to require California high school students to take an ethnic studies class in order to graduate. He was named Social Justice Teacher of the Year by the nation’s largest teachers union, the National Education Association, and has been lobbying the state legislature to pass AB 2772, which would have imposed ethnic studies as a high school graduation requirement. Ultimately, the legislature amend  the bill to set up a pilot program in which 10-15 school districts would opt-in to require it for high school graduation.

In a July 27, 2015 article in NEA Today, Lara said, ““Keeping students from learning about their own history is structural racism, and as educators we have the responsibility to do something about it,” he said.

In other words, Lara believes schools without an ethnic studies class are, by definition, racist. That is a radical position far outside the mainstream, and illustrates the extremes to which American progressive thinking has devolved. Racial segregation in public education, the military, public accommodations, etc – that’s structural racism. But to leftists like Lara, simply not having Ethnic Studies on the curriculum is enough to condemn a school as racist. Like so much in the world of progressives and social justice warriors, Lara’s belief is far removed from the real world in which reasonable people live.

Admiration For Mass Murderer Che Guevara
Lara’s political radicalism is disturbingly on display in this 2010 profile on RT (Russia Today – an English-language television network funded by the Russian government). The feature focuses on Lara’s Centro Cultural Fancisco Villa, “where the seeds of revolution are being planted.”

“The walls here are decorated with foreign revolutionaries like  Ho Chi Minh and Che Guevara.”

What Lara forgets or dismisses is Guevara was a truly bloodthirsty revolutionary who reveled in executing those who disagreed with his revolutionary ideas. He helped topple the Batista dictatorship and then helped Fidel Castro liquidate other anti-Batista rebels and established a far worse, far more oppressive totalitarian dictatorship that continues today.

“If the missiles had remained we would have used them against the very heart of the United States, including New York,” Guevara said in November 1962. “We must never establish peaceful co-existence. We must walk the path of victory even if it costs millions of atomic victims.” 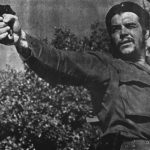 Ho Chi Minh was the leader of a brutal Communist dictatorship that nearly 60,000 Americans died fighting against to [prevent its conquest of South Vietnam. Orange County’s huge Vietnamese community is the result of South Vietnamese fleeing the oppression of the Hanoi regime Ho founded.

Keep in mind Jose Lara views these guys are role models for his students.

“We’re talking about these figures who did revolutionary change,” says Lara. “That’s something we talk about inside the classroom.”

How ignorant or ideologically blinded – or both – does a person have to be to idolize Che Guevara, or hold up Ho Chi Minh as a “social justice” role model. To do so requires turning a blind eye to the plain truth of history. Lara clearly sees himself as a champion of the oppressed, but by his choice of heroes he is actually dismissing the mass oppression of the powerless at the hands of revolutionaries like Guevara and Ho.

“What we’re seeing here in the United States is a resurgence of outright political, cultural, social oppression,” claims Lara. The reporter notes that Lara “suggests that aspects of socialism might help accomplish” greater equality.

“To him, the route to revolution begins with organizing. The message is loud and clear with some of his students.”

“Revolution always starts in the hearts and minds of people,” Lara tells the reporter, who adds this post-script: “Hearts and minds that have some very large figures to look up to.”

It’s not surprising that a “social justice educator” like Lara – who is perfectly comfortable using the classroom to impart radical politics to his students – would be hired as an assistant principal in the Anaheim Union High School District (AUHSD). In fact, he’s a perfect fit in the AUHSD of Superintendent Mike Matsuda – a long-time progressive political activist. Under Matsuda’s regime, the AUHSD has become suffused with progressive politic. Matsuda and his principal cheerleader on the AUHSD Board of Education, Al Jabbar, use public resources to turn the district into a center of political resistance to the charter school movement: paying for screenings of an anti-charter school documentary; waging a public relations campaign for a moratorium on new charter schools in Orange County; using students for weekend neighborhood outreach walks in hopes of nipping pro-charter enthusiasm in the bud.

AUHSD is also very big on “civic engagement” – a public education euphemism for cultivating students to become progressive political activists. Ryan Ruelas, an Anaheim High School history teacher and member of the Anaheim Elementary School District Board of Education, has developed this into an art form: the AnaheimBROS student club he founded and advises provides a ready supply of precinct walkers for his school board campaigns and the campaigns of Ruelas allies like Jabbar, Anaheim Councilman Jose F. Moreno. This fall, they’ll be knocking on doors for Mark Lopez – the former Supervisor Shawn Nelson aide who recently secured a teaching job at Anaheim High School and is now running for the AESD Board of Education with Ruelas’ backing.

Until recently, AnaheimBROS club officers called themselves “The Politburo” – the term for the ruling body of a Communist Party – with Ruelas’ knowledge: 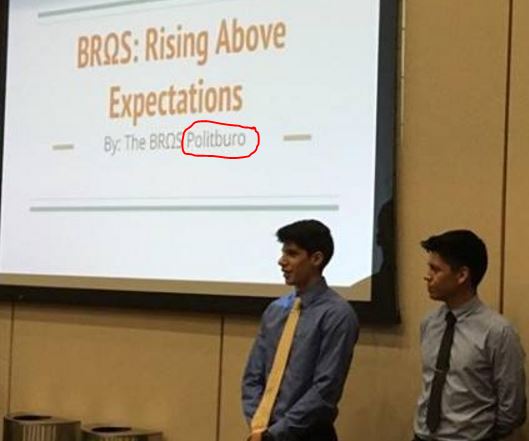 The AnaheimBROS Politburo pitching the CTA for a funding grant.

It wasn’t until partner site OC Daily reported on this practice that an embarrassed AUHSD directed Ruelas and the BROS to stop using the term Politburo.

Even more than Lara’s enthusiasm for Communist revolutionaries like Che Guevara and Ho Chi Minh, what makes him simpatico with the prevailing zeitgeist of Matsuda’s administration is his apostleship for injecting Ethnic Studies – which is really progressive identity politics masquerading as an academic discipline – into high school classrooms. The first high school Ethnic Studies class in Orange County was launched in 2015-2016 – with Mastuda’s support – at Loara High School for history teacher Jose Paolo Magcalas.

In this 2016 paper for the UCLA Center X (“Transforming Public Schools”), Magcalas recounts his motivation. It reads like a re-education camp confession: before he could use Ethnic Studies to “benefit and empower the hundreds of oppressed students in my high school,” Magcalas writes that he first had to “unlearn the oppressive pedagogical methods” he had used to teach “a Eurocentric perspective of United States history to hundreds of students in my community.”

“I also needed to reclaim my own history and epistemology,” writes Magcalas in his cultural Marxist mea culpa. “I am sad to admit that I was the oppressed oppressor.”

In 2016, Magcalas was elected to the Anaheim Elementary School District Board of Education when he was lucky enough to run unopposed.

Since then, Ethnic Studies has expanded within AUHSD. It was added to the Anaheim High School curriculum starting with the 2016-17 school year. Students at AUSHD’s Savanna, Katella and Magnolia High Schools can enroll in Chicano Studies at Fullerton College through the district’s dual enrollment program.

Approximately 500 7th graders at Sycamore Junior High School were enrolled in the “Multicultural Awareness” course during the 2017-18 school year. In the Anaheim Union High School District, it’s apparently never too early to teach children to nurse grievances and think of themselves as victims of oppression.

It’s reasonable to expect Dale Junior High students will receive the same treatment now that Ethnic Studies apostle and Che Guevara fan Jose Lara is assistant principal. After all, Lara believes the revolution starts in the hearts and minds of his students.

Lara’s ideology is radical and ignorant, his admiration for bloodthirsty mass murderers like Che Guevara is morally repugnant and his willingness to use the classroom for political indoctrination is appalling. That AUHSD Superintendent Mike Matsuda has hired Lara to influence the formation of young minds – and the fact that Lara’s overt radicalism and racialism is becoming unexceptional within the AUHSD – speaks volumes about the values and direction of the Anaheim Union High School District.