The Anaheim  Resort unions are joining the larger union/Democrat scramble to bolster Ashleigh Aitken’s mayoral candidacy as the election enters the home stretch. 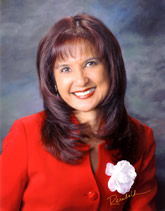 Yesterday, the Democratic Party of Orange County (DPOC) reported spending $17,937 on mail attacking former Anaheim City Councilwoman Lorri Galloway – also a Democrat.  The funding source: the Anaheim Resort unions that are funding the $18 minimum wage initiative (Measure L) campaign. The Yes on Measure L campaign committee transferred $50,000 into the DPOC political action committee, so presumably there is more anti-Galloway – or pro-Aitken – mail to come from the DPOC, which has endorsed Aitken for Anaheim mayor.

The Resort union coalition transferred the $50,000 from the Yes on Measure L committee to the DPOC PAC on October 2 – presumably to fund pro-L member communications. It interesting the Resort unions feel concerned enough about Aitken’s prospects to divert more than a third of those to bolster Aitken. The Democrat attorney and first-time candidate has been a staunch champion of the $18 minimum wage initiative and a vocal ally of the Resort unions’ political agenda. 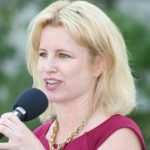 While Aitken has a massive fundraising advantage over Galloway, she’s also at a significant name ID disadvantage as a first-time candidate competing for many of the same voters with a former two-term councilmember has been on Anaheim ballots in 2004, 2008, 2010 and 2014.

Aitken and Galloway tangled at a mayoral candidate forum. Aitken inveighed against Disney’s political involvement and criticized Galloway for accepting a $2,000 campaign contribution from the city’s largest employer and taxpayer, while the former councilwomen dinged Aitken for the hundreds of thousands of dollars that trial attorneys have donated to her campaign.

Galloway’s campaign has put out at least two mail pieces: 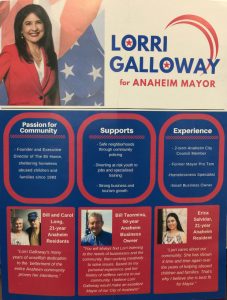 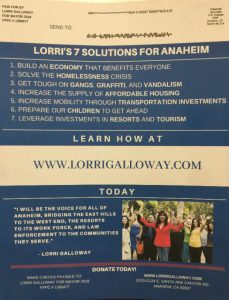 The Galloway campaign also re-purposed the above mailer into a “Republicans for Galloway” piece targeting GOP voters: 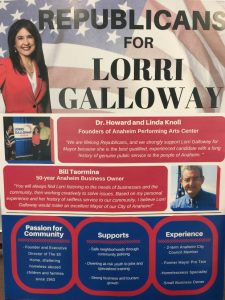 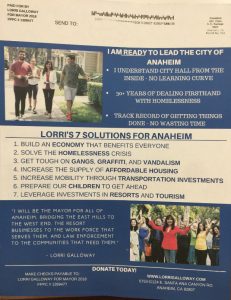