Anaheim Mayor Tom Tait – whom the OC GOP named its Local Elected Official of the Year in 2013 – did his part to boost the Blue Wave by endorsing progressive Democrat Ashleigh Aitken to succeed him. Aitken posted this on her campaign Facebook earlier today: 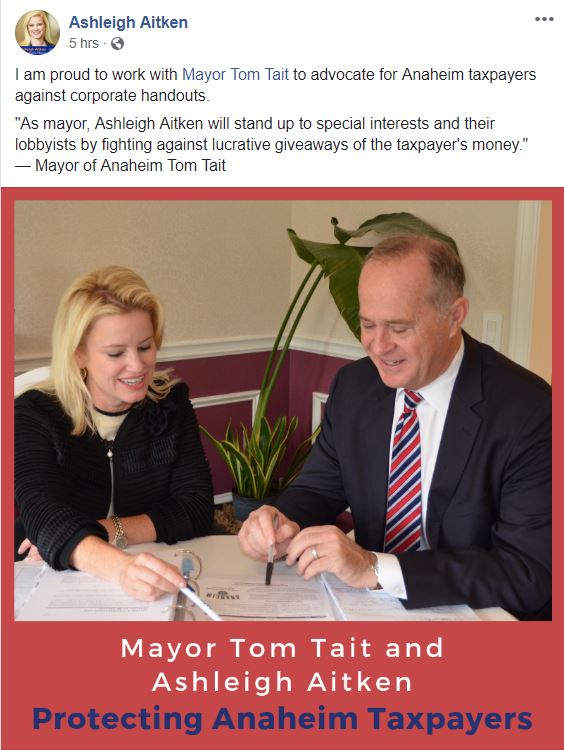 The Aitken campaign also sent out this text message touting the Tait endorsement – along with her endorsement by government employee unions: 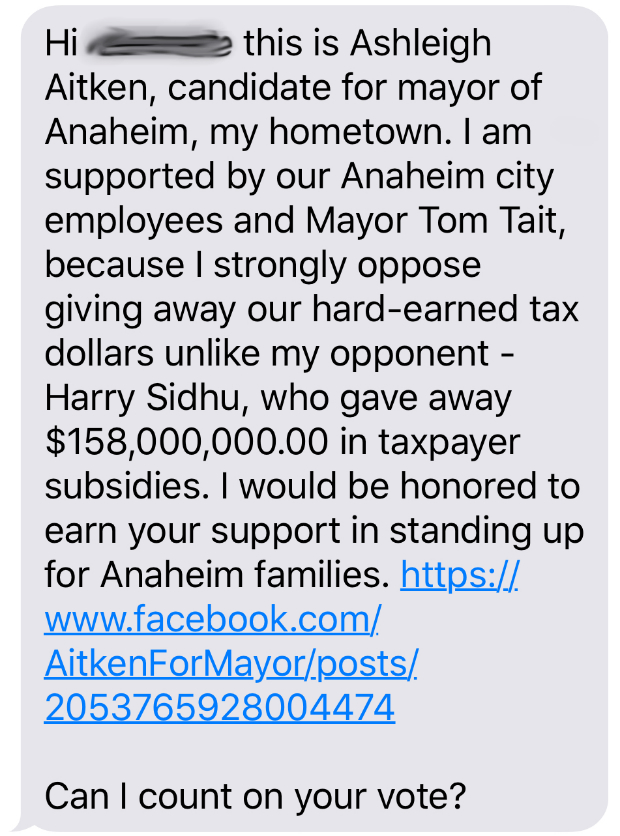 The surprise here is not that Tom Tait is endorsing Ashleigh Aitken – only that it took this long. Openly endorsing her earlier would have undermined efforts by Tait loyalists to prevent the OC GOP from endorsing Harry Sidhu for mayor. Sidhu was only a few votes shy of the endorsement, and the shock of a Tait endorsement of a left-wing Democrat for mayor might have caused the scales to fall from the eyes of even the most deeply in denial members of the OC GOP Central Committee. If any of those members are now having second thoughts about opposing the Sidhu endorsement – too late. You’ve been played.

At least Ashleigh Aitken recognizes something that eludes those recalcitrant OC GOP Central Committee members: this race is between her and Harry Sidhu.

Now they get to watch the Aitken campaign exploit Tait’s conservative credentials for the purpose of electing a progressive Democrat as mayor of OC’s largest city. Too late for a re-vote.

Some might be surprised to see the ostensibly conservative Republican mayor endorsing a left-wing Democrat, but Tait crossed that Rubicon years ago. He served as Republican wingman for the progressive Democrat political project to shift Anaheim to district elections. He unofficially support democratic socialist Jose F. Moreno for city council in 2014 before officially and enthusiastically endorsing Moreno in 2016. That same year, Tait also endorsed another leftist Democrat, Arturo Ferraras, against GOP Councilwoman Lucille Kring in District 4.  He let the Palm Lane parents twist in the wind as Moreno’s school board allies litigated them for two years to prevent Palm Lane’s conversion to a charter school – only intervening late in the game to help Moreno’s gambit to gain influence over the charter formation process.

This year, Tait is supporting Mark Lopez for the Anaheim Elementary School District Board of Education in Area 4. Lopez is the candidate of teachers union and anti-charter school progressives. A few weeks ago, Lopez abandoned GOP to once again become a No Party Preference voter.

So, really – is anyone who is actually paying attention surprised Tom Tait would once again endorse a left-wing Democrat?

Think about it: Mayor Tait has assiduously avoided taking a position on the attempt by Anaheim Resort unions to use local government to dictate wages and turn the city manager into a labor relations cop – but he can endorse a progressive Democrat over a conservative Republican for mayor.

Let that sink in.

The problem is most voters don’t pay such close attention to city politics. They’re busy and frankly – they have better things to do. They still view Mayor Tait as a staunch conservative – which would logically dictate endorsing other conservative Republican voters. Rest assured, the Aitken campaign will leverage that reality and try to use the Tait endorsement to pick up GOP voters under false pretenses. Will it work? That remains to be seen.

What this endorsement does illustrate – and vividly so – is how this obsessive, inordinate focus on tax incentives to attract luxury hotels has so deformed and distorted Tom Tait’s politics that he is campaigning for candidates who reject the principles of the Founding and believe government holds the answers to society’s problems.