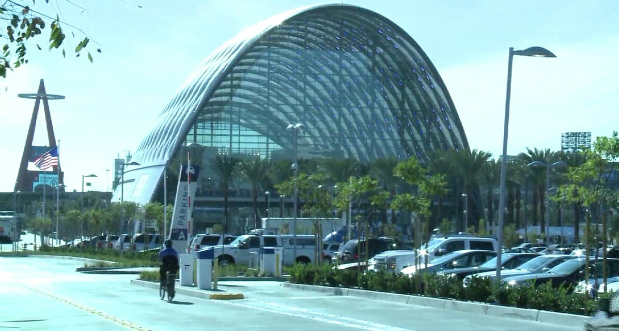 Tonight, is the final regular council meeting for Mayor Tom Tait and Councilmembers Kris Murray and James Vanderbilt – Tait and Murray being termed out, while Vanderbilt lost his re-election bid.

But the agenda is a packed one, and on it is Item 35, an agreement with Anaheim Arena Management (AAM) pertaining to the Honda Center and ARTIC.  AAM is Henry Samueli, the owner of the Anaheim Ducks.

– Anaheim Ducks commit to keep name and play at Honda Center through June 30, 2048.

– All operating expenses are responsibility of AAM through entire term of agreement.

– Anaheim and AAM enter into a 50/50 profit sharing agreement after repayment of loans. The profit-sharing threshold is reduced to 6 million (currently at 12 million).

– AAM must maintain current parking areas related to Honda Center OR relocate parking to a nearby area (and get approval from the City).

– AAM cannot sell or transfer land except to an AAM affiliate.

– If the land is never developed, the City has the right to purchase at the end of the agreement.

– ATCM (an affiliate of AAM) will assume management of ARTIC through June 30, 2048 with 5 five-year extensions.

– ATCM will fund cost of a sign program under the city “Spectacular” Program. Profits will go towards operating costs of ARTIC.

The City Council was briefed on the outlines of the agreement on October 23 of this year, and it looks a like a good one for the city. For one thing, it appears to solve – at least from the perspective of city taxpayers – the issue of ARTIC’s operating deficit.

This has been a sore spot for several years. The city had an agreement in November of 2014 with Clear Channel Outdoor for a new electronic billboard by the station, near the 57 Freeway, which would have generated enough revenue to covert much of the operating revenue gap. However, a rival billboard company paid for a deceptive robocall to Anaheim residents telling them the agreement repeal a billboard moratorium, and they flooded City Hall with protests. A spooked council backed away from the idea.

As good as the deal appears to be, it is hard to miss the hypocrisy in rushing it through. The whole of the agreement is hundreds of pages long, covering various aspects of a complex transaction involving many millions of dollars and enormously valuable city property.

This massive agreement only became available for the public to see at 4:55 p.m. on Friday – on the eve of the Thanksgiving holiday. The council discussion and vote will take place two days before Thanksgiving – and just a few weeks before the newly elected mayor and two new councilmembers take their seats.

What’s the rush – other than Mayor Tait wants to vote on it before he leaves office?

How many times in the past have the mayor and his allies loudly condemned other members of the council for – in their opinion – not providing Anaheim residents with more time to review similarly significant agreements? The mayor went on a public jihad over a non-binding negotiation framework for a stadium deal with the Angels – and one of the reasons was he felt it was rushed through with insufficient public scrutiny. In fact, that framework was ultimately subjected to far more public attention than this AAM agreement.

The same goes for the TOT rebate agreements with Disney and Wincome. In fact, the mayor contended the public needed more time to become familiarized with those agreements, and was incensed when the council refused to delay the vote.

Or when the City Council appointed a new city attorney after the November 2016 election but before the new councilmembers – largely his allies – were sworn in. He objected the decision should be delayed until the new council was seated.

However, those were things the mayor opposed. This, on the other hand, is is his deal – and one he has shepherded through out of the public eye for months. Apparently, that means it is OK to rush it through on the eve of a major holiday when few members of the public are paying attention – and to shut the incoming mayor and councilmembers from any say in an agreement with which they’ll have to live.