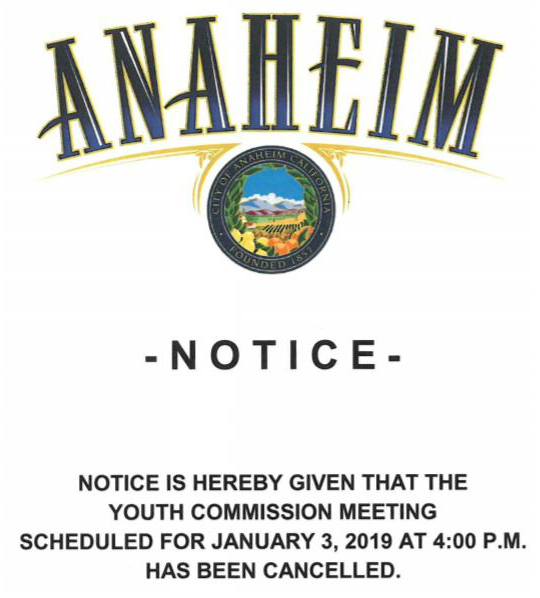 The Anaheim Youth Commission was established in June 2017 by a 6-1 vote of the city council (then-Mayor Pro Tem James Vanderbilt being the lone “no” vote). It’s creation was a top priority for Councilman Jose F. Moreno upon his election to the city council in November 2016.

The Youth Commission term parallels the school year, meeting nine times a year – when it actually meets. During its its 2017-2018 term, 44% of Youth Commission meetings were cancelled because not enough commissioners showed up to form a quorum. Things haven’t improved in the 2018-2019 term: thus far, three of five meetings – 60% – have been cancelled due to lack of a quorum.

As early as March of last year, one of the youth commissioners expressed concerned about low attendance.

Transparency Issues
Although Moreno has made transparency a signature theme, no meeting minutes have been posted since the February 2018 commission meeting. Audio recordings of commission meetings are supposed to be posted on the city website, but only three were posted in 2018 – and none since October of last year. This makes it difficult for the public to asses what, if anything, the Youth Commission is accomplishing.

The Youth Commission is comprised of 21 members. The mayor and each councilmembers makes three appointments, one each from the following age groups:

The latter category seems a little old for a “youth” commission, in addition to creating an odd dynamic of having 14 years serving with 26 year olds. While the name “Youth Commission” conjures the image of high schoolers, one of the commissioners is a commercial real estate consultant who graduated from college three years ago.

Too Political, Too Scattershot or Both?
The final Youth Commission meeting of 2018 was held on November 1 – a few days before the general election. Commissioner Ruby Rodriguez, a Moreno appointee and socialist activist, had agendized a “vote on” Proposition 10, a statewide initiative on the November 2018 ballot that she described as “pertain[ing] to the displacement of families.”  Proposition 10 was aimed at repealing Costa-Hawkins and allowing local governments to impose rent control on rental units constructed after 1995. At the time, Rodriguez (now a staffer for Community Action Program of Orange County) was interning at Chicanos Unidos, a radical-Left non-profit hostile to charter schools, “gentrification,” law enforcement and gang injunctions.

Neither the minutes nor the audio of the November 2018 meeting have been published, so it’s unknown what information on Prop. 10 was presented or if the commissioners took any action. Either way, is this even an appropriate topic for a non-elected body like the Youth Commission? Does the city want it to become a platform for politically-active commissioners to advance their particular agendas?

The picture that emerges from reviewing available minutes is of a lot of programming aimed at the youth commissioners combined with lots of ideas that mostly go nowhere. At the November 2017 meeting, Commissioner Marc Flores, a Moreno appointee, urged de-emphasizing programming and focusing the commission’s energies on urban planning.

For example, Commissioner Marc Flores packed the June 2018 agenda with these items:

None of these and other agenda items were taken up because the meeting was cancelled. The Youth Commission didn’t meet again until October 2018, by which time the energetic Mr. Flores’s term had ended and his items dropped from agenda.

After cancelling its December 2018 and January 2019 meetings, the Youth Commission was able to muster a quorum and meet last week. On the agenda: forming subcommittees and discussing Youth in Government Day. The commission will also get around to approving the minutes of the October 2018 meeting.

Alter or Abolish The Youth Commission?
Tomorrow evening, the Anaheim City Council will be reviewing all city boards and commissions per  the request made by Councilman Moreno on December 18. At the same meeting, Mayor Pro Tem Lucille Kring expressed her desire to focus on the Youth Commission.

The idea of a Youth Commission is appealing, and the commissioners themselves doubtlessly sincerely motivated by a desire to serve. But its execution leaves much to be desired. It’s official purpose is to advise “the City Council on the needs, assessments, priorities and interests of the children and youth of Anaheim.” That’s a broad mandate, and it’s questionable whether it is even capable of adequately or accurately fulfilling it. After 18 months, it’s difficult to point to a significant accomplishment or example of the commission advising the council on any issue.

Obviously, each youth commissioner derives value from their membership: the opportunity to participate and learn about local government and gain civic experience. Plus, it looks good on a college application or resume.

At the same time, it’s hard to justify the staff time and resources being put into a body that cancels half its meetings and hasn’t demonstrated much capacity to advise the city council meaningfully – or it all. While some commissioners seem to view it as a vehicle for political action, is that really its purpose?

A strong case can be made for chalking it up as a unsuccessful experiment and allowing it to expire at the end of this term. Or at the very least re-structure it, starting with eliminating the 22-26 year old category. When one is in that age range, one is an adult – not a youth. To the extent it is even wise to seek public policy input from adolescents, is it really a “Youth” Commission when you lump 14 year olds in with 26 year olds? Not only will the former tend to defer to the latter in commission dynamics, but a kid who is two years away from a drivers license sees the world very differently than a working adult paying off college loans.

The council might also look at setting stricter boundaries regarding the Youth Commission’s purview to prevent woke commissioners from pulling it off the rails.

Regardless, one cannot credibly judge Anaheim’s experiment with a Youth Commission to be a success.