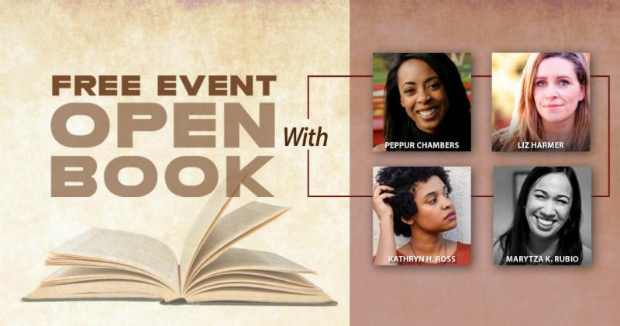 Peppur Chambers is an international writer/actor/director who strives to live her voice and inspires others to do the same. A graduate of Marquette University’s College of Journalism (BA Advertising/Marketing), Peppur taught journalism at Prague College and has contributed to Circle+Bloom, Prague Pulse Magazine, Bridge/Gate Magazines, Boned, Prague Literary Microfestival, Humor Mill Magazine, LA Beat, and The Firm FM radio show where she did a weekly, relationship-advice segment, “Keep It Spicy”. She’s also a freelance Social Media and Marketing Content creator for small businesses through her company Pen & Peppur, LLC.

Liz Harmer is a Canadian living in California. She’s received many honors for her essays and stories, including being shortlisted for the Flannery O’Connor Short Fiction Award, anthologized in The Best Canadian Stories, a finalist for the Journey Prize, and a winner of a National Magazine Award. The Amateurs is her first novel.

Kathryn H. Ross is a writer, reader, and storyteller from Southern California. Her short stories, essays, and poems focus on everything from God, faith, and spirituality, to memory and sense of being, human connections and relationships, and the dichotomy between blackness and otherness in America. Her manuscript, On the Brown Body and the Mean World, is a collection of essays exploring the personal, spiritual, and historical trauma that comes with being a young black woman in America.

Marytza K. Rubio is a writer from Santa Ana. Her work has been featured in Los Angeles Times, Slice Magazine, and The Normal School; as well as anthologies Choose Wisely and Exigencies. Marytza holds an MFA in creative writing and is the founder of Makara Center for the Arts, a nonprofit library & art center in her hometown. For her work with Makara, she was named one of Orange County’s 100 Most Influential People of 2018 by the OC Register.

This is a free presentation at the Muzeo Museum and Cultural Center Carnegie Building. RSVP to Carol Latham: clatham@muzeo.org