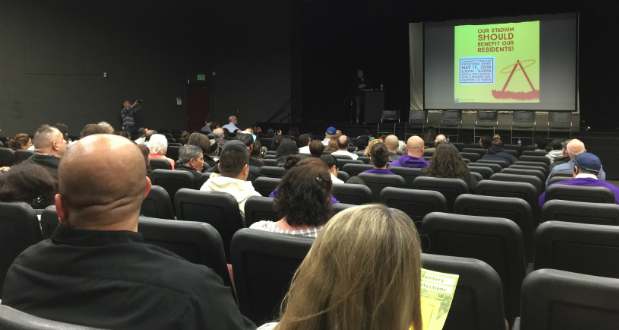 OCCORD livecast the rally. You can watch it here and here.

In reality, it was a campaign rally where attendees were fed a diet of misinformation and falsehoods – as simple fact checking makes clear, starting with the invitation flyer organizers dropped on District 5 door steps.

OCCORD Falsehood: The City Council Wants to Continue The Existing Lease
In an invitational flyer its lit-dropped on door steps in District 5, OCCORD claims the City Council is considering a renewal the current lease agreement – which is false. 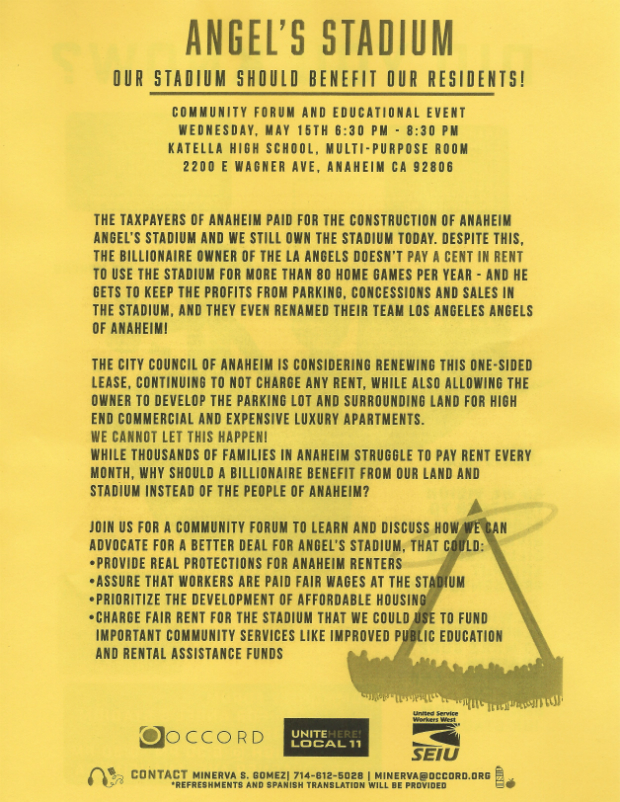 Earlier this year, the city council approved a 14-month lease extension to keep the Angels in Anaheim through the 2020 season, while both sides try to negotiate a permanent agreement. Contrary to OCCORD’s claims, no one is talking about simply renewing the current lease. That is plainly false.

If fact, one of the few things anyone can say with any certainty about Angel Stadium negotiations is that no one is interested in continuing the existing lease.

OCCORD Falsehood: Angels Don’t Pay Rent
This is a central message not only of the rally, but the coalition of special interests lobbying for their piece of the pie from any stadium deal.

The aforementioned flyer claims the city council is looking at “continuing not to charge rent” to the Angels.

The problem is Hausermann and Gomez – and OCCORD, UNITE-HERE Local 11 and SEIU – are lying to the public.

The current lease agreement between the city and the team was made in 1996. Under its terms, the Angels could either make twice-yearly rent payments or pre-pay the rent in the form of $80 million in stadium improvements . The Angels did the latter (under the agreement, the city contributed $30 million to the stadium renovation).

In fact, the team has spent $87 million on the stadium renovation between 1996 and 1998; the extra $7 million does not count against rent.

In other words, over the 33-year term of the agreement, that comes out to two-and-a-half million a year in rent.

Furthermore, the Angels have spent another $25 million on stadium upgrades since 2003.

Think of it this way: if a tenant spent $20,000 on improvements to his or her apartment under an agreement with the landlord that it would be credited against their rent – does that mean the tenant was getting free rent? Of course not. But that’s what OCCORD and its confederates would have us believe. 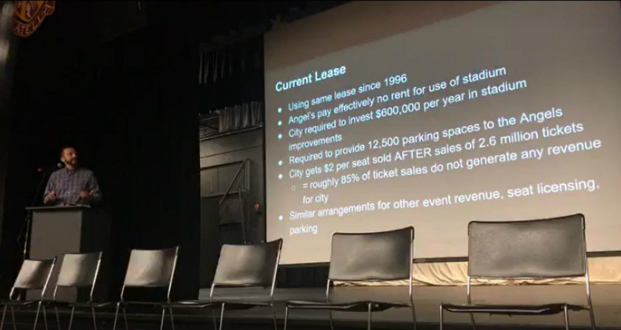 Hausermann knows the Angels have pre-paid $80 million in rent. It’s public information. After all, he made sure to mention the city’s $30 million share of the stadium renovation price tag:

And yet, he deliberately withheld the Angels’ $80 million share of the renovation from the audience. In fact, throughout his presentation, Hausermann misled the audience by omitting virtually all Angel spending on the stadium from his presentation. Anyone hoping to get a complete, thorough, balanced informational briefing on the Angel Stadium lease was not getting it from Mr. Hausermann.

The bottom line is Hausermann knows it is false to says the Angels pay no rent. And yet he said it anyway – not only him, but the coalition of which he is a part.

OCCORD Falsehood: City Spends More On Stadium Than Angels
Hausermann made this claim:

“The reality is we, the taxpayers of Anaheim have spent more on the stadium than the Angels themselves.”

Hausermann manufactured this claim by comparing total expenditures by both parties between 2008 and 2017: $19 million from the city and nearly $13 million by the Angels. Using that arbitrary time frame allowed him to exclude the $113 million that Angels had spent on the Stadium between 1996 and 2003.

OCCORD Falsehood: The City Is Using The 2013 Negotiation Framework
Hausermann also misled attendees into thinking the city was using the 2013 negotiation framework as the basis for upcoming negotiations with the Angels.

His “evidence”? An e-mail exchange between Tom Morton, executive director of Convention, Sports & Entertainment and new City Manager Chris Zapata. Judging from the portion of the e-mail that Hausermann cropped for his PowerPoint slide, Morton sent Zapata an e-mail briefing him on what was contained the 2013 framework. As the city prepared to resume negotiations with the Angels, it makes sense for the newly-appointed city manager to educate himself on the history of past negotiations with the team.

Instead, Hausermann tries to gin up the audience by spinning this e-mail exchange into a sinister attempt to secretly revive the 2013 negotiation framework, which – whatever one thinks of it – is deader than a doornail.

“It’s a new day and we go into discussions about the stadium with a fresh start. Nothing is predetermined except an agreement that is good for our residents and that works for the team,” said Lyster.

“We are not looking to revisit the framework of 2013,” Lyster continued. “That was more than six years ago now, and we have moved on. Any suggestion otherwise is misinformed and incorrect.”

Again – why do Hausermann and OCCORD prefer to mislead the public rather than provide a full and balanced presentation of the facts?

And this is by no means a complete fact checking of OCCORD’s presentation.

OCCORD, UNITE-HERE Local 11, SIEU and their political allies don’t care about getting a “fair deal.”  Theirs is a special interest play to ensure they get a slice of the pie if the city and the Angels are able to hammer out an agreement – while simultaneously creating issues for their endorsed council candidates to run on in 2020.