Posted by: Matthew Cunningham in Anaheim Resort, Business and Tourism, Disneyland Resort May 29, 2019 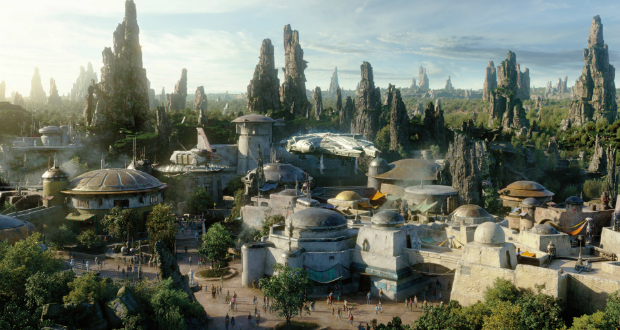 It’s fair to say the Friday opening of Star Wars: Galaxy’s Edge will be the single biggest event in Disneyland history since Walt Disney opened the park on July 17, 1955.

Disney has invested $1 billion in the 14-acre expansion land – the largest single park expansion in Disneyland’s history. “Galaxy’s Edge” has been lovingly and intensely crafted by Imagineers to be a uniquely immersive experience set in Black Spire Outpost village on the planet of Batuu, at the edge of the galaxy in the Star Wars Universe. The Star Wars franchise has 42 years of history behind it and tens of millions of fans spanning generations.

Guests will be able to experience the iconic Millennium Falcon as an immersive attraction. Millennium Falcon: Smuggler’s Run is a six-passenger motion simulator with a domed video screen, in which passengers ride in cockpits that rotate like a revolver chamber. 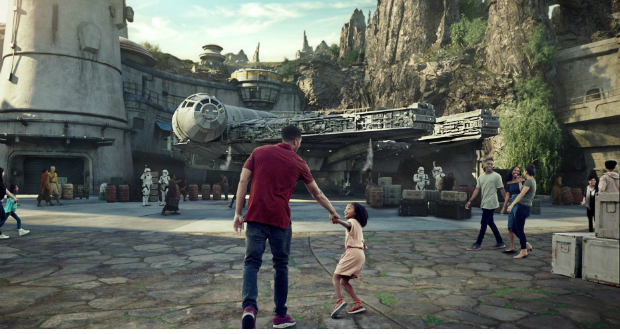 Visitors can hoist drinks at the fabled cantina – and this wretched hive hive of scum and villainy will be the only location in Disneyland open to the general public where alcoholic beverages will be served.

Even the role of cast members is being kicked up a notch. Disneyland is going beyond its customary emphasis on a friendly and helpful guest-oriented attitude, by extending the immersive nature of the new land to how cast members behave and interact with guests. In a sense, they’ll genuinely be cast members in a performance – auditioning for specific roles in Galaxy’s Edge, such as stormtroopers for the First Order.

In order to manage the surging influx of guests, Galaxy’s Edge will be accessible on a reservations-only basis for the “soft opening” period from May 31 through June 23 – and they’ll be limited to four hours in the land. Guests staying at the three Disney hotel properties – the Disneyland Hotel, the Grand Californian and Paradise Pier – automatically get Galaxy’s Edge reservations. However, rooms for the opening weekend sold out long ago, and are scarce for the next several weeks.

On May 2, Disneyland made “soft opening” reservations not already allocated to Disney hotel guests available to the general public. They were gone in less than two hours. According to the OC Register:

“They did 24 days of reservations and it’s unlikely it’s less than 10,000 people per day, so that’s 240,000 right there as an absolute minimum. It’s probably around 300,000,” said Len Testa, president of Touring Plans, an online subscription service that lets users create custom theme park itineraries.

The City of Anaheim is preparing for the onslaught by double the number of traffic control personnel in the Resort Area from 10 to 20 people. The 50 cameras on Resort streets and intersections (and the other 100 in the rest of the city) will be monitored 24 hours a day in the optimize traffic flow by adjusting signal timing as necessary.

“When Disney California Adventure was revamped and introduced Cars Land, the market saw a sizable demand increase across the board. Star Wars is a larger expansion than that and frankly, has a much more loyal following because they’ve been around longer. We think there is going to be a pretty sizable impact on the market in a positive way and very excited for [Galaxy’s Edge] to open.”