Is it appropriate for school superintendent to publicly associate himself and the district he runs with partisan politics?

It doesn’t appear that question crossed the mind of Anaheim Union High School District Superintendent Michael Matsuda, who was the headline speaker at the June 1 meeting of the Anaheim Democratic Club: 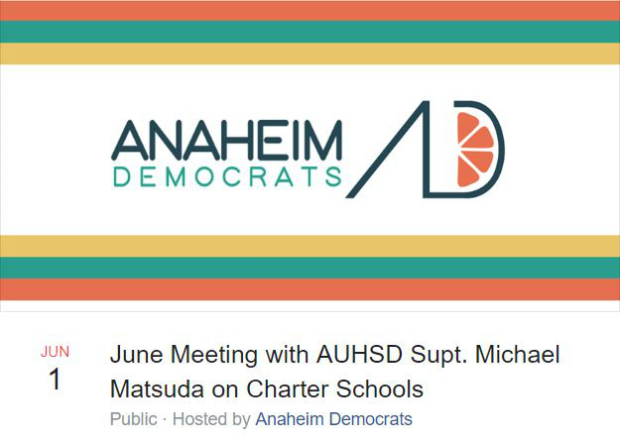 School superintendents generally steer clear of partisan politics, and are careful not to publicly associate their office and their district with political parties.

But this is Mike Matsuda’s Anaheim Union High School District – where the line between governance and partisan politics has been obliterated with the connivance of his school board members, particularly Al Jabbar.

The professed purpose of the Anaheim Democratic Club is to elect Democratic candidates in Anaheim. [Editor’s Note: the John Armstrong RSVPing below is Councilmember Denise Barnes’ appointee to the Anaheim Planning Commission.] 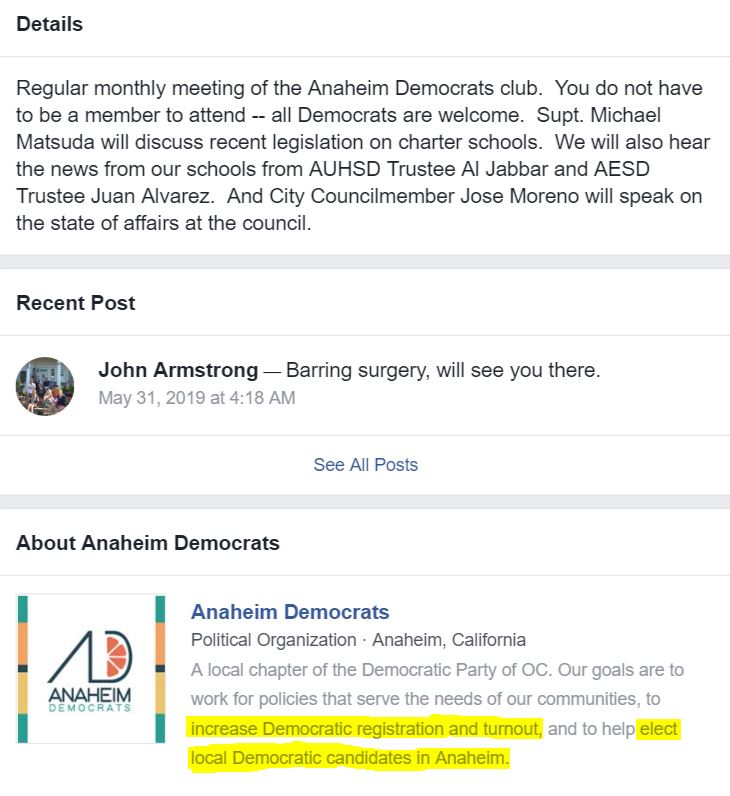 That mission includes the Boards of Education of the AUHSD and the Anaheim Elementary School District. The AESD trustee who also spoke at the June 1 meeting, Juan Alvarez, is a teachers’ union officer who works for Matsuda at the AUHSD. Indeed, four of the five members of the AESD Board of Education are AUHSD employees – meaning Matsuda is their boss. 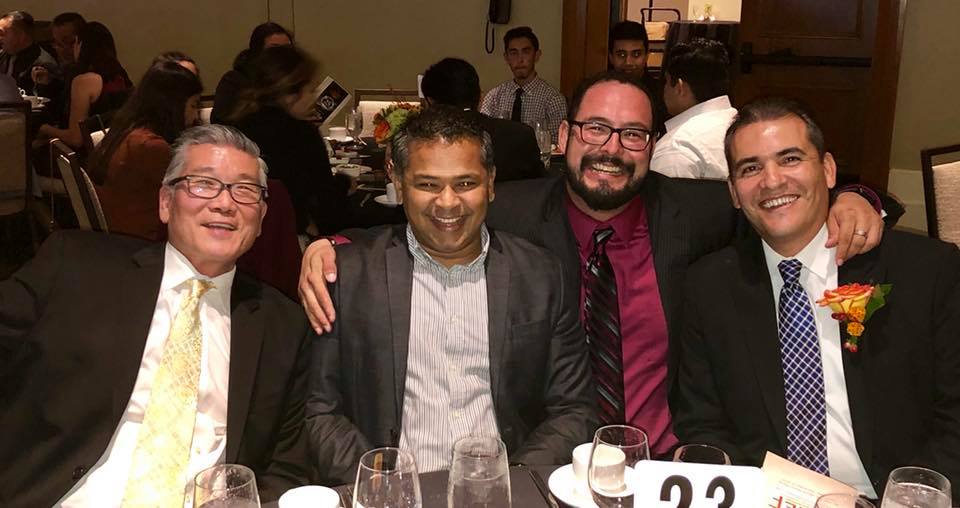 Matsuda’s progressive political views are strongly held, especially on charter schools – which he adamantly opposes. In fact, he has turned the AUHSD into a hotbed of anti-charter school political activity.

But he’s not an elected official and his decision to address the Anaheim Democrats Club once again calls into question whether grasps – or even cares about – the non-partisan nature of his appointed office.

Given that people like having choices and parents want what is best for their kids, most people generally do not like the idea of school bureaucrats trying to limit their choices. That’s especially the case when those anti-choice activities are motivated by ideological peccadilloes and bureaucratic empire protection.

Imagine a city manager speaking at a Democratic or Republican party organization – and particularly about a hotly political issues dividing those two parties? They don’t because it undermines public confidence that city government is being administered in a non-partisan fashion.

According to the most recent California Assessment of Student Progress and Performance (CAASPP) scores, 56% of AUHSD students were below standard in “English language arts/literacy needed for likely success” in future course work. For mathematics, more than 76% of AUHSD students failed the meet the achievement standard for “the  knowledge and skills in mathematics needed” to succeed in entry-level college coursework.

Little wonder hundreds of families try to transfer their children out of the AUHSD.

Instead of entangling his office and the district in partisan politicking and working to limit families educational, perhaps Superintendent Matsuda should focus on provide more AUSHD students with a higher quality education. 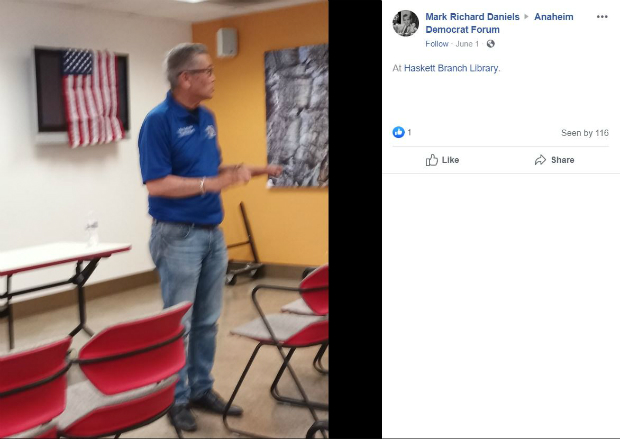 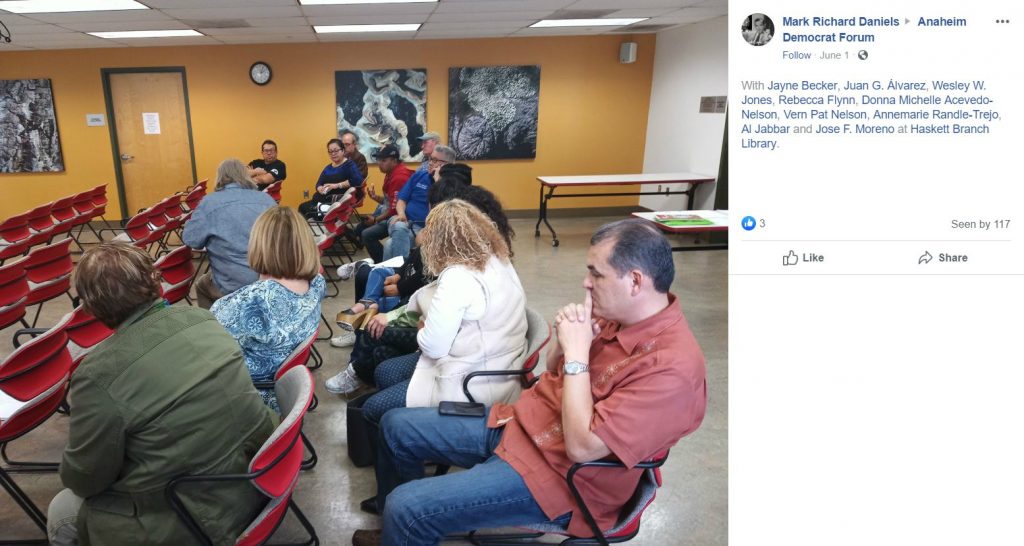 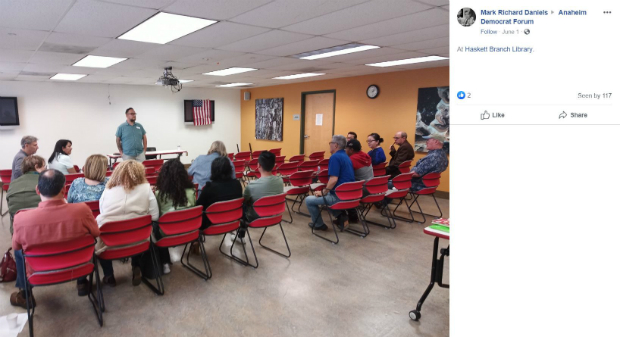