The fervor of the Anaheim progressive political claque’s freak-out over Assemblyman Tom Daly’s vote an a teacher union bill is testament to the almost religious intensity of their opposition to charter schools.

Ryan Ruelas – a teachers union officer and member of the Anaheim Elementary School District Board of Education – called Daly a “supposed” Democrat: 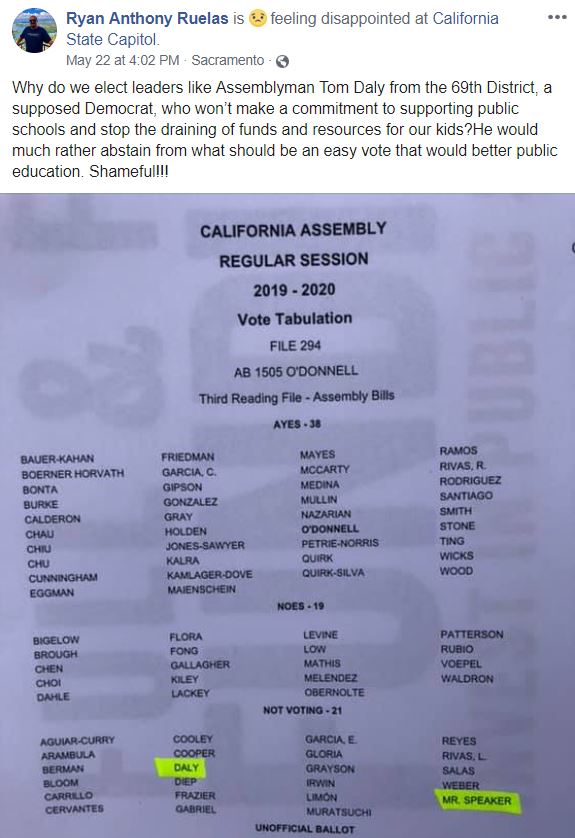 In Ruelas’ mind, one cannot be a “real” Democrat unless one marches in lock-stop with progressive-teachers union orthodoxy. 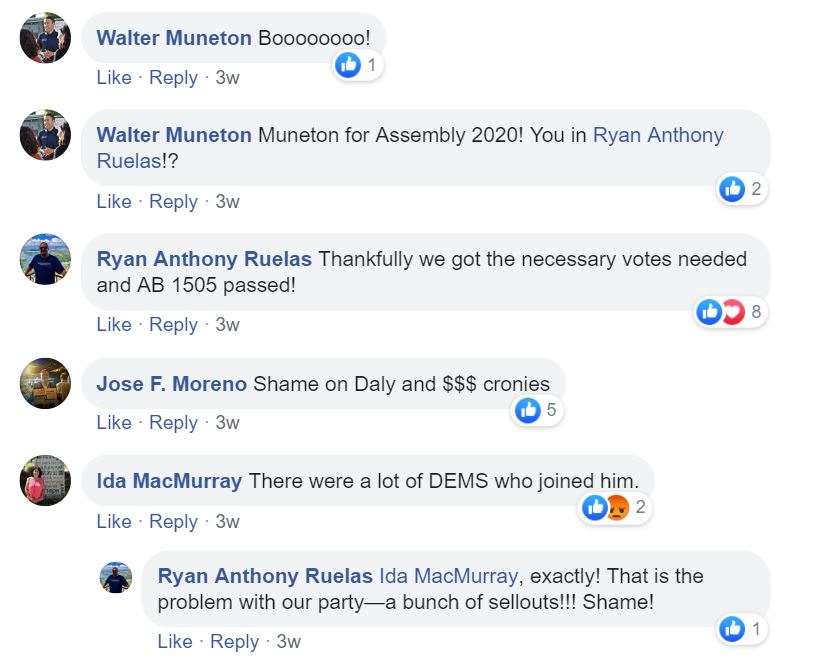 Magcalas is a member of the AESD Board of Education who works for the AUHSD, teaching Ethnic Studies at Loara High School. He believes U.S. History as normally taught in high schools is “Eurocentric” and “oppressive.”

Moreno, predictably, blames “$$$ cronies.” It’s apparently inconceivable to him and his like-minded educrats that someone might support charter schools because a) parents and students like them b) they generally do a better job than traditional public schools in educating disadvantaged students and c) because people ought to have educational choices.

Blaming “$$$ cronies” is particularly absurd because it is Moreno’s public school union allies who are the true $$$ crony-makers – dominating public education by spending enormous sums to elect their cronies to school boards and the state legislature.

Moreno’s consigliere, Al Jabbar, is a member of the Anaheim Union High School Board of Education., He shared Ruelas’ outburst and added his two cents of outrage: 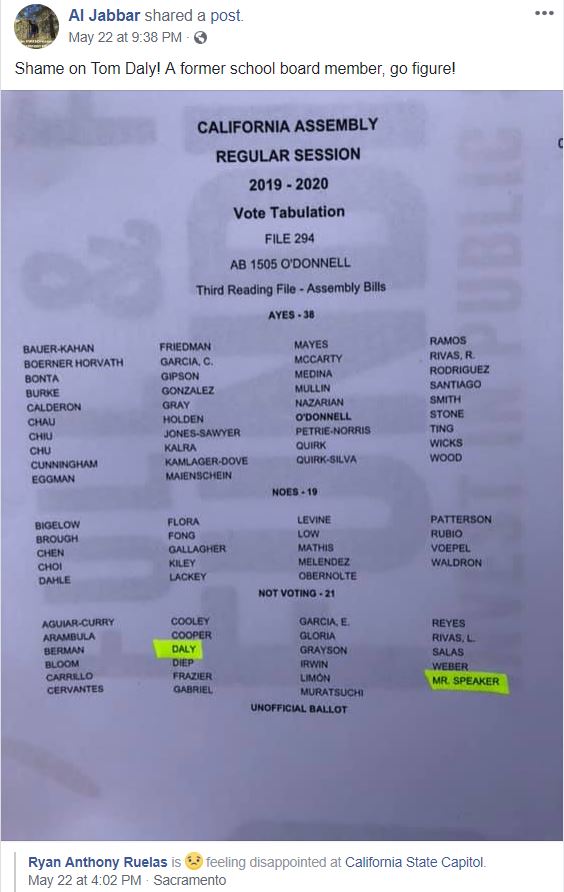 There’s talk in political circles that Jabbar may mount a primary challenge against Daly. Jabbar was re-elected to another term in the AUHSD Board of Education last year, and so a run against Daly in 2020 would be a “free ride.”

Assemblywoman Sharon Quirk-Silva chimed in to warn the progressive faithful that they would need to re-educate her colleagues with children who – gasp! – do not realize that charter schools “are bad.” 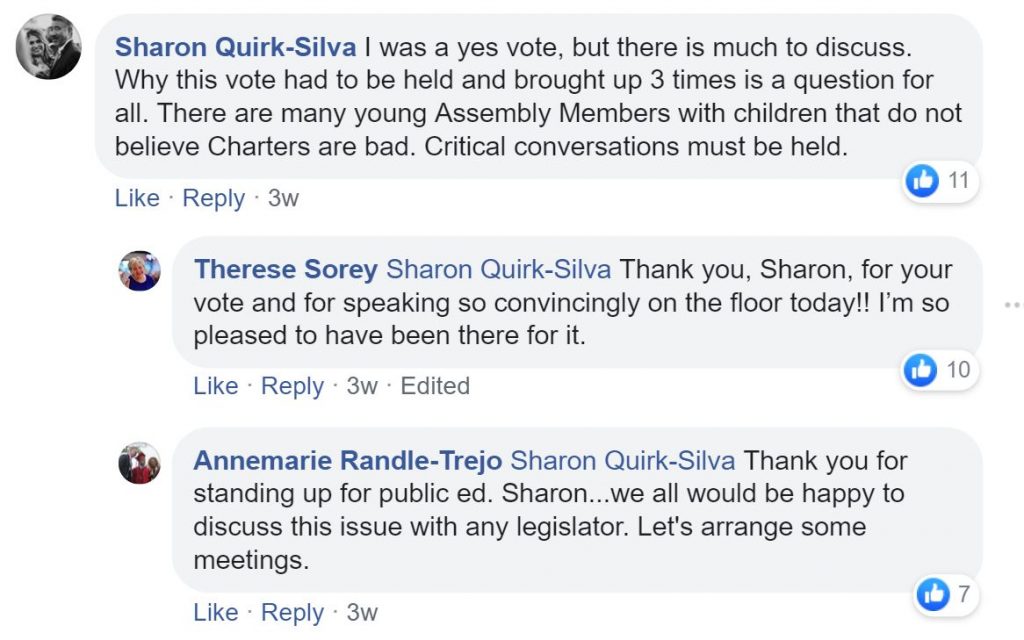 Also, it doesn’t occur to Quirk-Silva that perhaps because they have children, those legislators’ are more concerned that children have educational choices not dictated by their ZIP code or socioeconomic status, than they are afraid of teacher union retaliation.

A local Democrat named Jiselle Neel dissented from the party line with an expression of support for charter schools and called out Ruelas and others conflating union interests with the public interest:

This prompted Ruelas to come down on her with the classic just-shut-up-you’re-not-a-public-school-teacher: 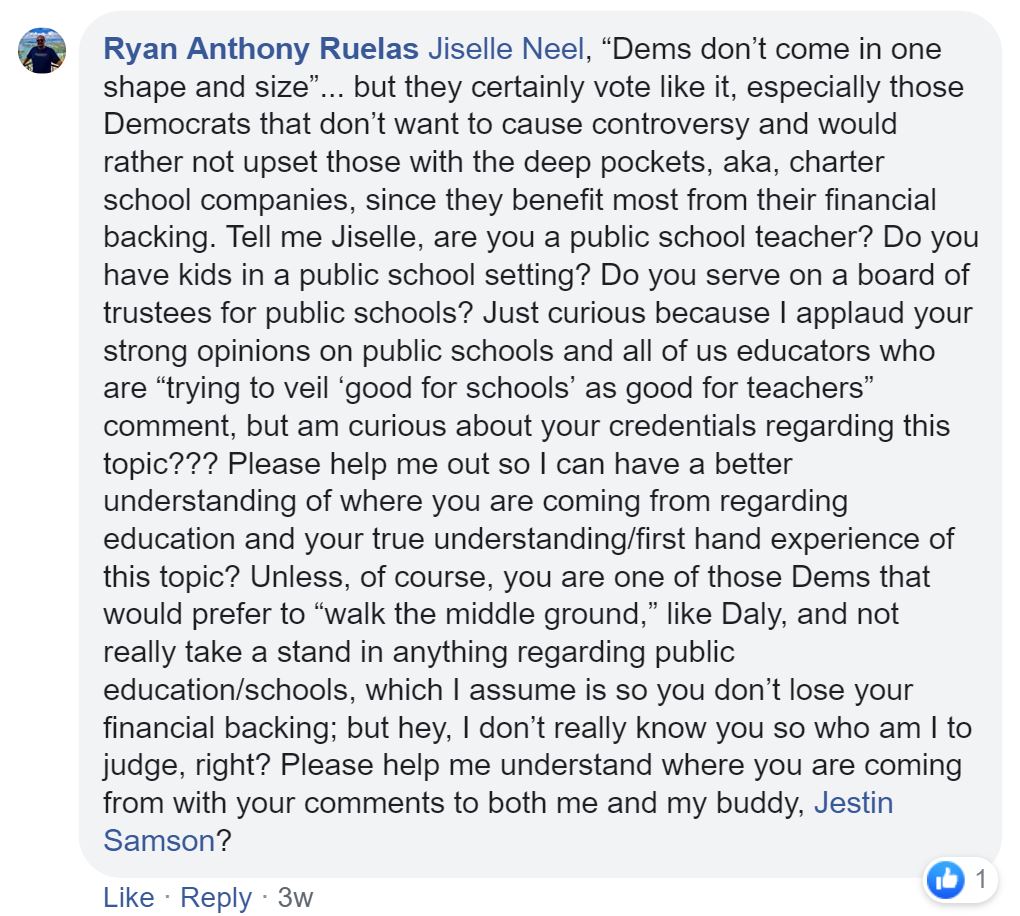 This is a classic teachers union bullying tactic: only public school teachers or school board members or similarly situated people are allowed to have opinions about public education – especially if those opinions are at variance with progressive or teachers union orthodoxy.

Teachers union activists like Ruelas are happy to take tax dollars and votes from people who don’t have kids in in public schools or don’t work in public education – but God forbid those folks should offer an opinion at variance with the public education establishment. They want the public’s money and votes – and silence.

Ruelas’ attitude isn’t surprising: as an AESD Trustee, he voted to spend a million tax dollars suing a parents group to stop them from converting their kids school to charter status.

One of AB 1505’s provision is eliminating a charter school applicant’s right to appeal a local school district’s denial to the county or state boards of education.  Given the deep-seated hostility radiating from Anaheim school board members like Ruelas, Jabbar, Randle-Trejo and Magcalas, does anyone believe they would give a charter school applicant the fair hearing to which they are legally entitled? Of course, not. The AESD and AUHSD school boards are completely controlled by progressive teachers union activists. Any charter application would be dead on arrival, and AB 1505 would deprive applicants the right to appeal pernicious and biased rejection of their applications.

Progressive-at-large Jestin Samson jumps into the discussion to play the “you’re a racist” card against Neel:

Again, note Samson’s apparently sincere belief that since he is a person of color, any negative characterization of his behavior if inherently “racist.” Another classic social justice warrior conversation-stopper.

Remember the genesis of all this progressive outrage against Assemblyman Daly is because he didn’t actively support a bill whose goal is to reduce education choices and options for parents and children. Daly is a traditional left-of-center Democrat of the kind that don’t see the harm in allowing innovation and choice in public education – who can see the benefit not allowing the educational destiny of disadvantaged children to be determined by their ZIP code.

In today’s California Democratic Party, putting the interest of parents and kids ahead of powerful government interest groups is considered being a “sellout” who is “against public education.”