Moreno Blames Capitalism For What Ails Us 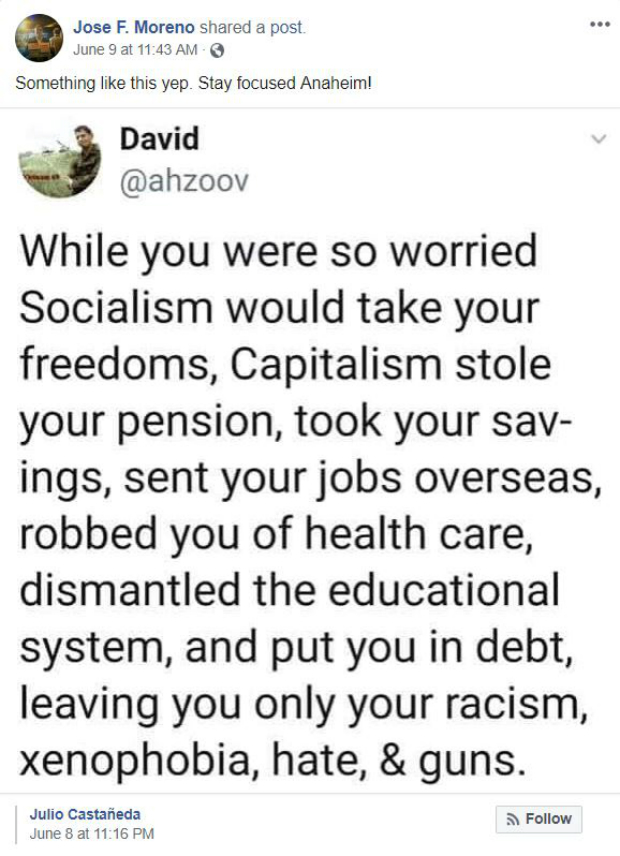 One of the constants of human history is smart people believing foolish things. There’s a lot of it going around nowadays and Moreno’s re-post of this nonsense about capitalism is a case in point.

It’s capitalism that funds our pensions.

It’s capitalism that endlessly opens new opportunities for the freedom to create, invent and innovate.

It’s capitalism that has spurred the creation of tens of millions of good paying jobs and continually enlarges our middle class.

Capitalism doesn’t put people in debt (we do that to ourselves) but it does generate countless opportunities to work and earn one’s way out of debt.

Capitalism is the antidote to xenophobia and racism. It respects and is drawn to ability and hard work and talent – and it has provided pathways of opportunity for tens of millions of immigrants and minorities to advance and rise in spite of bigotry.

Capitalism didn’t give us hate. Hate is as old as mankind. It goes back to Cain and Abel.

Democratic capitalism is morally good system – it is far more in tune with human nature than socialism. That why capitalism works – and raises hundreds of millions of human beings out of poverty – while socialism fails and pushed people into poverty and misery.

It’s reminiscent of this sentiment Councilman Moreno expressed a few months ago:

No. Rich people do not create poverty. That is absolute nonsense.

Moreno forgets that poverty existed before there were any rich people. Poverty is our natural state. It is human ingenuity, work, talent, cooperation, liberty and the rule of law — the essential elements of capitalism – that create wealth and opportunity and lift us out of poverty.

There is a lot of nonsense floating around the political world these days. But the above screed takes the cake – and Councilman Jose F. Moreno agrees with it. Keep that in mind next time he offers policy solutions to anything related to economics, money or human behavior.