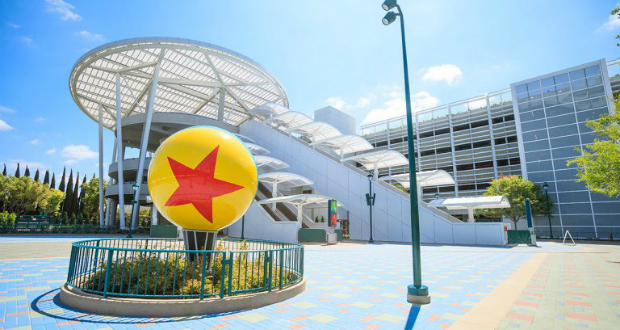 The Disneyland Resort opened its new, 6,500 space Pixar Pals parking structure on June 30 – three months ahead of schedule and just in time as opening of Star Wars:Galaxy’s Edge draws record numbers of visitors to the park.

Disney announced plans for the $100 million structure in October 2017, as part of its ambitious, $1.5 billion investment in expanding the Disneyland Resort.

The  Pixar Pals structure is adjacent to the 10,000-space Mickey & Friends parking structure. The two structures will be connected by the Magic Way Pedestrian Bridge set to open in September.

According to Disney, “This new bridge will connect visitors from Pixar Pals—over Magic Way—to the rest of the resort, allowing guests the option to stroll through the Downtown Disney District to the theme parks’ Main Entrance. By eliminating the foot traffic crossing the street at Disneyland Drive and Magic Way, the new bridge provides convenience, enhances safety, and improves traffic circulation.”

The extra toll lanes and parking spaces afforded by both parking structures are expected to improve throughput by 80 percent and capacity by 50 percent, according to Disney officials. The improvements will add 16 parking toll lanes, 33 security bag check lanes and electronic parking sensors in both structures.