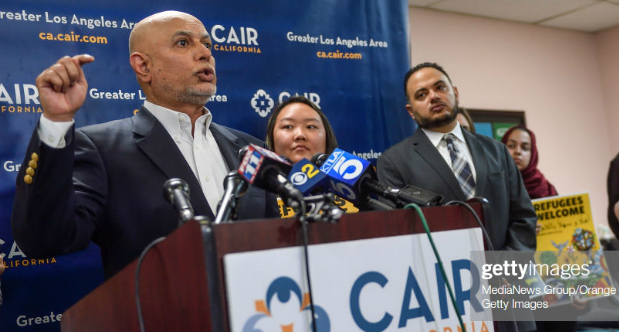 `”We know that the lonely Native American female warrior as the statue of freedom atop the Capitol Dome was cast in bronze by a foundry that used enslaved labor. No different is lady “liberty” (in New York), which was also erected by the enslaved.

And, the White House could not be standing shining all these years if not for the sweat of the enslaved blacks.

Without forgetting this sordid past, let’s fast forward.”

That is how Shakeel Syed began his 4th of July op-ed – weirdly titled “Independence – From What & From Whom?” — published in the Voice of OC last week. From that point, the op-ed is pretty much a standard left-wing political screed.

Syed is the executive director of Orange County Communities Organized for Responsible Development (OCCORD), a left-wing political advocacy group based in Garden Grove and active in Anaheim and Santa Ana politics.

Syed’s op-ed is illustrative of the warped perception of American history that is endemic among the radical Left. He even puts scare quotes around the word free – While the “free” America continues to insist for a safer world for herself, at any cost… — as if our liberty is illusory.

Although ostensibly about Independence Day, Syed’s op-ed makes no mention of the Declaration of Independence nor the principles on which is it based – nor does it reflect on why the colonies fought and suffered for independence.

That’s unsurprising: the modern progressive ideology to which Syed adheres reduces American history to a chronicle of racism, injustice and oppression. According to their multiculturalist ideology, America remains a haven of white patriarchy that is hopelessly shot-through with every species of bigotry. According to that world view, America’s founding was rotten and its history is one of injustice and death. That’s why the progressive-Left always talks about “transforming” America. Hence, Syed chooses to make the 4th of July about slavery rather than liberty and independence.

Even then, Syed gets his facts wrong.

He claims the Statue of Liberty was “erected by the enslaved.” The statue was made in France more than 40 years after that country permanently abolished slavery. It was erected on Liberty Island on 1886 – more than two decades after the abolition of slavery in the United States. Indeed, the Statue of Liberty was originally intended as a celebration of the abolition of slavery.

Syed relates the provenance of the Statue of Freedom as a dour fable of oppression, while erroneously claiming the statue is of a Native American woman (it’s not).  The real story is a more interesting and educational one that illustrates the paradox of an antebellum Republic founded on the principle that all men are created equal while simultaneously allowing millions people to be owned as property.

Prominent sculptor Clark Mills was commissioned to cast the Statue of Liberty from the molds that had been shipped from Rome, Italy. The Italian artisan hired for the complicated task of separating the giant statue mold into its constituent parts had quit over a wage dispute with Mills.

Philip Reid, an artisan and master craftsman – and a slave owned by Mills – figured out a way to separate the sections for transport to the foundry, employing a pulley and tackle to reveal the joints between the sections.  According to government records, Reid was the only slave employed in the casting the Statue of Freedom.

The irony of an enslaved craftsman who solved the problem of transporting the Statue of Freedom for casting vividly illustrates the peculiar in the term “the Peculiar Institution.” Slavery was an evil, and here was a slave playing a critical role in creating a monument to the freedom the Declaration promised, and yet was unjustly denied to him and millions of others.

Two years later, Reid gained his freedom after President Abraham Lincoln signed a law abolishing slavery in the District of Columbia. Reid started his own business, working as a plasterer.

Meanwhile, the country was locked in a bloody Civil War testing – as Lincoln put it in his Gettysburg Address – “whether any nation so dedicated and so conceived” to the proposition that all men are created equal – “can long endure.”

It did, and we have. 360,222 Union soldiers died to save the Union and end slavery. More than 650,000 Americans (and would-be Americans) have since died in defense of those same principles.

And America’s real history is much more interesting, elevating and ennobling than Syed’s crabbed, one-dimensional, angry version of “America the Ugly.”

It’s too bad Syed, like so many other denizens of the radical Left, is so fixated on America’s flaws – in which we are by no means alone among nations – while ignoring the beauty of our founding principles, our accomplishments as a people, our astounding success as a nation of liberty and opportunity and generosity.

What other nation has fought so long and at such a cost to redeem what Martin Luther King called “the promissory note to which every American was to fall heir”?

What other nation has shed so much blood and treasure for the liberation of its own enslaved population, as well as to oppose the enslavement of millions of others beyond our shores?

The inscription on the Korean War Veterans Memorial eloquently captures that spirit: “Our nation honors her sons and daughters who answered the call to defend a country they never knew and a people they never met.”

As Lincoln told the practitioners of identity politics of his time:

‘[The Founding Fathers] meant to set up a standard maxim for free society which should be familiar to all,—constantly looked to, constantly labored for, and even, though never perfectly attained, constantly approximated, and thereby constantly spreading and deepening its influence, and augmenting the happiness and value of life to all people, of all colors, everywhere.”

It’s worth considering the ideology underpinning Syed’s unhappy screed because it is the ideology of the network of progressive political organizations and activists seeking to increase their political influence over city councils and school districts in Orange County.