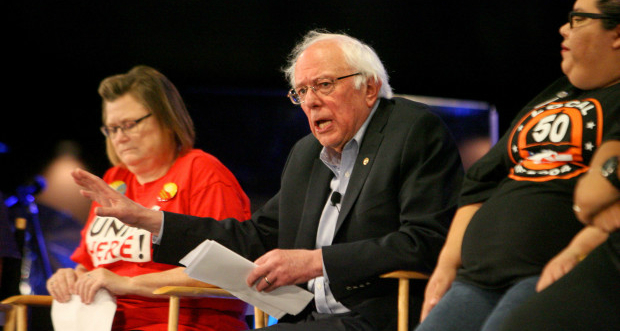 The controversy stemming from Bernie Sanders’ labor dispute with the union representing his campaign field organizers had laid bare the hypocrisy of his attacks on business, especially his fixation on Disney.

A centerpiece of Sanders presidential campaign has been his call for more than doubling the federal minimum wage – from $7.25 to $15 an hour.

“There’s nothing “extreme” about raising the minimum wage to $15 an hour,” Sanders tweeted on July 18.

Except, it turns out a $15 minimum wage is too extreme for Sanders to pay his campaign field organizers.

The Sanders campaign is unionized, and his field workers are represented by United Food and Commercial Workers Local 400. Their contract stipulates a minimum wage of $15, yet as the Washington Post reports, “field organizers were working 60 hours per week at minimum, dropping their average hourly pay to less than $13.”

Remember, Sanders considers paying workers less than $15 an hour the equivalent of “starvation wages.” Even interns at Sanders campaign HQ  are making $20 an hour.

His campaign staffers seem to agree. They took to Slacker to share their financial woes, the Post reported:

“I am struggling financially to do my job, and in my state, we’ve already had 4 people quit in the past 4 weeks because of financial struggles,” wrote one field organizer. Another employee said his co-workers “shouldn’t have to get payday loans to sustain themselves.”

A third said he supported the demands for higher wages “because I need to be able to feed myself.”

Sound familiar? It’s identical to a campaign waged in 2018 by a Resort union coalition led by UNITE-HERE Local 11, seeking to villainize Disneyland in the midst of contract negotiations. They rolled out activist members and shop stewards to claiming their members were unable to live on what they made as Disneyland cast members.

Drawn to this public display of worker angst like a moth to flame, Sanders flew to Anaheim in July 2018 to exploit the media attention garnered by the Resort unions. As the OC Register reported:

“I want to hear the moral defense of a company that makes $9 billion in profits, $400 million for their CEOs and have a 30-year worker going hungry. Tell me how that is right,” Sanders thundered at an Anaheim church last July in front of an audience of union members.

Sanders’ campaign is raising money hand-over-fist, banking $24 million in the second quarter of this year and reporting $30 million cash-on-hand. How does Sanders justify working conditions that drive his employees into food insecurity and push them to payday loans?

While Sanders was happy to help the Resort unions publicly blast Disney, he lashes out at his own his employees for publicly airing their grievances:

“It does bother me that people are going outside of the process and going to the media. That is really not acceptable. It is really not what labor negotiations are about, and it’s improper.”

Throughout this drama, Sanders has – without shame or embarrassment – continued to slam companies like McDonald’s and Disney, claiming they don’t pay their employees enough.

The average wage of Disney cast members is nearly $20 an hour. A non-union seasonal cast member fresh out of high school starts out at $15 an hour. Under Iger, it launched launched the Aspire program: Disneyland cast members can pursue a college degree, specialized education, a GED or other educational goal, and Disney pays for their tuition, books and associated costs – with no obligation to stay with the company.

This year, the company announced a $10 million child care program for eligible Disneyland Resort cast members. Disney contributes generously to the community, including a $5 million donation this year to a fund to develop low-income housing in Anaheim.

Sanders believe his campaign has hit upon a solution: cut hours for campaign staff in order to “raise” their pay to $15. Huh? Since when does not raising worker wages constitute a pay increase? Wouldn’t generous overtime time be the democratic socialist thing to do? Sanders wants to force every other employer in the nation to actually pay a $15 minimum wage but its OK for him to pay his staff less than that? Is that a feature of socialist economics?

That is a huge gain for the tens of millions of ordinary Americans who’s more than just “profits.”  Every pension fund, mutual fund, retirement account that’s tied to the S&P 500 – that is to say, every Americans retirement – is affected by the success or failure of Disney’s corporate leadership.  Iger’s success in as Disney CEO has had a direct and positive material effect on the fortunes of millions of ordinary Americans.

Sanders chisels his staff while lambasting companies that are actually creating jobs, wealth, opportunity and upward mobility for millions.  Sanders’ isn’t the first tribune of the working class to be caught out as a hypocrite, but rarely has the hypocrisy been this stark and public.