Mayor Harry Sidhu: Our Approach To Stadium Negotiations With The Angels

[This op-ed originally appeared in the OC Register on August 22, 2019]

We have a once-in-a-generation chance to build on the legacy of baseball in Anaheim.

As we set out on talks with the Angels on a new stadium lease, we can forge a better deal for our residents while also improving what is great about having baseball in Anaheim.

Yet, for some, it’s a chance for fighting, rehashing and putting narrow interests first. That does a disservice to us all.

As mayor I take a bigger view. In the next few weeks, we will sit down with the Angels with a goal of a mutually beneficial agreement that serves our residents and brings benefits for years to come.

Here are my guiding principles:

With 155 acres of land around Angel Stadium of Anaheim, we have an incredible opportunity. The potential sale of all or part of this city land would bring revenue we can use to address community priorities while also providing funding for an improved or new stadium.

As part of the negotiating team, I will insist that any land sales or leases be at market prices, reflecting ongoing baseball use, development we’re likely to see and any requirements we may ask for with the land. You’ll hear some argue for unrealistic prices based on what we might see if we sold all of the land for housing.

Of course, housing is likely to be part of what we see around the stadium, including affordable homes that allow people to live and work in Anaheim.

But to get the most for our community we can’t be so shortsighted. Homes must be part of a larger mix that includes restaurants, shops, offices and hotels, which bring recurring revenue for our city.

That is our vision for the Platinum Triangle, the area around the stadium, and it holds the greatest potential for our residents. 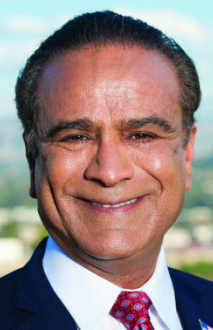 Market Rent for Stadium Use

If we see a new lease for a city-owned stadium, it should include annual rent payments, city revenue-sharing or a combination of both. You’ll hear a lot about rent at Angel Stadium. Unfortunately, much of it is misleading.

Those who don’t want the Angels to stay, or only want a deal on their terms, will tell you the team doesn’t pay rent at the stadium. From 1996 to 1998, the team paid $87 million to fix up Angel Stadium, which then was 30 years old.

That was $87 million our residents did not have to pay to fix up our stadium.

Under the team’s current lease, $80 million of that investment counted as prepaid rent, working out to $2.5 million a year for the 33-year life of the lease. But that’s history now.

Any time we consider a new lease, it is a chance to a take fresh look at rent and revenue, much as we did in 2018 with a new agreement for Honda Center.

Anaheim’s general fund touches residents every day by supporting police, fire, libraries, parks, community centers and services. Any new deal must not detract from what we now spend on our neighborhoods. In fact, it should add to it and help us keep taxes low. By looking at market-driven development to fix or build a stadium, we will protect our general fund from costs seen by other sports cities.

We will look to newly created tax revenue to help us fund neighborhood improvements to parks, community centers, libraries and programs for kids and residents alike.

The land around Angel Stadium is one of our greatest assets. Whether we own land or just have a say in how it’s used, we must ensure we are maximizing value for our residents.

Stadium land must produce ongoing revenue for public safety, parks and community services. That must come from a healthy development mix that generates hotel, sales and property tax revenue that we can use to provide the services our residents expect and deserve.

To be sure, these guiding principles are not exclusive.

There is room for more community benefit, including parks, shops and businesses serving residents and a focus on filling high-wage construction jobs with Anaheim residents and veterans.

For now, we have our work ahead of us. We stand ready to build on a beloved baseball tradition in Anaheim while ensuring lasting benefits for our residents for years to come.

Harry Sidhu is the Mayor of Anaheim.