A staple of Councilman Jose F. Moreno’s Facebook feed are posts celebrating radicals or laser-focused on the darker aspects of American history – to which he often adds the observation “History. Matters.”

On Friday, he posted this: 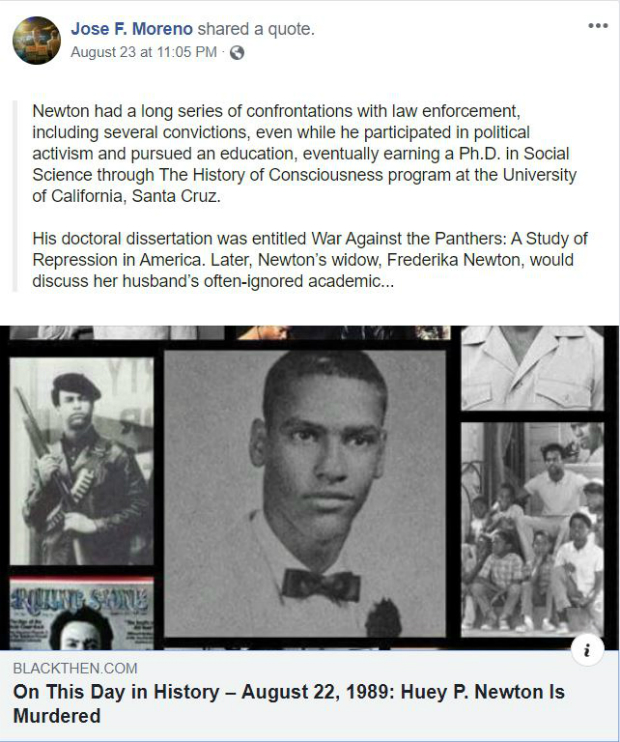 Why is Moreno commemorating Huey Newton, a socialist revolutionary and founder and leader of the Black Panther Party, whose motto was “by any means necessary” – a man the left-wing Guardian newspaper describes himas “a deranged narcissist ever ready to pull the trigger”?

The article re-posted by Moreno describes Newton a “political and urban activist” and its recounting of his “legacy” omits any mention of his political and criminal violence, or support for murderous communist regimes. It’s like a “Lost Cause” approach to Newton and Black Panther Party history.

The post Moreno re-posts leads refers to Newton’s record of “confrontations” with law enforcement – a rather anodyne description of Newton’s years of violent criminal activity.

In 1964, Newton served a six-month prison sentence for repeatedly stabbing a man with a steak knife. In 1967, a routine traffic stop escalated into a shoot-out between Newton and police. Newton was convicted of voluntary manslaughter for fatally shooting Oakland police officer John Frey and sentenced to up to 15 years in prison. The conviction was overturned in 1970 on a technicality and Newton was freed.

In 1974, Newton faced a murder charge for shooting  a 17-year old prostitute named Kathleen Smith in the face, killing her.  The same year, he was charged with assaulting his tailor Preston Callins. Both victims were attacked for calling Newton “baby” a hated childhood nickname.

Newton was able to post the $80,000 bail on the murder charge, and subsequently fled to Communist Cuba. While there, he was visited by Jim Jones, leader of The People’s Temple. In 1978, Newton preached support of Jones via telephone to People’s Temple members at their commune in Guyana. Later that year, 918 Temple members – men, women and children – died in a mass suicide by drinking cyanide-laced Kool-Aid.

Newton returned to the US in 1977 to stand trial for the murder and assault charges. That same year, Newton’s Black Panther confederates attempted to assassinate Crystal Gray – a key witness in the Kathleen Smith murder trial. Gray subsequently refused to testify and the trials resulted in hung juries.  The victim in the assault case, Preston Callins, changed his story, leading to Newton’s acquittal – although he was convicted of illegal fire arms possession.

In 1982, Newton was charged with embezzling $600,000 in state government funds from Oakland Community School, which was operated by the Black Panthers. The charge were later reduced and Newton pled nolo contendre to embezzling a $15,000 state check for his own use.

In 1970, Newton wrote to the Viet Cong, offering the Black Panthers’ assistance. The Communist guerrillas were engaged in active combat with American servicemen, who were in South Vietnam defending that country from conquest by Communist North Vietnam and its Viet Cong allies:

In the spirit of international revolutionary solidarity the Black Panther Party hereby offers to the National Liberation Front and Provisional Revolutionary Government of South Vietnam an undetermined number of troops to assist you in your fight against American imperialism.

In 1971, Newton visited the Communist China ruled by Mao Zedong, praising it as “a free and liberated territory with a socialist government.” As many as 50 million Chinese died under the Great Leap Forward, the Cultural Revolution and other totalitarian schemes implemented by Mao and the Chinese Communist Party.

Moreno and other progressives bemoan gun violence and call for stringent gun control laws. Newton, however, embraced the use of firearms and their employment in community “self-defense” against law enforcement. In fact, it was in response to the Black Panthers habit of openly walking around armed with shotguns and pistols that led to the California legislature outlawing the open-carry of firearms.

Newton’s life ended as he had lived it: violently in criminal activity – murdered in a crack cocaine deal gone bad.

History does matter – which begs the question of why doesn’t Newton’s well-known history of violence and criminality matter to Councilman Moreno? Otherwise, why publicly commemorate a violent thug like Newton?

On the other hand, it’s not unusual for denizens of the progressive Left to romanticize violent radicals. They willing to overlook or rationalize abhorrent and often deadly behavior when committed in the service “fighting injustice” – rationalizing such acts as regrettable excesses of idealistic zeal.

Or not rationalizing at all. One of Moreno’s political allies – Jose Lara, the assistant principal at Dale Junior High School – thinks murderous Communist revolutionaries like Ho Chi Minh and Che Guevara are role models for our youth. He recently published a post on his Ethnic Studies Now Coalition Facebook page praising a domestic revolutionary cop-killer: 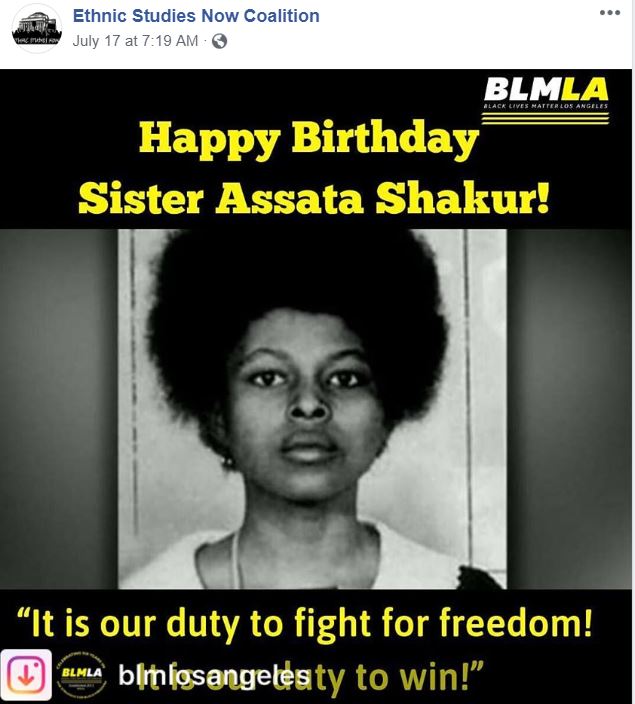 Shakur is a domestic terrorist who was convicted in 1973 of murdering a New Jersey state policeman. She escaped from prison in 1979 and five years later surfaced in Communist Cuba – where she still lives.

Should we be surprised by this? After all, both men are supporters of the model Ethnic Studies curriculum being developed for use in California public schools. The curriculum is naked political indoctrination intended to teach teenagers to view themselves as victims of oppression, to see American society and government as shot through with racism and oppression, and that the only authentic way of relating with others is through the prism of group identity and shared victimhood.

In that light, it isn’t surprising when the Morenos, Laras and others on California’s progressive fringe whitewash the history of violent left-wing thugs like Huey Newton. Perhaps they’re blinkered by such deep immersion in their ethnic identity ideology.