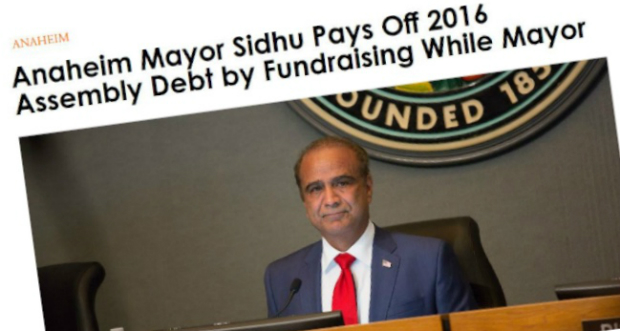 Yes – Harry Sidhu has been raising money to eliminate campaign debt left over from his 2016 Assembly race. Yes – he is currently the mayor of Anaheim.

But how is that newsworthy?

“Anaheim Mayor Harry Sidhu paid off 2016 state Assembly campaign debts and put a dent in his 2018 mayor campaign debt after heavily fundraising since December in both campaign committees.”

There’s nothing unusual about political candidates raise money to eliminate past campaign debt after they’ve been elected to other offices.  Again – how is this news? This is dog-bites-man stuff.

“It’s a move some local politics experts said is an example of loopholes in campaign finance regulations.”

Only it is not a “loophole.” A loophole is an omission or ambiguity in the law. But California campaign finances law explicitly provides for this fundraising activity – making it the opposite of a loophole.

“So, generally speaking, it is permissible to have multiple committees open at once. But, each committee must be used only for expenses associated for that election,” [FPPC spokesman Jay] Wierenga wrote in an Aug. 6 email.

When presented with this information, the FPPC spokesman didn’t respond, “Wow! We never anticipated anyone doing this and have no applicable provisions in the law! We’d better address this loophole.” He affirmed that it perfectly legal.

Nonetheless, Custodio and the quoted academics repeatedly term it a “loophole:”

“What you do see is political animals and savvy politicians are exploiting these loopholes. That’s what Sidhu is doing.” [said Moodian]

“So leaving all those campaign organizations technically running from a finance side creates a problem that regulators and lawmakers may want to address in the future. It’s an obvious loophole, but he’s not doing anything illegal,” [Cal State Fullerton political science professor Stephen] Stambaugh said.

Moodian said residents are going to have to continuously pressure the FPPC and State Legislature to address some of the campaign finance loopholes.

Except that it is not a loophole. It is expressly addressed in state campaign law – making it the opposite of a loophole. To quote Inigo Montoya, “You keep using that word. I do not think it means what you think it means.”

There’s nothing unusual for candidates to fundraise to eliminate old campaign debt when they’re in a position to do so. Yet, the article endeavors to paint it as not only odd, but insidious and morally suspect:

California State University Fullerton political science professor Stephen Stambough said the double-fundraising Sidhu did to pay back debts to himself is odd.

“Yeah it’s legal. It’s weird —  wouldn’t necessarily say it’s unethical, so long as he doesn’t use the money for other things,” Stambough said.

Stambough, an expert in local elections and campaign finance, said the contributors to the 2016 Assembly committee aren’t supporting his statewide campaign, but his position as mayor.

Donors contribute to campaign fundraisers for all sorts of reasons. In this case, they know it is to retire campaign debt from Sidhu’s 2016 Assembly race. Contributions are publicly disclosed. What is “gray” or “murky” or “odd” or “weird” here?

Moodian goes so far as to compare this to the 2010 scandal in the City of Bell:

“In the city of Bell when the LA Times revealed that the city manager and city council was ripping off taxpayers, it was a resident-led movement that saved the city of Bell,” he said.

So – legally reducing old campaign debt is equivalent to illegally misappropriating public funds? Got it.

The 1,800-word article then meanders through an array of topics unrelated to Sidhu’s Assembly campaign debt reduction – giving one the distinct feeling the article is an excuse to throw shade on the VOC’s favorite Anaheim targets. For example:

“According to campaign finance data, the Chamber of Commerce spent nearly $240,000 on Sidhu’s 2018 campaign for mayor. The Chamber paid for consulting services, digital advertising, polling and political mailers for Sidhu.”

That wording misleads readers into thinking all that money went directly into Sidhu’s mayoral campaign. Which it didn’t. That would be illegal.  An accurate summation would have been: “The political action committee of the Anaheim Chamber of Commerce spent $240,000 on independent expenditures urging voters to support Sidhu’s mayoral candidacy.” 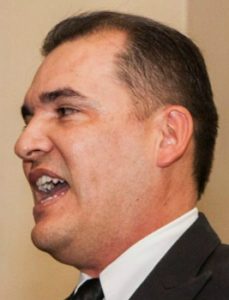 Anaheim First is another regular punching bag for the Voice of OC, which has become a platform for progressive political activists like Councilman Jose F. Moreno — unnerved by involvement of normal residents who don’t necessarily subscribe to their agenda – to wage a campaign of delegitimzation against the volunteer group.

Why invent such a clumsy characterization instead of more accurately and fairly describing Anaheim First as a group of 100 Anaheim residents focused on driving city investment into their neighborhoods?

The City Council voted in April to give the group $250,000 to conduct a survey of the city in order to make spending recommendations on $250 million over the next 10 years.

It’s more than that. The survey in question is an in-depth community assessment – an intensive process being conducted during the next several months by a highly-reputable firm, Placeworks.  What the city council approved was sharing half the community assessment’s $500,000 with private sector partners in the effort. The article makes it seem the city is paying for the whole thing.

In any case, what does that have to with Sidhu’s 2016 Assembly campaign debt?

Then there’s this gem:

“During public comment at Council meetings, residents have routinely criticized the Anaheim First group as a political extension of the Chamber of Commerce and SOAR to influence more spending on the resort area.”

The phrasing is misleading – implying a significant number of ordinary residents are trooping to council meetings to denounce Anaheim First. In fact, the article linked to in the above passage names exactly two residents: Jeannine Robbins and Duane Roberts. Roberts is a fringe political activist obsessed with Anaheim First. During public comments earlier this year, Roberts ranted “the hell with the private sector” – claiming the federal government is responsible for the existence of suburbia and the American middle class.

Robbins is a partisan Democratic political activist and staunch Moreno supporter who routinely makes unsubstantiated, spiteful allegations about their political opponents. She is also running for City Council in 2020 from District 4.

While that context is omitted from these articles, Anaheim First member Amelia Castro is portrayed as some kind of political secret agent.

One fundraiser was at the Anaheim House of Blues March 27, according to an email flier. Chamber of Commerce ambassador Amelia Castro helped coordinate the fundraiser and was the contact person in the email.

Castro, who’s a Chamber of Commerce ambassador, is also on the board of directors for the private spending advisory group, Anaheim First.

The unreported irony is there is far more diversity among Anaheim First members – demographically, socioeconomically, philosophically – compared the to political groupthink characteristic of Moreno’s follower like Robbins.

Another swipe at Anaheim First:

Ament also sits on the Anaheim First board of directors and told the City Council in April that the Chamber of Commerce originally came up with the idea at its leadership retreat two years ago — contradicting what Anaheim First representatives told people at a June community meeting when they said it was created by residents in April 2018.

How is it a contradiction when the idea for something emerges in 2017 but the actual incarnation of that idea occurs in 2018?  The idea for the Voice of OC emerged in 2008, but the creation of the Voice occurred in 2009.  Does the VOC’s recounting of its origins contradict itself? No – there’s no contradiction in either case.

And again -what does this have to do with debt reduction for Sidhu’s 2016 Assembly campaign?

The answer is nothing. It’s hard to avoid the impression this article’s purpose is creating the perception Harry Sidhu is doing something wrong, by weaving together a lot of unrelated things to make it seem something unsavory is going on.  It certainly fits neatly into the narrative mythology Councilman Moreno and his political allies are attempting to weave for the 2020 elections – a narrative that seems to have found friendly amplification in Voice of OC reporting in 2019.

The Voice is a valuable resource for the public, so it’s unfortunate that since the end of 2018, there’s been a noticeable shift in its Anaheim coverage – more participatory than reportorial.