Kotkin: Public Schools Should Be Places Of Learning, Not Propaganda 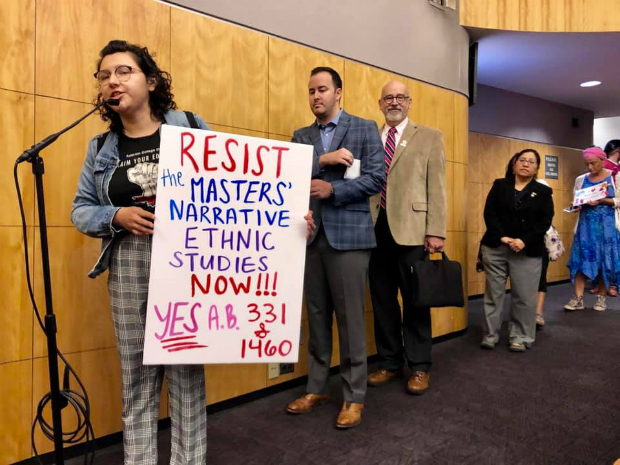 Yep. Nothing political about Ethnic Studies.

[In an op-ed that originally appeared in the OC Register on August 25, Chapman University scholar and demographer Joel Kotkin and co-athor Doug Havard provide trenchant insights into how the education establishment’s hostility to charter schools and increased emphasis on political indoctrination (e.g. the ethnic studies curriculum) is most harmful to those students and families these social justice warriors purport to champion.]

Public Schools Should Be Places Of Learning, Not Propaganda

by Joel Kotkin and Doug Havard

California likes to think of itself as the brain center of the universe, but increasingly much of that intellectual content comes from somewhere else. Once a leader in educational innovation and performance, California is now toward the bottom of the pack.

Despite these failings, the powerful California Teachers Association, emboldened by the huge Democratic gains in 2018, continues to push an aggressive and fundamentally reactionary approach to education, spending upwards of a million a month to curtail the surge of innovative charter schools in the state. This is particularly critical in lower-income communities, such as the East Bay, central Orange County and Los Angeles, where the state’s public schools have consistently failed and where some charters have made considerable strides through reforms and innovations.

The scariest thing about the ethnic studies curriculum may not be its ultimate content but how it reflects an ideology that advocates indoctrination of youngsters who often don’t even have the most basic understanding of sociology or history.

Often incapable of meeting basic grade-level English language and mathematics standards, these students would be forced to learn academic jargon like misogynoir, cisheteropatriarchy and hxrstory.

Indoctrinating the young has long been a favored priority for activists, including on the religious right. After a decade or two of concern with actual performance, ideological information and indoctrination has been increasingly de rigueur in schools through the West. Educators have been moving toward scrapping such things as exit exams and clearly comparable measures of achievement.

Yes, these young people may be getting diplomas, but do they have the skills, academic as well as social, to compete in the real world?

So far, the answer is largely no. California’s 8th graders, on average, have fallen well behind the rest of the country in science, mathematics and reading scores — including even demographically similar states such as Texas and New York. Almost three of five California high schoolers are not prepared for either college or a career; the percentages are far higher for Latinos, African American and the economically disadvantaged. It’s hard to see how they will benefit by being schooled in an anti-capitalist ideology while countries like China and India focus on preparing students for the challenges of the global economy.

Is there an alternative model?

California’s educational shortfalls are clear to most business leaders we interview. Whether on the shop floor, or in a laboratory, California’s inattention to basic skills education has had catastrophic results in many communities. This is particularly true in manufacturing and engineering — historically strengths of the state, notably in the Bay Area and across Southern California.

Through initiatives such as the Maritime Center of Excellence and the Center for Community and Industry Partnerships at Long Beach City College, the coalition continues to build innovative models for skills-based education aligned to in-demand industry jobs as well as connecting students to those career opportunities. Similarly, initiatives have been launched in both the Central Valley and the Inland Empire to build similar educational partnerships with industry.

Ultimately most firms here don’t need ideological warriors nearly as much as trained technicians of all sorts, well-trained managers and practically minded engineers. You can’t run a high-tech lathe, manage logistics or design programs for space vehicles with ideology.

Education should not be a political issue

Ultimately, the biggest losers from the shift from skills to indoctrination, as well as the assault on charter schools, will be those about whom the progressives most lament about: the poor, minorities and immigrants. In contrast, a failing education system, particularly in poor communities, does not much disturb a well-educated hipster without children or those wealthy enough to live in an elite suburb or pay for private school.
Given its global allure and gobs of cash, Google may not need better local high schools and community colleges since they can draw their employees from everywhere. But most Californians and local businesses depend on basic public education.

Public schools need to focus not on ideology but on intelligent pragmatism. They should focus on both on improving reading and math scores and becoming reliable suppliers of talent to our local companies.

It may seem as simply as two plus two, but, sadly, for too much of our educational establishment this simple logic does not compute. This growing dysfunction will only change when Californians, particularly parents and companies, insist our schools perform as they were meant to do — training the future workforce and nurturing the next generation of the middle class.

Joel Kotkin is the R.C. Hobbs Presidential Fellow in Urban Futures at Chapman University in Orange and executive director of the Houston-based Center for Opportunity Urbanism. Doug Havard is a public-school educator and Ph.D. student at Chapman University’s Attallah College of Educational Studies.