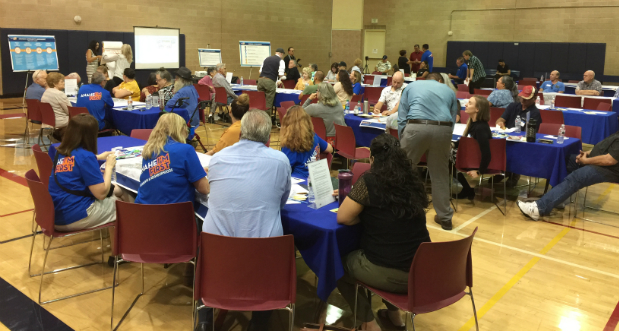 More than 100 people attended the first in a series of six town halls – one for each council district – being organized by Anaheim First, as part of its Anaheim Community Assessment to assist in city in setting priorities for neighborhood investments.

Anaheim First is a resident-driven non-profit focused on improving quality of life in Anaheim neighborhood via resident input through the Anaheim Community Assessment and ongoing discussion and organizing among residents. It is resident-controlled neighborhood leadership council with support from Anaheim Chamber of Commerce, Visit Anaheim, and the Anaheim Community Foundation.

The assemblage of residents gathered on Wednesday, August 28 from 5:30 to 8:30 at the West Anaheim Youth Center for the District 1 town hall. Professional facilitators briefed the residents on the how and why of the town hall meeting, going over the various aspects of neighborhood investment and improvement the community assessment is intended to cover.

The community assessment and accompanying town halls are taking place against the backdrop of Mayor Harry Sidhu’s plan to invest $250 million in new revenues into Anaheim neighborhoods during the next decade. The assessment will help guide how to prioritize those investments. 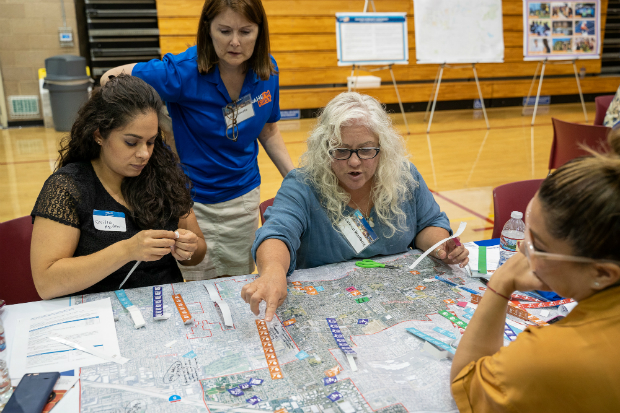 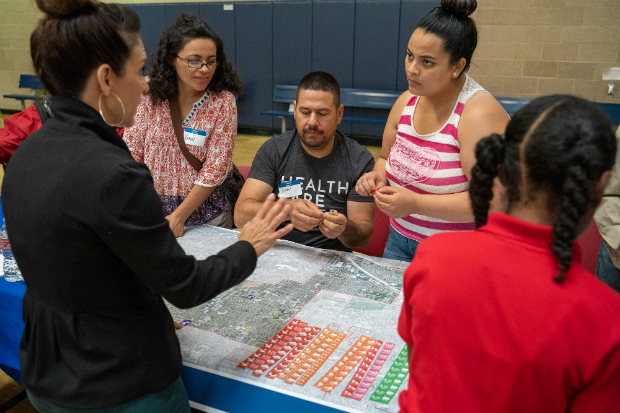 Residents convened in in small groups of half a dozen at tables with oversized maps of District 1, and discussed the kinds of improvements they wanted to see in their neighborhoods, what they viewed as the primary challenges and opportunities in their part of the city. They placed adhesive squares with logos representing street improvements, parks, etc. and placed them on specific locations on the map to precisely indicate where and what kind of investments they’d like to see in District 1.

Afterward, a spokesperson for each table stood up and talked about the priorities their resident group had developed – all of which was transcribed into a mater inventory on oversized sheets of paper. 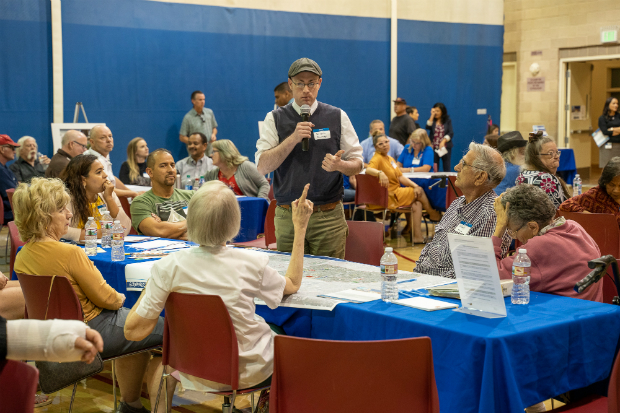 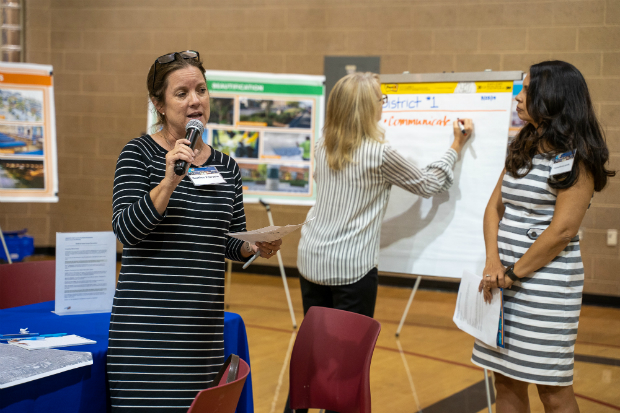 Afterward, town hall participants “voted” for those suggestions and priorities about which they felt strongest. 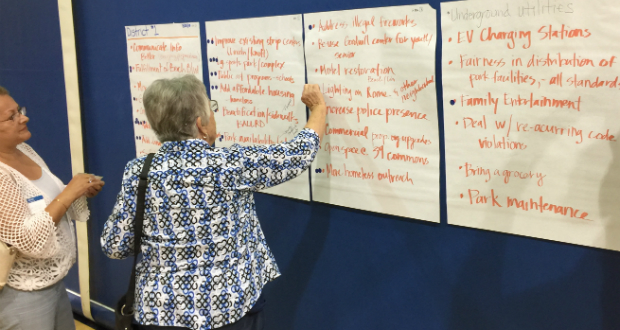 Overall, the focus of the town hall was to encourage participating residents to be vocal about what they wanted for their neighborhoods; to listen to what mattered to other residents, even if it didn’t top their own priorities; and try to arrive at a consensus. 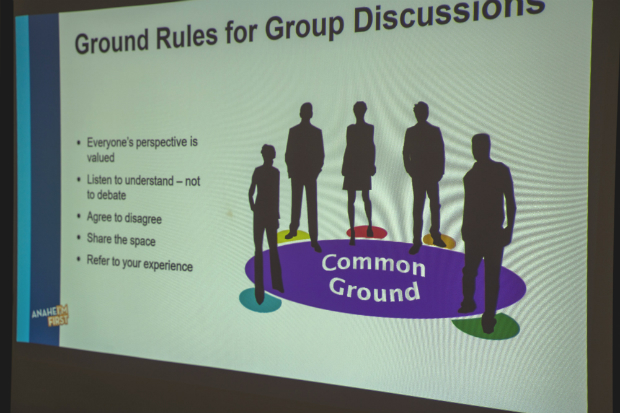 Lynch and two minions rolled into the town hall late – arriving directly from a Democratic Party of Orange County “Blue Wave Rising” campaign rally in Buena Park.  Lynch took a seat at one of the small group activity tables and hijacked the conversation as soon as those residents commenced their discussion about neighborhood priorities – trying to convince participants that Anaheim First was an Anaheim Chamber of Commerce plot to generate support “corporate subsidies” for the Angels and Disney. After listening patiently to his tirade, residents made it clear to Lynch – a resident of Bellflower – that they wanted to talk about their neighborhoods’ priorities and put stickers on the map. 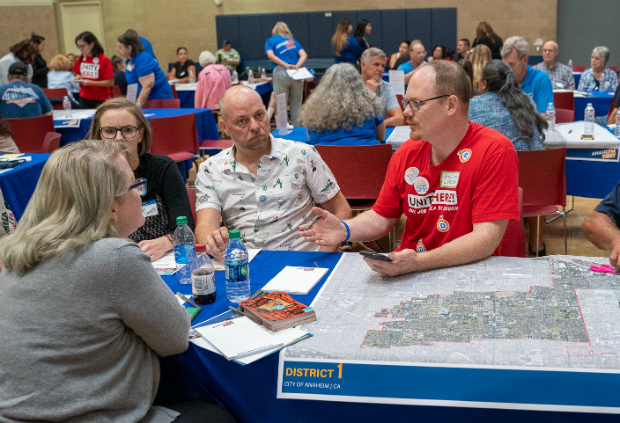 Lynch then migrated over to the Anaheim police officer standing nearby, trying to convince him Anaheim First was a Chamber scheme to secure corporate subsidies for the Angels and Disney.

“That’s money that could go into your pension,” Lynch told the officer.

Lynch went on to question the competence and ability of the residents involved in Anaheim First, and even compared the town halls to his local assemblywoman’s use of the legislative franking privilege – saying she used taxpayer resources to engage in political campaigning. I’m not sure who Lynch’s state Assembly representative is.

And so it went as Lynch went from person to person trying to convince them the Anaheim Community Assessment served a nefarious purpose – with the determination of a street corner preacher trying to convince passersby they’re going to Hell unless they repent.

As the small group activity portion of the town hall wrapped up and residents got ready to report back their findings, Lynch and his minions departed.

The upshot: UNITE-HERE had the opportunity to participate in a constructive way – or at least observe the town hall with an open mind. Instead, the militant, partisan union tried to blow the town hall up.

Meanwhile, participating residents embraced the opportunity to provide their granular, ground-level input in to where the city should invest new revenues.