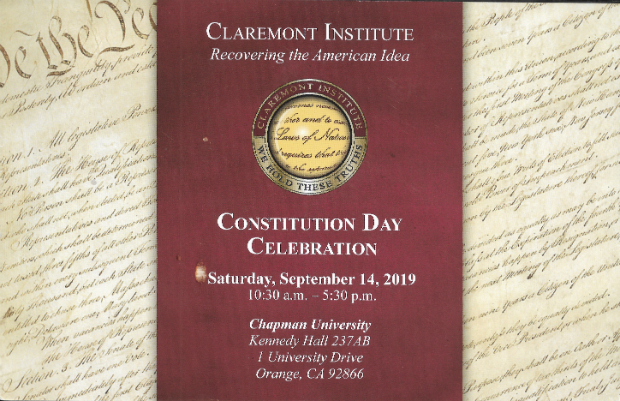 Few American institutions have worked longer, harder, more effectively and more articulately than the Claremont Institute at recovering and reviving understanding of the principles of the American Founding – which are now under more concerted and intense attack than anytime in memory.

This Saturday, the Claremont Institute invites all to its annual Constitution Day Celebration at Chapman University, under the auspices of the Institute’s Center for Constitutional Jurisprudence – headed by Dr. John Eastman.  This commemoration of the 232nd anniversary of the signing of the U.S. Constitution is being honored “with panel discussions addressing some of the most pressing threats to our constitutional system.”

Ticket price: $50 for the general public and $10 for students.

Our program will also feature a discussion with the recipient of this year’s Ronald Reagan Jurisprudence Award, Judge David Sentelle, Chief Judge of the of the United States Court of Appeals for the District of Columbia Circuit, during a private luncheon.