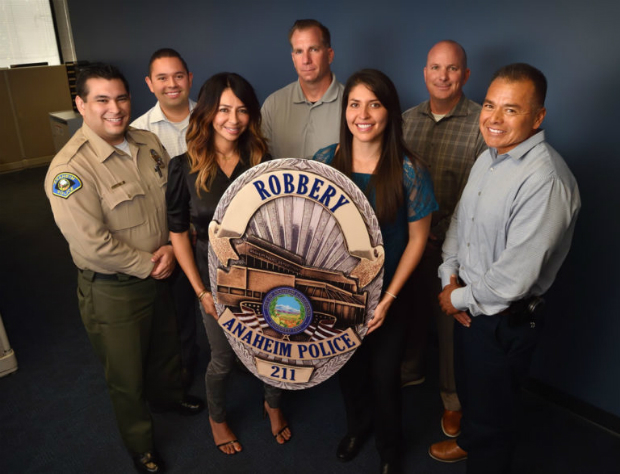 On a recent weekday morning, detectives and co-workers on the Anaheim PD’s Robbery & Assault Detail were standing at their workstations, their attention intensely focused on a…

The shot was too hard, and the ball pinged off a cubicle.

No, the members of the Robbery & Assault Detail don’t make a habit of goofing off on the job.

Rather, the quick session of office golf was a way for them to blow off steam and build camaraderie in a unit known throughout the station for being particularly tight. For example, every workday at 6 a.m., members of the Robbery & Assault Detail work out together in the station gym.

“As a supervisor, my goal has always been to create an environment that allows for people to thrive and be successful,” says Det. Sgt. Mike McAlpine, who has run the Robbery & Assault Detail for five years.

“Basically every case we read is negative, and our job is to solve problems. As a result, this can be mentally draining,” McAlpine adds. “Relaxing and decompressing is important for us to be productive.”

Last year, the detectives and investigator were assigned 1,348 cases — cases consisting of robberies, carjackings, assaults, extortions, and weapons violations. Out of the 1,348 cases, 407 were robberies and carjackings. The detail is on pace to investigate a similar amount of crimes this year.

In the unofficial pecking order of law enforcement units to which detectives are assigned, Robbery & Assault typically is viewed as one notch below homicide — the glamour unit. Most detectives cut their teeth investigating gang crimes, family crimes, and burglaries before moving onto Robbery & Assault.

Click here to read this rest of this article.