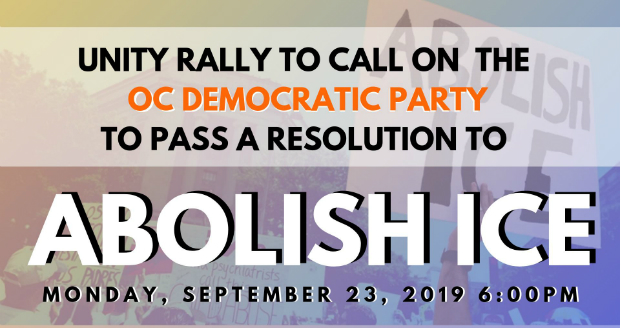 Will the Democratic Party of Orange County head over a political cliff this evening by approving a resolution to abolish Immigration and Customs Enforcement, the federal agency charged with enforcing the nation’s immigration laws?

The DPOC has twice tabled attempts to bring the resolution to a vote. According to sources, this is at least in part due to pressure from the Democratic Congressional Campaign Committee (DCCC), which has to defend incumbents newly-elected to Orange County congressional seats in which Republicans voters outnumber Democrats or are at parity.

However, the increasingly left-wing activist base of the Democratic Party is passionate about abolishing ICE. This vocal segment equates immigration enforcement with oppression, doesn’t differentiate between legal and illegal immigration and effectively supports open borders – extreme stances at odds with mainstream American opinion.

During past week, Denver Abolish ICE activists (in tandem with Denver Communists – yes, really) have been mounting a series of direct actions in Colorado. For example, 100 of them descended on the neighborhood where Johnny Choate, warden of the ICE detention facility in Aurora, lives with his family – disrupting the peace of the neighborhood and trying to provoke local police. These actions are part of their “Confront La Migra Where They Live” campaign.

These excerpts from this open letter to DPOC Central Committee members by progressive activist Laura Kanter are a window into the mindset of OC leftists on this issue.

I want to tell you that we cannot support the existence of ICE and also say we support justice for all.

If our concept of the border is that it is in place to protect us from unwanted others, our understanding is by default infected by nationalism and xenophobia.

And what does ICE do? They are hyper-military trained police whose job is to go after people who they believe look like immigrants and put them into cages and detention camps.

ICE does not protect the border.

ICE is not necessary for policing criminals.

ICE does not work for us.

ICE works for the politicians who support, and the systems that profit off of, the dehumanization and criminalization of brown people; in this case, immigrants and the families of immigrants.

[ICE exists] to increase the wealth and power of some while maintaining the dehumanization and ultimately the genocide of poor brown people. By deportation or by death, in the camps or in their countries of origin.

The holocaust did not begin with the gas chambers. First, Jews were detained in their own communities – the ghettos. Jews could not leave and non-Jews could not enter. Conditions deteriorated. People became sick and died. And no one intervened.

And then the Nazis built the concentration camps and they started to “liquidate” the ghettos. The people were sent to concentration camps. Conditions were inhumane. Some were subjected to slave labor. Many got sick and died. And no one intervened.

And then they built the gas chambers.

Of course, that would never happen here. Right?

To do other than call for the abolition of ICE is to support racism, nationalism and xenophobia – and to support the regime that elected donald trump.

In Kanter’s view, supporting the existence of ICE puts America on the road to building death camps. In her mind, any person who supports the enforcement of our immigration laws – or even the traditional concept of a national border – is a racist and a xenophobe.

Any normal voter who read this screed would dismiss it as nutty. Many local progressive activists and elected officials, however, are in synch with Kanter’s extreme view of ICE officers as a “bunch of military thugs.”

Moreno is a DPOC Central Committee member but missed the last meeting at which the Abolish ICE resolution came up, due to a scheduling conflict with the “agenda talk” meetings he holds the night before city council meetings. However, he held this week’s agenda talk meeting to yesterday, freeing him to attend tonight’s meeting.

Moreno has been arguing that rather than re-trenching to consolidate the gains of 2018, Orange County Democrats should push the pedal-to-the-metal and double down on progressive-Left issues. 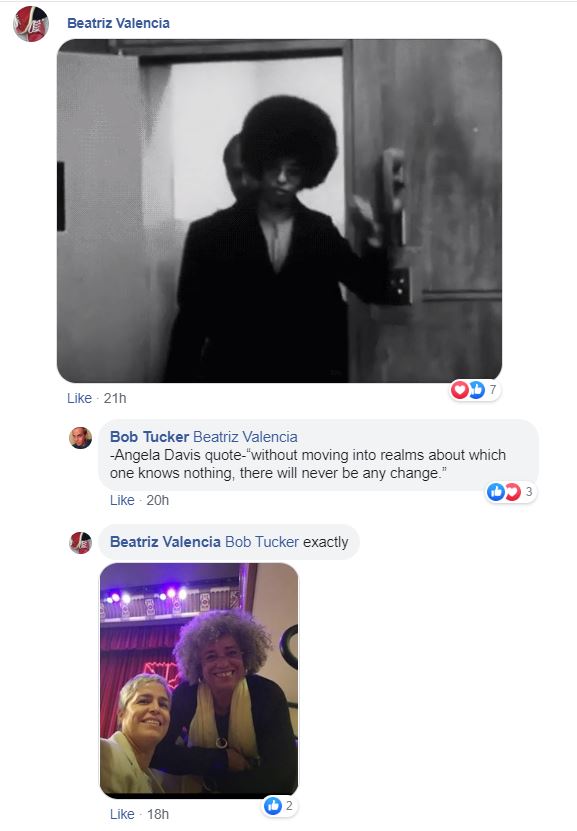 Davis is an unrepentant Communist who spent her life defending the Soviet Union, it’s imperialism in Eastern Europe and its oppression of political dissidents. For example, Davis denounced political prisoners in the Soviet Gulag as “Zionist fascists and opponents of socialism.” For some inexplicable reason, left-wingers think Davis cool and hip.

Irvine Councilwoman Melissa Fox chimed in with her own attack on ICE:

Fox is running in the 68th Assembly District against the Republican incumbent, Steven Choi. AD68 has a plurality of Republican voters. It’s a safe bet most AD68 voters do no agree with such an extreme view of ICE.

The sponsor of the Abolish ICE resolution is Victor Valladares, another DPOC Vice Chair and Moreno protege. Valladares had been hired by the DCCC as a field organizer in CA48, where freshman Rep. Harley Rouda will be facing a determined Republican effort to oust him. Republicans hold a 7-point registration advantage in CA48.  The Rouda campaign steered clear of issues like abolishing ICE and the Sanctuary State law during the 2018 election, understanding them to be political losers for him. The DCCC is sensitive to the potential damage a DPOC endorsement of abolishing ICE can do to Rouda’s re-election efforts, and fired Valladares after he persisted in pushing the Abolish ICE resolution.

Will the DPOC Central Committee pull back from this political cliff? Or will it give way to the passions of revolutionaries and zealots who are totally disconnected from the average American, and plunge right over?