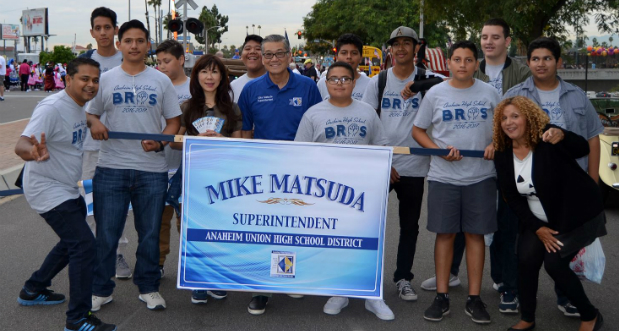 Why is the Anaheim Union High School District Board of Trustees paying $1,800 for Superintendent Mike Matsuda to go to Philadelphia to participate in a conference whose purpose is organizing political opposition to charter schools?

At its October 10, 2019 meeting the AUHSD Board of Trustees unanimously approved up spending up to $1,800 for Superintendent Matsuda to travel to the 2020 National Conference of the Network for Public Education (NPE).

The NPE is a teacher union-funded group whose purpose to organize political opposition to charter schools across the nation. It virulently against any form of educational choice that falls outside the teacher union-dominated status quo.

The NPE’s 2020 conference features nearly 50 panels – virtually all of them focused on various methods and strategies for “fighting charters” and “defending public schools.”  Matsuda is a co-presenter on a panel led by Carol Burris, the executive director of the NPE. Other presenters on the panel include Adell Cothorne, a principal-turned-professor with identity politics views.

Does spending $1,800 in district funds to send Matsuda to a political conference enhance the education of AUSHD students? Will it address the district’s low test scores, or low ranking in terms of college acceptances for graduating seniors?

The answer is: it doesn’t. It only serves to subsidize Superintendent Matsuda’s war against charter schools.

Hence, the unremitting hostility of those who have a vested interest in the public education status quo. Here in Orange County, the AUSHD has become the epicenter of anti-charter school activism since Matsuda’s appointment as superintendent. The district’s hostility to educational choice extends to denying hundreds of transfer requests by parents seeking better learning opportunities for their children outside the AUSHD – to a degree county education officials view as “unbelievable.” When those students leave, their $13K in per-student funding follows them – and keeping those dollars in the district matters more to the AUHSD than what is best for those kids educationally.

We e-mailed AUSHD Public Information Officer John Bautista asking how this trip benefits AUSHD students and staff, as well as how Matsuda responds to concerns he is using taxpayer dollars to participate in a political advocacy conference – advocacy that is at odds with the political opinions of many AUHSD residents.

Perhaps that because he is using AUHSD taxpayer money to engage in political activity that many, if not most , AUSHD taxpayers oppose. Shouldn’t Superintendent Matsuda indulge in his political crusades on his own dime, rather than the taxpayers?