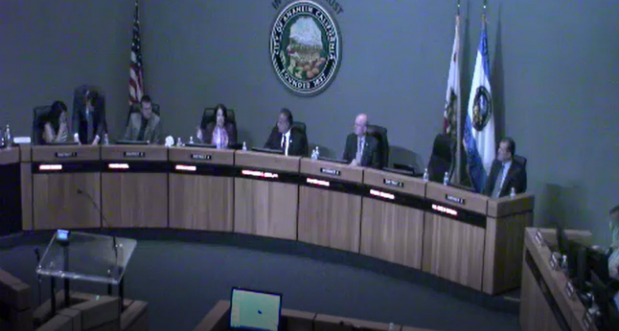 The Anaheim City Council voted to amend its rules for councilmembers to place items on the council agenda for consideration, in a move prompted by Councilmember Jose F. Moreno repeatedly re-agendizing items after the council had voted them down.

In order place an item on the council agenda, a councilmember needs to assent of two other councilmembers. The purpose is to ensure the item could ultimately garner council support. Otherwise, a single councilmember could waste the council’s and public’s time by unilaterally agendizing items with no chance of adoption.

Under the new rules, proposed by Councilman Trevor O’Neil, if the city council rejects an item, the proposing councilmember must wait six months before bringing it back for re-consideration.

Furthermore, if a councilmember fails to secure two votes to agendize an item, they must wait six months before making another attempt.

“It’s simply intended to curtail any abuse of the process by repeatedly agendizing items that have already been brought before us for we can focus our time, staff’s time ad the public’s time on other pressing items that we’ve yet to take up,” said O’Neil.

For much of this year, Moreno has repeatedly agendized proposals for rent control on apartments and mobile home parks, consuming many hours of staff time, staff resources and hours of raucous public hearings. Every time, a majority of the city council has rejected these measures of counter-productive and ill-conceived. Moreno response has been to re-agendize them.

Moreno hopes to gain political control of the city council in the November 2020 elections, and he has been using council  meetings as platforms to generate attention for his political platform, which includes city-wide rent control.

Moreno expressed his opposition to O’Neil’s amendment, saying “It is already difficult enough to put agenda items.” In reality, Moreno is nearly always successful in securing the support of two councilmembers to agendize his proposals. Moreno went so far as to threaten to call the American Civil Liberties Union if the council adopted O’Neil’s rule change.

Councilwoman Denise Barnes talked at length, claiming the council majority kept trying to “silence” her – notwithstanding that she and Moreno talked more than anyone other councilmembers.

Barnes also mounted a confused effort to amend O’Neil’s proposal to A) allow councilmembers to place items on the agenda by getting signatures from 50 residents and B) require councilmembers to generate their own staff reports on items they agendize.

O’Neil rebutted criticism from Moreno, Barnes and their raucous supporters in the chamber that the proposed change “silence” them – noting the council’s rules already allow for urgency measures.

“There’s nothing that would preclude a motion to suspend the rules to have an agenda item that was previously heard within the 6-month time window, from being heard again,” noted O’Neil.

Moreno supporters in the audience reacted with predictable hysteria. The same half dozen people who speak during public comments at every council meeting claimed they were being silenced and denounced Sidhu and the council majority.

One of the gadflies – Democratic activist Wes Jones – posted a photo of Sidhu as Adolf Hitler: 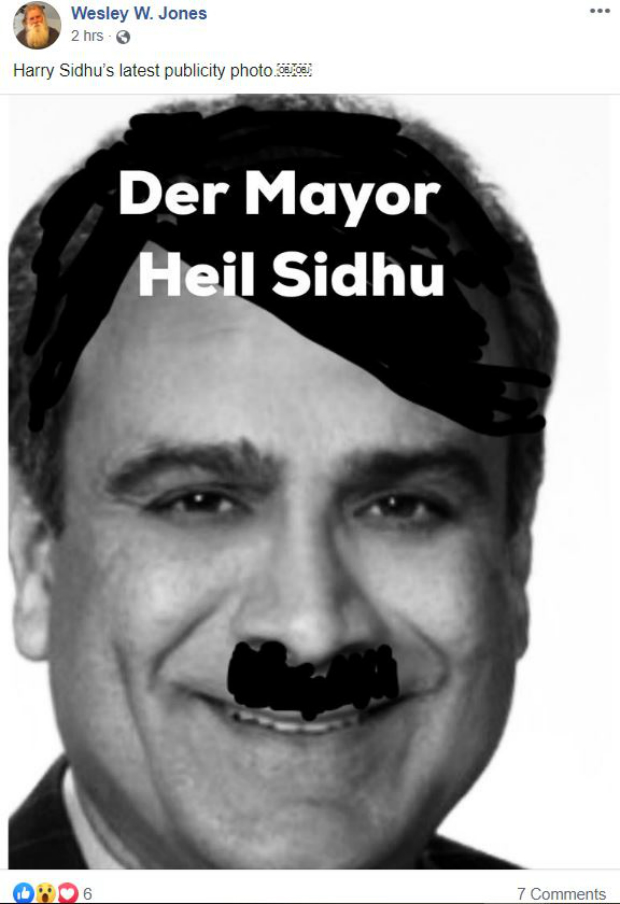 Hmmm. A white man attacking an Asian immigrant by comparing him to a genocidal dictator. That’s not racist, is it? Mr. Jones might want to check his white patriarchal privilege and sign up for some cultural sensitivity training to treat his xenophobia.