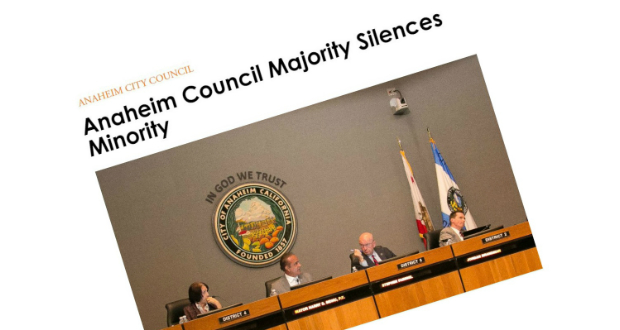 It should be clear to any fair-minded person that the Voice of OC‘s coverage of Anaheim city goverment has passed into the realm of opinion journalism.

Take, for example, this morning’s Spencer Custodio article on the council’s action to amend the rules for placing items on the agenda.

“Anaheim Council Majority Silences Minority” screams the tabloid-style headline. The problem is it isn’t true. It’s definitely an opinion, but not a factual one.

It also states that if a councilmember fails to garner the support of two colleagues to agendize an item, he/she must wait six months before trying again.

That is hardly silencing anyone. It is rare that any Anaheim councilmember fails to secure the necessary two votes to place items on the agenda.

What’s more, the rule change doesn’t single out Councilmembers Jose F. Moreno and Denise Barnes but applies to all councilmembers.

Furthermore, it is ridiculous to assume anyone of anything can silence Moreno, who is far and away the leading yakker on the council dais. Give the District 3 councilman two minutes to talk and he’ll turn it into 10.

“Anaheim’s City Council majority members have decided they don’t need to consider policy proposals from the minority more than once in a six-month period.”

That sentence belongs in an editorial, not a news article.  As noted, the rule change applies to all six members of the city council. Mayor Pro Tem Lucille Kring is a member of the current governing majority. If she fails to get two votes to agendize something – which has happened – she’ll have to wait six months before trying again, just like any other councilmember.

In addition to being his subjective opinion, Custodio also factually misrepresents what the rule change entails. His desire to editorialize results in a statement that doesn’t make sense, by literally claiming Moreno and Barnes can only agendize policy items once every six months.

Custodio fails to note the inconvenient reality that the newly-adopted rule change would have little real impact on the ability of Barnes and Moreno – or any coiuncilmember – to bring matters before the council for consideration.  Only Moreno’s constant re-agendizing of rent control – an abuse of the priocess for politicial purposes – would have been affected.

Anaheim’s City Council majority is looking to institute a gag order of sorts on minority-faction council members by limiting how many times an elected official can agendize an issue for public discussion.

Again, this is editorializing, not reporting. Calling the rule change a “gag order” is inflammatory and inaccurate. It is Custodio camouflaging his opinion as news reporting.

Here’s another example in the lede paragraph from an October 29 Custodio article on the Angel Stadium appraisal:

Anaheim’s City Council is not interested in publicizing the value of their public stadium and also doesn’t want the public to have much time to look over potential stadium deals before they are approved.

Again, this is pure editorializing – Custodio representing his opinion as fact.  And his opinion isn’t even factual.

The fact is when it authorized the appraisal in November 2018, the city council stated it would be ultimately be made available to the public. However, it gave no direction and took no action regarding the timing of its publication – and has taken no action to the contrary since that time.

There is disagreement on the council as to when the appraisal should be made public – and there is a strong case for keeping it under wraps until the appropriate moment during negotiations with the Angels. But that is fundamentally different than Custodio’s claim the council doesn’t want the public to know the stadium’s value.

The same goes for Custodio’s claim the council opposes giving the public siufficient time to evaluate any agreement the parties hammer out.

Can he point to any example where a councilmember has announced, “I don’t want the public to have much time to look over potential stadium deals before we approve them.”  No – because there are none. Custodio’s claim is unsubstantiated speculation.

One has to wonder where the Voice of OC‘s sense of outrage was last year when Mayor Tom Tait spent months negotiating in secret with the Anaheim Ducks to sell them city property surrounding the Honda Center? The negotiations were an open secret. And the deal – and appraisal of the land – weren’t released to the public until four days before the council vote.  There wasn’t a peep from the Voice of OC, nor for that matter from any of the partisans who now posture as champions of public transparency.