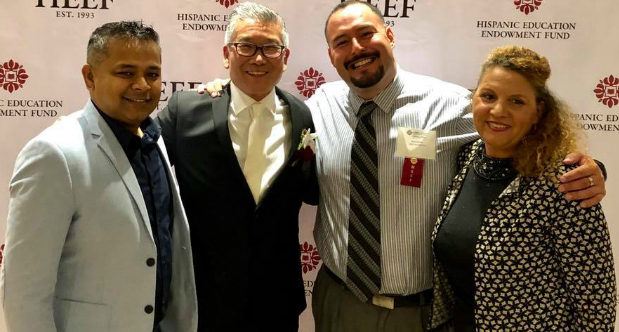 The Anaheim Union High School District has signed an unusual memorandum of understanding with the Orange County Labor Federation (OCLF) under which AUHSD parents are put through 10-week “civic engagement” training program run by the OCLF through the end of June, 2020.

“Civic engagement” is the innocuous buzzword-of-choice for officially-sponsored political activism, and is all the rage in politicized school districts such as AUHSD.

The OCLF is the Orange County chapter of the AFL-CIO, with 90 member unions representing 200,000 members. Under the agreement, the OC Labor Federation will hold these training sessions on school grounds. The AUHSD has not responded questions as to whether the training program takes place during or after school hours.

On October 22, Anaheim Blog also asked the AUHSD whether the MOU was initiated by the district or the OCLF. The AUHSD still has not responded to those questions.

The AUHSD Board of Education unanimously approved the MOU at its October 10 meeting. There was no staff presentation explaining the purpose of the agreement, who initiated it or the content of the training. The – trustees Annemarie Randle-Trejo, Al Jabbar, Anna Piercy, Brian O’Neal, Katherine Smith – approved it without asking questions or any discussion.

Were they simply uninterested in this unsual agreement? Or were they already fully informed and chose to keep mum for the public?

The OCLF describes its mission as “build[ing] worker power through union organizing, political education, economic development and training programs to give workers a voice to improve their lives” and “we mobilize our members and community partners to advocate for social and economic justice”:

“With the united effort of our unions in Orange County, we seek to build a labor movement that will help lead a new wave of political and workplace organizing for worker justice. We are committed to working together and building the Orange County labor movement into an organization that becomes the center of activity for all labor/progressive campaigns.”

In other words, the OCLF is an inherently, intrinsically political organization. There’s nothing wrong with that. But that truth provides the critical context for this formal alliance between the OCLF and AUHSD – especially since the latter is supposed to be a non-political institution whose mission is educating children, not training platoons of activists for “civic engagement.”

The MOU provides no information as to the “civic engagement” program’s actual content or curriculum – it simply states the sessions will “consist of lectures, introductions, testing, guest speakers” and the “distribution of informational materials and assignments.”

On October 22, Anaheim Blog e-mailed AUHSD PIO John Bautista asking for copies of materials to be used in the training. On November 1, Bautista replied that “As the Academy has not started yet, we do not have details to share at this time.”

In other words, the AUHSD is claiming it negotiated an agreement with the OCLF to run parents through a 10-week “civic engagement” training course without knowing anything about the actual training program.

Just as hinky is the manner in which this agreement came about. On October 22, Anaheim Blog submitted a California Public Records Act request to the AUHSD requesting “any and all electronic communications – including but not limited to e-mails, text, social media messaging – between AUHSD and the Orange County Labor Federation between January 1, 2019 and October 22, 2019.” This requested included “any communications between Superintendent Mike Matsuda, Asst. Superintendent Jaron Fried, any other member of the AUHSD executive leadership and any member of the AUHSD Board of Education – and OCLF executive director Gloria Alvarado and any other OCLF official.”

District PIO John Bautista responded on November 1 by providing six press releases and e-blasts the district sent out in September and October of this year. The connection between these documents and the OCLF?: The e-mail of former OCLF Executive Director Julio Perez was in the included in the distribution list.

When this was pointed out to Bautista, he replied:

“I looked a bit further regarding your question and asked Araceli Chavez, our Parent and Community Engagement Coordinator, who said the only communication so far has been face-to-face regarding the Civic Leadership Academy. Consequently, that is why you do not see any electronic correspondence in the attachment you requested.”

Needless to say, it is a highly unusual, non-transparent way for the AUHSD – or any public agency – to conduct business  outside of normal communications channels.

If the AUSHD is being truthful, this appears to be a deliberate attempt to avoid creating any public record as to the intent and nature of this MOU.  then it begs the question of why district leaders would go to such extraordinary lengths to avoid creating any public record? If this is such an innocuous arrangement, why negotiate it off-the-books?

The alternative explanation is the district doesn’t want to disclose its communications with the OCLF and instead claims  the MOU was hammered out entirely in person.

Either way, this contradicts AUHSD’s public committment to transparency.

It also raises a number of questions:

OCLF Executive Director Gloria Alvarado has not responded to multiple attempts to contact her regarding this agreement.

The AUSHD Board of Trustees asked no questions and held no discussion, so the public can learn nothing from them. Araceli Chavez (and presumably Assistant Superintendent Jared Fried) conducted their negotiations with the OCLF off-the-books – so there’s nothing we can learn from the absence of a public record there.

AUHSD voters should keep this shady deal in mind next time any member of the AUSHD leadership or Board of Education talks about transparency.