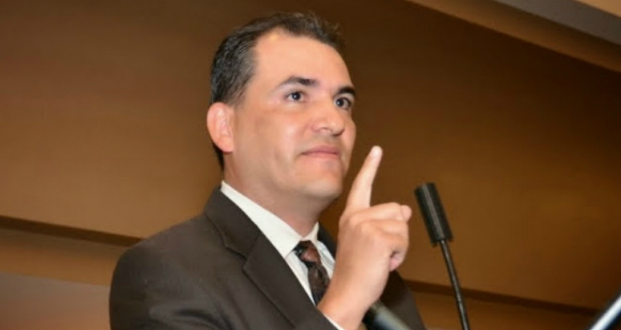 In early October, Councilman Jose F. Moreno claimed the Angel Stadium appraisal had been leaked. He claimed an unnamed resident asked him about the appraisal and allegedly nearly guessed the amount.

Based on Moreno’s allegation, the Voice of OC published a story claiming the appraisal was “apparently leaked”:

Moreno said a resident asked him about the appraised value within a week being presented the appraisal.

“I was asked directly is this the max appraised value and I was given a number and I was struck by how accurate that number was and basically, to the folks that asked me, I could not deny the number,” he said, adding he couldn’t confirm the number either.

It’s unclear whether the Voice verified Moreno’s claim or the identity of the “resident.”

A month later, Moreno repeated his claim in this November 7 story in the Voice of OC:

Moreno said, after Tuesday’s meeting, he was sent a text message asking about the value of the 155-acre stadium land and said the numbers cited in the message were “98 percent accurate.”

It is unclear whether the Voice of OC saw the text or verified its existence.

If it was indeed a text, then Moreno would still have it – city policy stipulates electronic communications such as text and e-mails must be retained for at least 90 days. The text from the mysterious resident falls within that 90 day window.

On November 7, Anaheim Blog submitted a California Public Records Act request to the City of Anaheim requesting the text Councilman Moreno claims was sent to him.

Earlier today, the Office of the City Attorney’s responded that no such text could be found:

“Despite a diligent search, the City has no records responsive to your request.”

Interesting. It stands to reason the diligent search included asking Councilman Moreno for the text in question. And yet, no text was uncovered.

What are we to make of this? Did Moreno delete the text in question, despite the 90-day retention policy? Was the text ever sent? Did city staff ask Moreno for it? Was Moreno’s allegation just a ploy: claim the appraisal was leaked in an attempt to buffalo its release on Moreno’s timetable?

There’s one individual who can clear this up quickly by producing the text in question.