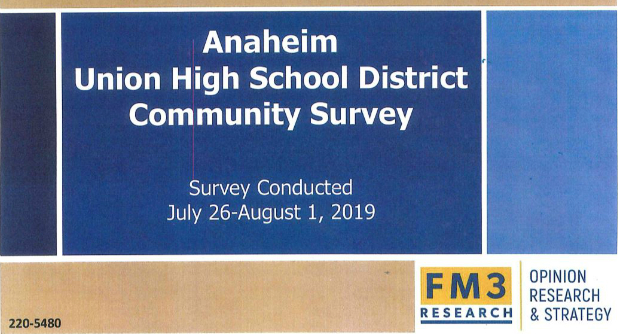 The campaign to convince Anaheim Union School District voters to approve a $398 million school bond on the March 2020 ballot is revving up, as proponents opened up a campaign committee, “AUHSD Citizens for Quality Schools,” on October 25.

The committee treasurers are Tammi McIntyre and Joanna Barcelona, who provide treasurer services for many progressive Democrat candidates in Orange County.

If experience is any guide, district vendors will soon be dunned for campaign contributions – if they haven’t been already. Don’t be surprised to see many of the vendors on the AUHSD check register also on the list of campaign contributors when AUHSD Citizens for Quality Schools files its end-of-the-year campaign finance disclosure.

The real question is who is and will be doing the dialing-for-dollars?

Although the nominal cost is $398 million, the actual cost will likely be about double that amount, after accounting for interest.

The AUHSD forecasts approximately $1 billion in desired facilities projects and improvements. The March 2020 bond, along with the $298 million bond passed in 2014, or more properly seen as an installment plan.  Voters would likely choke on a billion dollar bond – witness the fate the Capistrano Unified School District’s billion dollar bond in 2016.  It’s easier to get voters to approve $1 billion in bonds in chunks over time, rather than all at once.

AUHSD Paid Nearly $40,000 For Polling To Determine Election Messaging
The district hired the polling firm FM3 Research to conduct a public opinion survey to determine voter support for a new school bond, as well as test messaging for persuading voters to vote for the bond in the March 2020 election.  The survey of 600 voters was conducted July 26-August 1, and cost $38,850.

Click here to see the top line results. It does not provide the complete survey result cross-tabs and breakdowns.  A district spokesperson claims this is the only document the AUSHD received from FM3 Research.

One thing that emerges is the district appears to have settled on the $398 million figure due to the polling results. The survey tested voter reaction to bonds of $298 million, $348 million and $398 million; the largest bond garnered the most support: 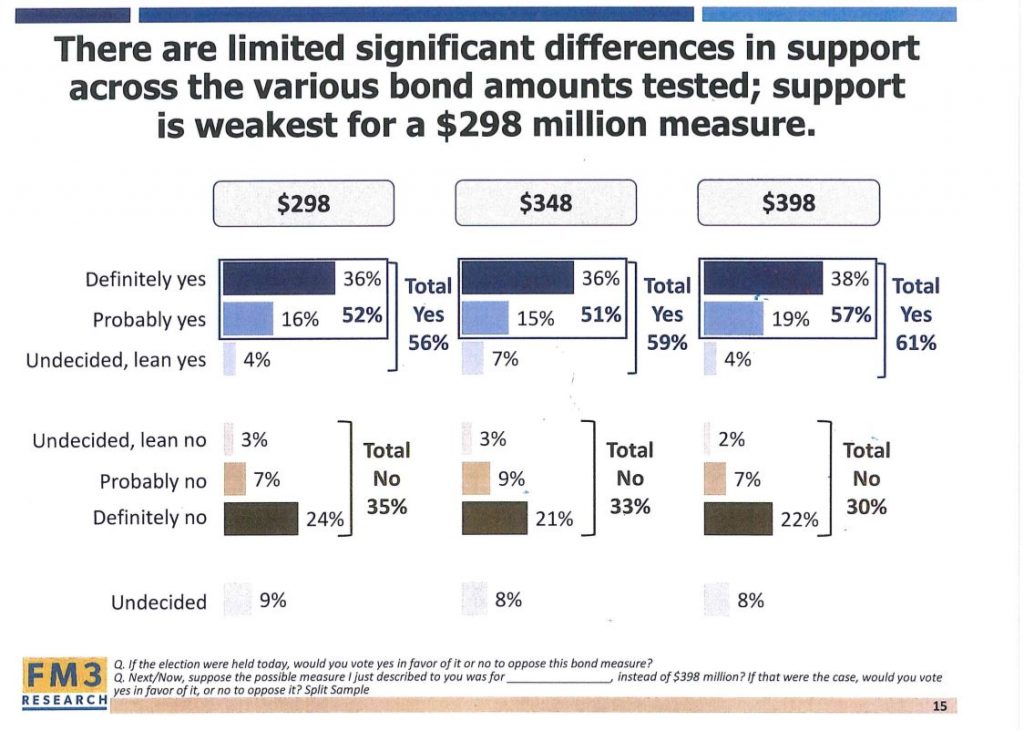 The survey also revealed that few AUHSD voters are aware they passed a $298 million school bond just five years ago: 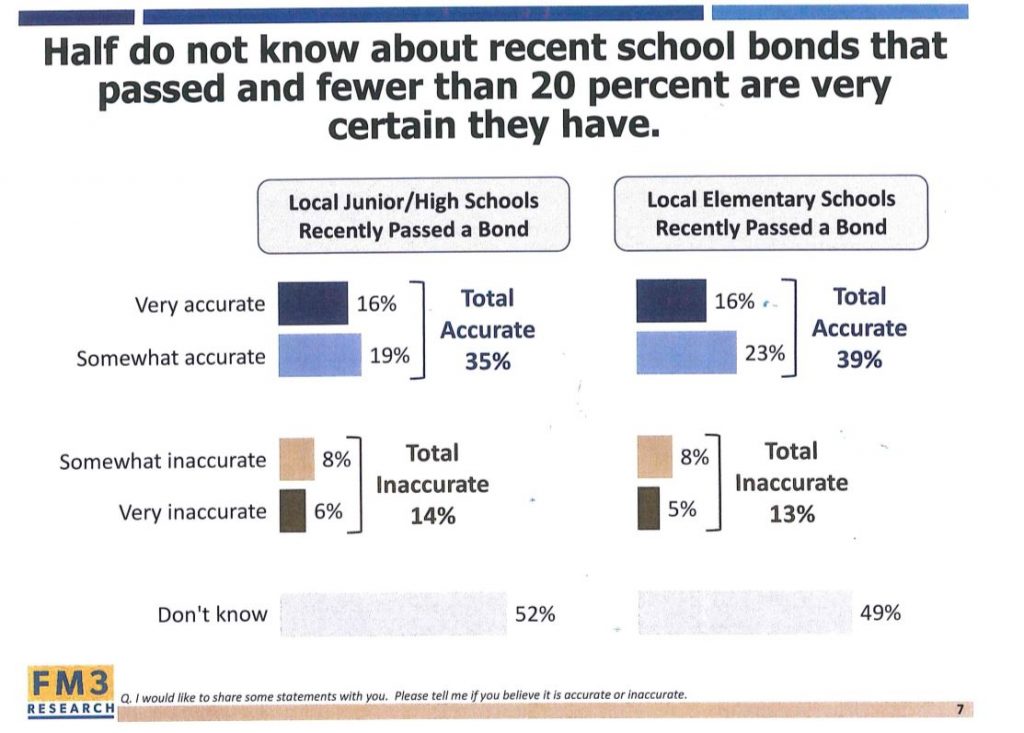 Q: I’m going to read some statements made by people who support the Anaheim Union High School District measure we have been discussing. Please tell me if it makes you more inclined to vote yes on this bond measure.

According to the poll, an “educational outreach” campaign increased voter support to 65% on the March 2020 ballot and 68% on the November 2020 ballot: 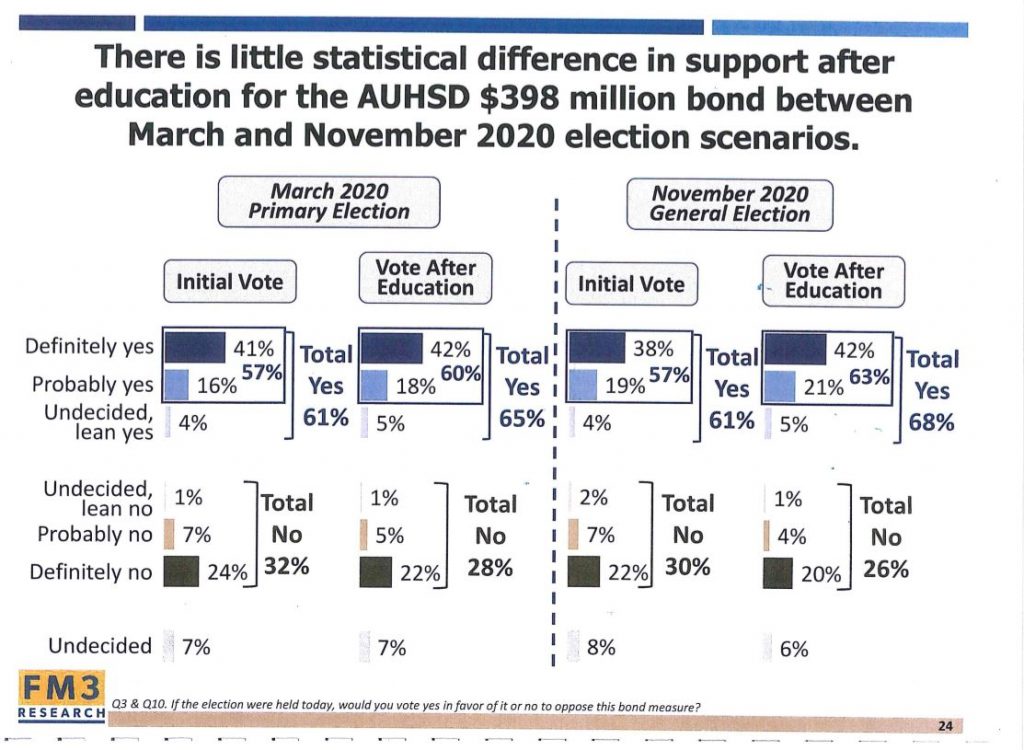 One can see why hyper-political AUHSD Board of Education President Al Jabbar recently told district staff to “bombard” voters with this kind of “edcuational outreach” – i.e. taxpayer-funded election advocacy – calling it the “key to winning the next bond election.”