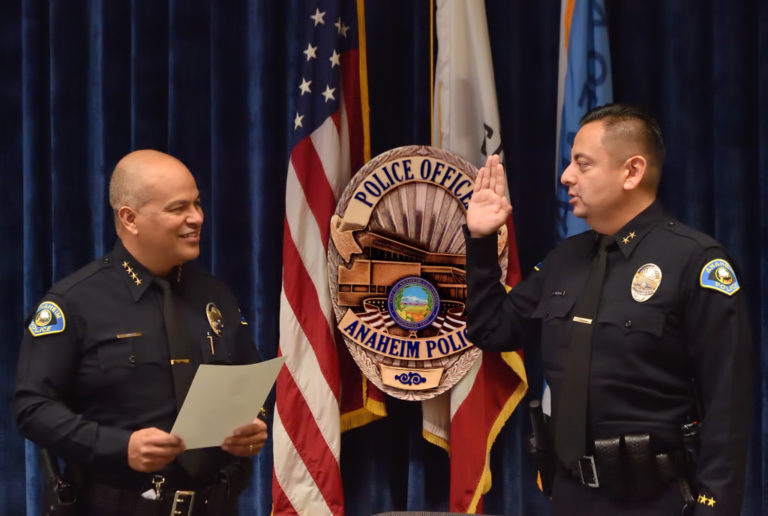 Driving to Modesto from Orange County at around 3 on a Friday afternoon probably isn’t on anyone’s list of “Fun Ways to Kick Off the Weekend.”

But Rick Armendariz is worth it – easily, his former colleagues say.

About a dozen current and former sworn and professional staff members of the Modesto PD were happy and thrilled to make the nearly 400-mile commute late last week, to Orange County and then back home after watching Armendariz be sworn in as the Anaheim PD’s new deputy chief.

And they didn’t care how long they’d be stuck on traffic-choked freeways.

Armendariz, his former colleagues say, is an amazing guy – and the Anaheim PD is lucky to have him.

“He was more than just a right-hand person,” Modesto PD Chief Galen Carroll said of Armendariz, who formally was sworn in by APD Chief Jorge Cisneros on Oct. 21. The latest swearing-in ceremony, on Friday, Nov. 15, was for Armendariz’ family and friends at the APD and MPD.

“He was a good friend,” Carroll said. “We still talk once a week.”

The first promotion Carroll made when he became chief of the Modesto PD, in 2013, was elevating Armendariz to the rank of captain.