Living In Their Own Private Anaheim: Jeannine Robbins And The Heckler Brigade 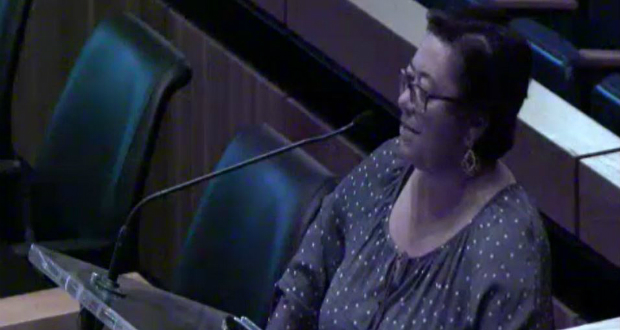 Month after month, we see them at Anaheim City Council meetings, trooping to the dais to vent their spleens, heckling people with whom they disagree: Mike and Jeannine Robbins, the Donelsons, Wesley Jones, David Duran, etc. Each meeting it’s a variation on two themes: Jose Moreno and Denise Barnes are noble and pure, and the rest of the council (and any who support them) are evil and greedy.

They frequently take their cue from the political object of their adoration, Councilman Moreno. Lately, Moreno has been accusing Mayor Harry Sidhu of being “tyrannical” for securing adoption of additional rules for agendizing council items. Among other things, these address Moreno’s penchant for political posturing by repeatedly re-agendizing matters on which the council – wasting staff and the public’s time.

Leaving aside Moreno’s apparent unfamiliarity with the meaning and practice of tryanny, his followers among the gadflies are following his line. Typical is this rant by Jeannine Robbins from last week’s council meeting:

Let’s think about that.

At every council meeting, Mayor Sidhu welcomes person after person as they come to the dais, calmly presides as they speak their often-antagonistic minds to the council, doing his best to ensure they can speak unimpeded by thuggish behavior in the chamber, and then thanking them when they are finished.

In contrast, Ms. Robbins, her husband, the Donelsons and other habitues of the gadfly section routinely heckle and jeer and shout down members of the public who voice opinions at loggerheads with their own.  They see the council chamber as belonging to them, and shamelessly try to use the heckler’s veto to shout down opinions they oppose.

Anyone who goes to Anaheim City Council meetings has seen them in action, and is struck by the gulf between their self-righteous words and appalling, adolescent behavior; between their lip service to free speech and contempt for others’ exercise of it. They’re living in their own private Anaheim in which they, the hecklers and booers, are actually the champions of free speech.

But Councilman Moreno – who has plenty to say about everything except the goonish behavior of his supporters in the chamber – is a big fan of Ms. Robbins:

Oh yes – heckling other people exercising their free speech rights is truly the soul of clarity and conviction.

It’s clear to any reasonable person who is really engaged in the business of stifling free speech – and it isn’t Mayor Sidhu.

Believe it or not, Ms. Robbins is running for Anaheim City Council from District 4.