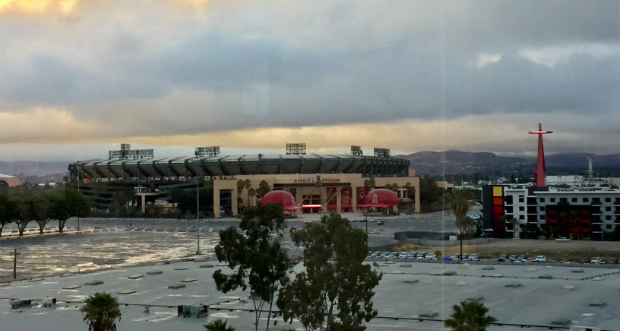 It’s game day for the proposed agreement to keep the Angels in Anaheim through at least 2050. The Anaheim City Council is holding a special meeting today at 2:00 p.m. to vote on selling Angel Stadium and the surrounding acreage for $325 million to a business partnership led by team owner Arte Moreno.

The city-commissioned appraisal came up with different valuations of the property under different scenarios: with a stadium, without a stadium, etc.

The mayor and city councilmembers have all stated they want the Angels to stay in Anaheim. Under that scenario, with the current 12,500 parking spaces, the land is worth $300 to $320 million. The Angels are paying above the appraised value.

If the Angels want to modernize the existing stadium or build a new one, they have to pay for it themselves. In the early part of 2020, the city and the team will negotiate a Disposition and Development Agreement to govern the residential, commercial, entertainment and retail development that will take place – plus any community benefits the city requires as conditions of approval.  The dollar value of those CBAs can be deducted from the purchase price.

In the early stages of the deal, the Angels will make a series of deposit payments to the city as development approval milestones are met – totaling $70 million. The balance of the purchase payment comes at the closing of the deal. The outside closing date is 2025, but realistically, it only takes that long if every conceivable delay takes place.  Critics are trying to portray this negatively, but this process is not unusual in real estate development transactions.

The proposed agreement would be an economic boon to Anaheim – a far better deal than the current stadium lease. An economic impact study concluded the agreement would lead to the creation of 33,000 jobs (both permanent and construction-related) and $1.2 billion in city tax revenue over the next 30 years.

As noted, if the city requires community benefits as a condition of approving development of the stadium site, the cost can be credited against the $325 purchase price.

This not an unusual or radical approach.

The Angels are buying the land based on its appraised value (higher, actually).  City demanded CBA lower that value. Say, for example, the city says the Angels need to set aside 20 acres for a public park. That would be 20 acres of property the Angels are buying but wouldn’t be able to develop or derive revenue from – and so the per-acre value would be deducted from the total purchase. The same methodology applies to other CBAs such as minimum affordable housing requirements.

So if critics like Councilman Jose F. Moreno want for cash from the sale, they can reduce their demands for CBAs.

Opposition All About Politics

With each passing day, critics of this deal have become increasingly hyperbolic and disingenuous – Councilman Moreno chief among them.

He and his political allies loudly and continuously claim the agreement is being “rushed.”

Where these complaints a year ago when the deal to sell the city-owned property around the Honda Center to the Anaheim Ducks was being negotiated behind closed doors.

The appraisal of the Angel Stadium site has been available to the public for weeks. The public didn’t get a look at the Honda Center property appraisal until the Friday afternoon – barely four days before the council voted on it.

Unlike with the Angels deal, there were no community events, no public information outreach effort.  The city council voted on the Ducks deal two days before Thanksgiving. The public had little to no time to digest the details or ramifications.

All those now alleging a lack of transparency — OCCORD, UNITE-HERE. SEIU, Councilman Moreno, etc, – were silent as the Honda Center agreement was being negotiated behind closed doors by Mayor Tait. No posturing from the council dais, OCCORD allegations of secret deal-making or calls for monthly updates from the city manager.

Did Moreno raise the roof with objections? No. Did he remonstrate Mayor Tom Tait for secret negoations and “rushing” the deal? Of course not. He only managed some meek criticism at the council meeting.

At an OCCORD-sponsored community forum in May of this year, Moreno talked to the audience about how great it would be “If we were just to sell the property – if we were just to sell it and say we want out of this stadium business” and use the revenues to invest in public services and niehgborhood investment.

That is done and done with this deal. Moreno’s response has been to invent a new set of demands and criticism that lack even the benefit of logic. He thinks Arte Moreno should be paying $525 million – the upper end of the appraised value without a stadium – even though he has publicly stated he wants the Angels to stay. In other words, he wants the Angels to stay in Anaheim but pay a price pegged to their leaving.

Lately, he is complaining that if the Angels sell naming rights to the new or modernized stadium, then the city won’t get that money. Uh, yeah – because the city would no longer own the stadium, which is what Moreno has said he wants.

At its May public forum, OCCORD’s then-director of organizing Andrew Hauserman pointed to how the new football stadium in Oakland ws being privately funded.

“Would that be great for Anaheim?” said Hausermann.

Hausermann complained the city ought to be getting $10 million annually in rent. Under the proposed agreement, the city will be getting twice that in annual tax revenues within 15 years – growing to the mid-30 millions annually by the 2040s.

The proposed agreement accomplishes that for Anaheim. Does anyone think OCCORD will be there today to compliment the city negotiating team on those “great” outcomes?

Two former mayors of Anaheim, Tom Daly and Tom Tait, recently published an op-ed attacking the proposed agreement as a “sell-out” of Anaheim but that hardly engaged with the substance of the proposed deal.

The present lease was negotiated in 1996 when Daly was mayor and Tait was a councilmember.  In all the contention over the stadium negotiations, the one thing just about everyone agreed on was the 1996 deal turned out to be not so great for Anaheim.

The fact is, the proposed agreement is far-and-away a better deal for Anaheim on every level: on keeping the team in Anaheim, in finally tapping the economic potential of the site, in terms of creating jobs and generating tax revenues, on setting the stage for a new and privately-funded stadium, etc.

Daly and Tait don’t like that mechanism by which the cost of city-require community benefits are credited against the purchase price of the stadium site. Sorry – but there’s no such thing as a free lunch. Everything has a cost – even community benefits. If, for example, the city decides that the Angels – after buying the 153 acres – then have to set aside a percentage of that acreage for a public park, that is a cost to the property owner. What do the former mayors propose? Selling those acres to the Angels and then force them to set aside a portion of the land and forgo development revenue? because that is the alternative. Would they like to be on the receiving end of that kind of deal?

Their greatest outrage was that  the proposed agreement doesn’t require Anaheim be included in the team name.

Perspective and self-awareness is in order here.

The team was known as the Anaheim Angels for only nine out of the 68 years the team has been in existence – when the team ws owned by Disney. From 1961 to 1997 they were the California Angels. In 2005, Arte Moreno changed the name to the Los Angeles Angels of Anaheim. He was able to do that because of the terms of the lease approved in 1996 by the city council on which Daly and Tait sat.

As readers recall, the city sued Moreno and spent millions on an ultimately fruitless lawsuit to force the team to revert to the “Anaheim Angels.”

Here’s the kicker: when the city was negotiating the lease terms with Disney, it proposed language that would have locked Disney into the “Anaheim Angels” team name. Disney rejected that language – and the city council accepted that by approving the lease. As the LA Times reported in 2006:

Disney owned the Angels then, and Guilford said the prominent use of the Anaheim name was “the bait dangled in front of the city” in exchange for its $20-million contribution toward stadium renovation.

At one point in negotiations, the city asked that the team name be restricted to “Anaheim Angels.” Disney refused.

Disney refused to obligate the team to keeping “Anaheim Angels” in perpetuity – and the Anaheim City Council agreed to that.  Nobody on that city council raised alarms or claimed that civic “pride” demanded a guarantee the name would never be changed.

Arte Moreno also spent millions defending against the city lawsuit – and won. He’s been crystal clear that he won’t change the team name back to Anaheim Angels – as much as many, if not most, hometown fans would like that.  Anyone can criticize – but given that reality, what do Daly and Tait suggest the current City Council do? Walk away from an otherwise outstanding deal? Would they entice Arte Moreno by lowering the purchase price – of which they’re already critical – in exchange for reverting to the Anaheim Angels name?

One thing readers do not get from that op-ed is any clue to how the authors would secure the benefits they claim are missing while simultaneously obtaining the maximum appraised sale price for the site.

Tait, in particular, had eight years to negotiate a new deal with the Angels. He wasted them. For some reason, he decided publicly demonizing the team owner was a good negotiation strategy. Unsurprisingly, Moreno had little interest in engaging with a mayor who depicted him as a corporate corsair attempting to fleece the taxpayers.

The circus of criticisms has been confused, disingenuous and ill-informed and offered by individuals and organizations with no clear idea of how to lasso their imaginary Stadium Deal Unicorn.