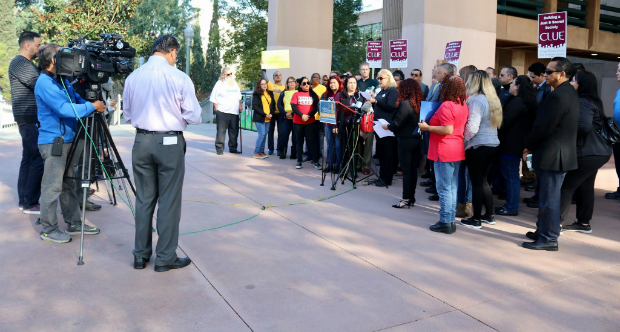 Readers of George Orwell’s dystopian classic 1984 are familiar with the concept of doublethink:

“The power of holding two contradictory beliefs in one’s mind simultaneously, and accepting both of them… To tell deliberate lies while genuinely believing in them, to forget any fact that has become inconvenient, and then, when it becomes necessary again, to draw it back from oblivion for just as long as it is needed…”

The leadership of the Coalition of Resort Labor Unions (CRLU) has contracted a serious case of doublethink.

Last month, the CRLU sued both the Disneyland Resort and one of its lessees for allegedly violating the terms of Measure L – a dubious claim which Disneyland vigorously disputes.  The CRLU claims Disneyland is not paying the Measure L-mandated minimum wage of $15 per hour – which notched up to $16 an hour on January 1, 2020.

Measure L was approved by Anaheim voters in November 2018. It mandates that any hospitality business that received a city tax rebate or subsidy (and their affiliated businesses, tenants and “adjacent” businesses) must pay a $15 minimum hourly wage starting January 1, 2019, escalating a dollar annually until reaching $18 an hour by January 2022.

Disney withdrew from its tax rebate agreements with Anaheim several weeks prior to passage of Measure L, thereby removing itself from the measure’s mandates.

Resort Union Doublethink In Action
That didn’t stop UNITE-HERE Local 11 and the rest for CRLU from misleading voters that Measure L applied to the Disneyland – nor from now claiming Disney isn’t abiding by a law that doesn’t apply to it.

“Measure L should be enforced by the City of Anaheim,” said plaintiff Kathy Grace, who works at a Starbucks inside Disneyland, speaking at the December 9, 2019 press conference announcing the lawsuit. “It’s been 13 months, and they have done nothing.”

“Given Disney’s refusal to pay its workers the legally-required wage of $15 an hour, my clients had no choice but to file this class-action lawsuit,” said Randy Renick, the attorney representing the CRLU members behind the lawsuit. Renick is a partner in Hadsell, Stormer, Renick, Dai, which is provides legal services for Local 11.

That’s weird – because a few months earlier, a Disney cast member who is a part of UNITE-HERE Local 11 leadership told the Anaheim City Council that her pay had increased due to Measure L.

Glyndanna Shevlin is a UNITE-HERE Local 11 shop steward and member of its executive board. She was the public face of the pro-Measure L campaign. At the March 19, 2019 council meeting, she gushed about how Measure L had improved her life as a Disney cast member:

“Measure L was a very big thing for me. It made me have a living wage and I now have a home. The last three years prior – I was homeless. But now I have a good living wage.”

Of course, Shevlin is being disingenuous, since Measure L does not apply to the Disneyland Resort.

But the point is you have Resort union leadership making contradictory claims about whether Measure L’s applies to Disneyland.

On one hand, you have UNITE-HERE Local 11 leaders, members and their attorney claiming Disneyland is failing to pay cast members $15 an hour as mandate by Measure L.

On the other hand, you have a Local 11 leader, spokesperson for Measure L and Disneyland cast member claiming that she got an increase to a “living wage” and has a home because of Measure L.

So which is it? UNITE-HERE and the CRLU can’t have it both ways. They can’t have a Measure L spokesperson and Disneyland employee says Measure L raised her pay, and then turn around and sue saying Disneyland isn’t raising cast members by according to Measure L.

The common thread running through this outbreak of doublethink is the CRLU is lying out of both sides of its figurative mouth, because Disneyland isn’t subject to Measure L under the plain language of the initiative. This isn’t surprising, as dishonesty is inherent in the Resort unions approach to people and politics.