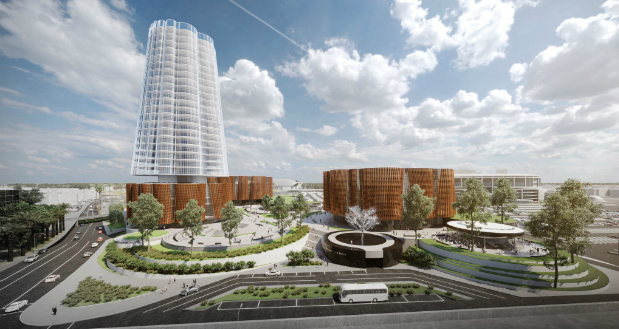 During the December 20 special meeting at which the Anaheim City Council considered – and ultimately approved – an agreement to sell the Angel Stadium site to an Arte Moreno-led partnership, much of the public comments period was taken up by supporters of Dr. Howard Kohl’s idea for an Anaheim Performing Arts Center (APAC).

Speaker after speaker – including Knohl himself – trooped to the podium to criticize the agreement and call on the council to sell them the 12-acre portion currently occupied by the City National Grove theatre. Knohl pledged to raise $700 million to build the APAC to “build the premier arts center in the world” that will “compete with the Lincoln Center” in New York City and “make Anaheim the cultural center of the western United States and perhaps in the world.” He claims create 3,500 new good-paying jobs and attract more than 2 million visitors annually.

During his comments, Knohl angrily attacked the Angel Stadium agreement as an “abomination” and a “monstrosity.” Since the council vote, Knohl has lashed out at the city council on social media with blatantly false allegations: 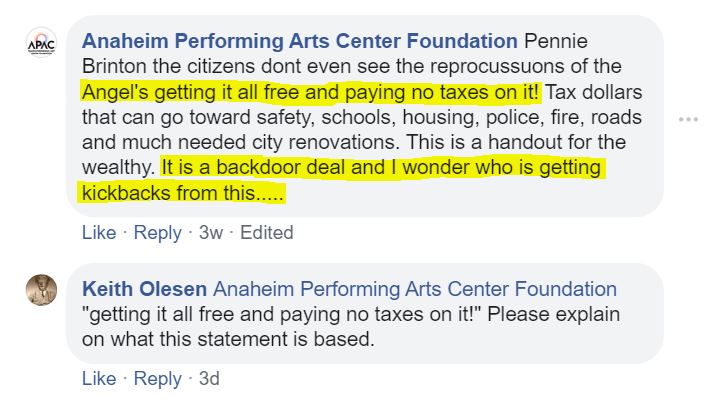 Knohl’s attacks are unfair, untrue and counter-productive. He didn’t respond to Olesen’s query because he has no response. The Arte Moreno-led partnership is buying the land and stadium for $325 million – not getting it “free” – and will assuredly be paying taxes.

And falsely accusing people of corruption is a poor bargaining strategy.

Contrary to Knohl’s allegations, the city council did not renege on an agreement with him – he failed to perform according to the mutually agreed up on milestones in the APAC’s exclusive negotiating agreement (ENA) with the city. Among other things, the ENA set forth fundraising milestones for APAC: $20 million by March 2018, $50 million by March 2019, 80% of the total development cost by March 2020 and 100% of the total estimated development cost by June 2020.

Knohl failed to meet even the first milestone. That put APAC in default and the city – under the mutually agreed upon terms of the contract – terminated the agreement in the spring of 2018. That’s nearly two years ago.

Keep in mind this was when then-Mayor Tom Tait had a majority on the city council.

The city and the Angles reached an agreement that keeps the team in Anaheim for another 30 years, gets the city out of the stadium businesses and places the onus on Arte Moreno for modernizing the stadium or building a new one. At the end of the day, a majority of the Anaheim City Council sensibly concluded it was wiser to sell the land to a single developer rather than piece-mealing it out.

Knohl has been working on his Anaheim Performing Arts Center project for many years, with city council support. As noted, the city council even approved the aforementioned ENA. But Knohl couldn’t perform – and that isn’t the city’s fault.

The Usual Suspects Seeking to Use Knohl For Their Own Purposes
Knohl began lobbing verbal hand grenades, opponents of the council majority have suddenly emerged as vocal believers in the Anaheim Performing Arts Center. After Knohl published a Facebook post attacking the Angels agreement as “reprehensible” and vowing to overturn it, the usual suspects flocked to his support: 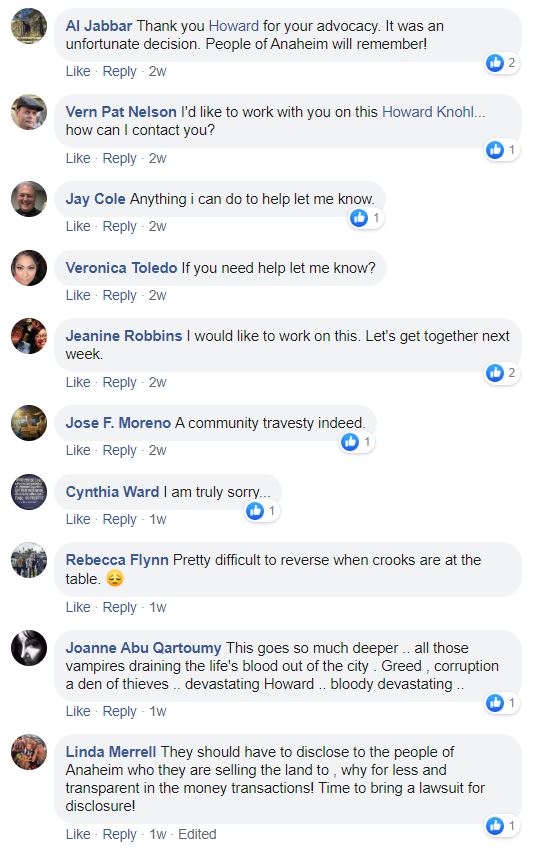 Where were all these folks when Knohl had an ENA with the city and was trying to meet his fundraising milestones? What, if anything, did Councilman Moreno do when the city terminated the ENA? After all, he was the Mayor Pro Tem and a member of the council majority at the time?  Suddenly, council hecklers like Jeannine Robbins and Rebecca Flynn care?

They don’t – but they do see that an angry and disappointing Howard Knohl can be useful to achieving their political ends.

Councilman Moreno wants to take over the city council in the November elections – and that includes defeating Councilman Steve Faessel. The last thing Moreno, his running mates and his political allies want is for Sidhu and the council majority to score a win. And the Angels agreement is a win.  They council majority campaigned on negotiating a win-win deal to keep the Angels in Anaheim. They’ve succeeded – and done so without the taxpayer subsidies which Moreno et al no doubt expecting to be part of the agreement.

For Moreno, Robbins, Al Jabbar, Vern Nelson and the rest – this is all about politics. Their underlying motivation for their sudden enthusiasm for the Anaheim Performing Arts Center is entirely and cynically political. They want to harness Knohl’s bitterness and try to use it to derail the Angels agreement.

Clearly, Dr. Knohl is deeply invested in and passionate about his goal of creating the Anaheim Performing Arts Center, which explains the bitterness with which he is lashing out. However, it doesn’t excuse it. He and his supporters had every opportunity to secure the City National Grove property, and didn’t succeed.

It’s important to understand the stadium site sale is does not spell the end for the APAC. It simply means Knohl and APAC will have to approach a different property owner. If Knohl can actually deliver on the wonderful vision and promises he’s been making, there’s no intrinsic reason eh cannot strike a deal with SRB Management as the latter plans out the development of the site. If he does indeed have $26 million in the bank with which the purchase the City National Grove site; if the APAC would create 3,500 new good-paying jobs and attract more than 2 million visitors annually; if Knohl really can raise the $700 million necessary – it stands to reason SRB Management would be interested in talking.

To that end, Knohl would be better off channeling his energies in a more productively by engaging the Angels positively in hopes of including APAC in the development plans for the site. That would be a more constructive approach tan allowing himself to be used by Moreno and his allies in their attempts to derail the Angels agreement. Perhaps Knohl believes the stadium site sale can be blown up and allow him to buy the 12-acres from the city. Alternatively, by attacking the agreement – and by extension the parties to it – Knohl risks presenting himself as a contumacious and undesirable development partner.