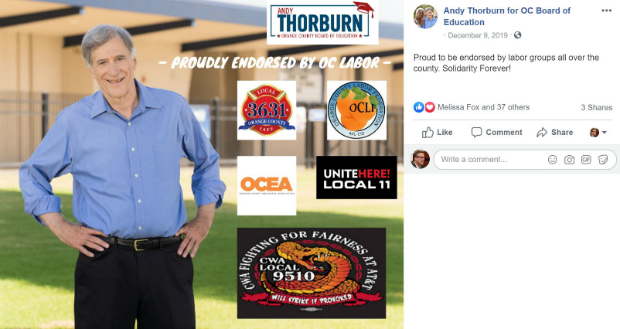 Two rich candidates – Andy Thorburn and Paulette Chaffee – are each spending hundreds of thousands of dollars to elect themselves to the Orange County Board of Education.

In Trustee Area 3, Andy Thorburn, a wealthy uber-progressive Democrat, has dumped $300,000 of his own money into an attempt to oust incumbent Dr. Ken Williams, a physician and conservative Republican.

In 2018, Thorburn was an unsuccessful candidate in the 39h Congressional District. In 2019, he launched a short-lived candidacy for the 3rd Supervisor District special election, withdrawing in favor of former Rep. Loretta Sanchez. Sanchez lost to Irvine Mayor Don Wagner.

Judging by his campaign social media, Thorburn’s platform amounts to opposing charter schools and rolling over the public school unions, and he is campaigning almost exclusively to Democrats.

In District 4, wealthy Paulette Chaffee has opened the spigots of her family riches in support of her campaign for the open Area 4 seat, loaning her campaign $291,750 to date. Chaffee was arrested in 2018 for stealing campaign signs. She pled guilty and was sentenced to community service. As we reported yesterday, it looks suspiciously like she’s using her court-ordered volunteer school tutoring as the basis for claiming to be an educator.

Thorburn and Chaffee both have the strong support of democratic socialist Anaheim Councilman Jose F Moreno and his brigade of left-wing allies such as AUSHD Trustees Annemarie Randle-Trejo and Al Jabbar – the latter of whom works with Chaffee on her husband’s supervisorial staff.

Moreno is co-hosting a “meet and greet” for Chaffee on January 23: 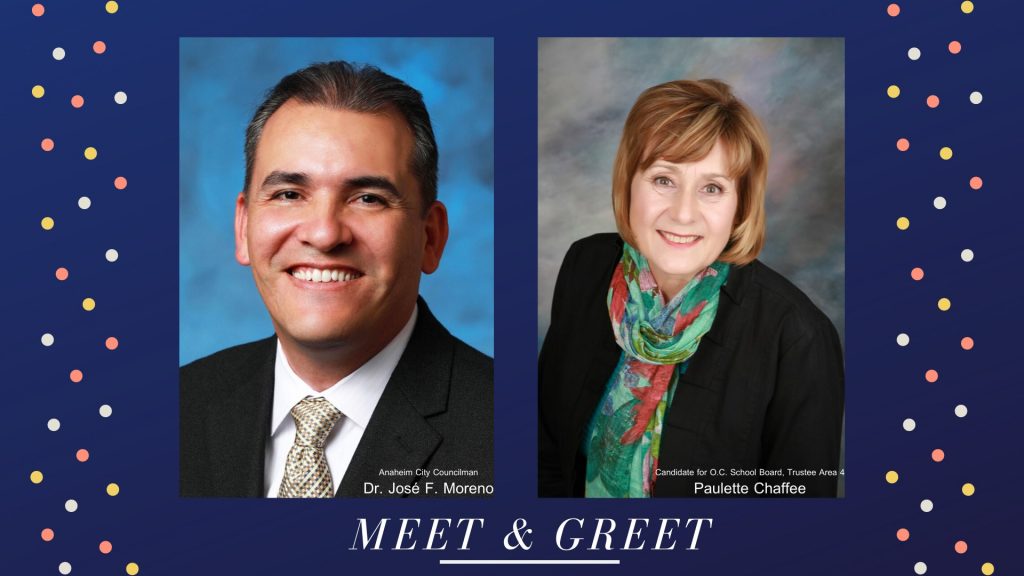 Like Chaffee, Moreno has also found himself on the wrong end of the law recently: a year ago he and 19 other left-wing activists were arrested for shutting down the intersection of Katella and Harbor in Anaheim in a union “action.” Moreno’s pre-trial hearing has been continued several times, and is now scheduled for March 2.

Co-hosting the meet and greet with Moreno are Randle-Trejo and another Moreno lieutenant, Ryan Ruelas.  As a member of the Anaheim Elementary School District Board of Education, Ruelas supported spending nearly a million dollars in taxpayer money to sue a group of working class immigrant parents for trying to convert their failing school into a charter school. The AESD – and its taxpayers – lost badly.

Moreno, Randle-Trejo, Jabbar and Ruelas frequently denounce the influence of big money and the wealthy in politics. Apparently, they’re OK with it as long as the big money is influencing politics in a manner with which they agree.