[Editor’s Note: the story has been updated with reporting from Councilwoman Barnes’ community meeting.]

District 1 Councilwoman Denise Barnes may or may not be running for re-election in 2020, but she is actively engaging in political mischief and gamesmanship.

Last week, she used her councilmember Facebook page to feed the public very misleading information about a proposal to increase the city’s inventory of homeless shelter beds in order to retain the ability to enforce the city’s anti-camping laws: 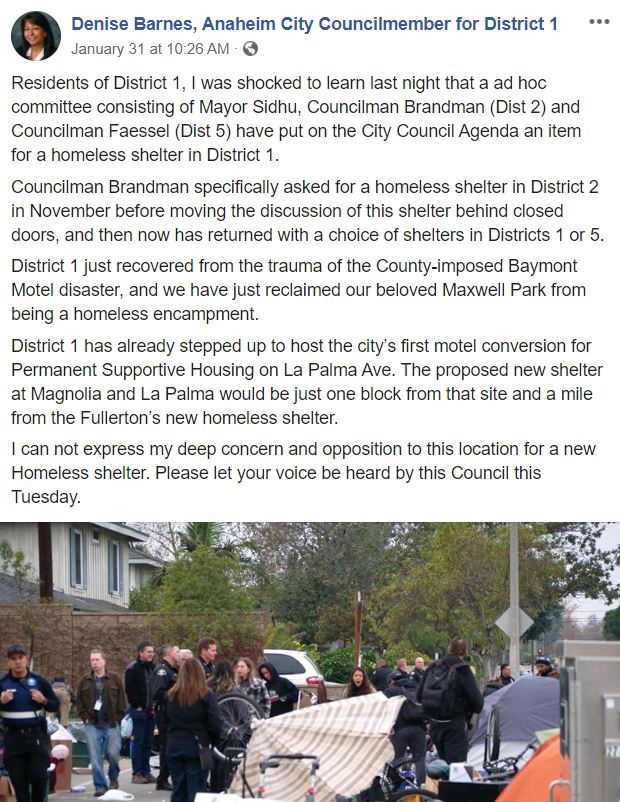 Not only is Barnes’ “shock” disingenuous, but she is deliberately misleading residents into thinking Mayor Harry Sidhu and Councilmember Steve Faessel and Jordan Brandman are conspiring to stick a homeless shelter in District 1. This is entirely false – as Barnes knows, since she presumably read the staff report on Item 14. The truth is the recommendation is for adding 100 beds to the Salvation Army’s interim shelter near the Platinum Triangle.

Since Councilwoman Barnes isn’t interested in giving her constituents the facts, here they are.

This is necessary because there are more homeless in Anaheim, and if the city is to be able to enforce laws meant to keep parks clear of homeless encampments then there must be a sufficient number of homeless shelter beds.

An ad hoc committee consisting of Sidhu, Brandman and Faessel was formed, which led to issuance of a request for proposal (RFP) for partnering with the city to add 50-100 shelter beds – with a focus on women, families, couples and pets – within three-to-four months.

The city received proposals from the Salvation Army and the Illumination Foundation, both of which are currently provide homeless services for the city. 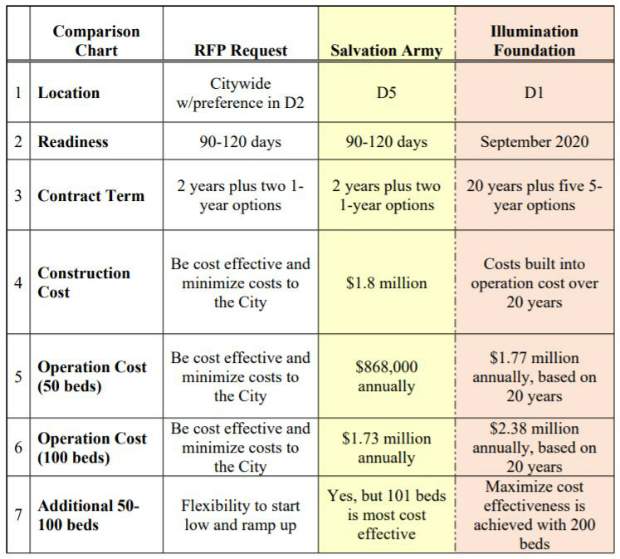 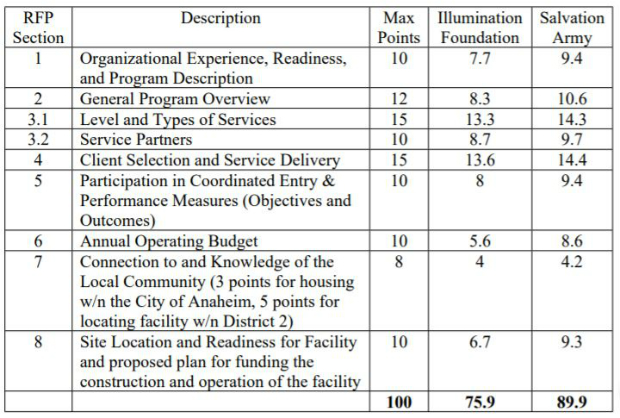 For that reason, the ad hoc committee recommendation is add the additional 50-100 beds at the Salvation Army’s interim shelter – not in District 1, as Councilwoman Barnes dishonesty contends.

Barnes deceptively claims this entire process took place “behind closed doors.” The truth is the RFP process was open and public.

“We?” That homeless encampment took root and grew while Barnes while she was a member of the Tait-Moreno council majority.  While Barnes was in the majority with the ability to take action, residents got a lot of palaver and hand-wringing.

The only reason the Maxwell Park homeless encampment was cleared was thanks to Mayor Sidhu’s energetic effort to open an emergency homeless shelter shortly after being sworn-in. The addition of those shelter beds enabled the city to enforce the anti-camping ordinance and clear the Maxwell Park encampment.

Maintaining the city’s ability to continue enforcing its bans on camping and storing property on city property is reason for adding 50-100 more shelter beds. Without additional beds, Anaheim won’t be able to enforce anti-campaign laws (per the Boise decision) and the encampments will return.

Barnes knows this. She knows there is no Sidhu-led effort to stick a homeless shelter in District 1 – yet misleads the public otherwise.

Barnes knows the RFP process leading to this recommendation was open, public and transparent – yet misleads the public otherwise.

Barnes knows the ad hoc committee recommendation is to augment the existing Salvation Army facility and not to create a new shelter in District 1 – and yet she misleads the public otherwise.

Councilwoman Barnes does a disservice to her constituents by cynically and disingenuously trying to whip them into a lather for her political purposes. 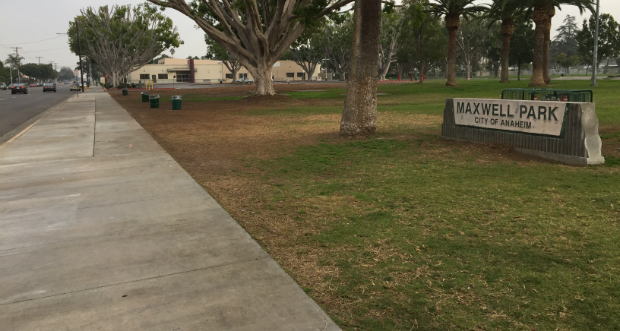 Barnes Didn’t Read The Staff Report
As it turns out, Councilwoman Barnes didn’t even finish reading the staff report on the homeless bed proposals before launching a misinformation grenade into the public square.

Recounting the exchange on the Anaheim Blog Facebook page, Klawe reminded Barnes she can question staff outside of council meetings, and that the RFP meeting was open to the public:

What is discussed is privileged, but councilmembers at least can ask questions to staff in advance to be prepared for the actual meeting. But I pointed out 4 groups attended the Proposal Meeting the staff held on December 5th.

Here’s the kicker from Klawe:

Denise asked me where I got that info, I said the staff report (Bottom of page 2). One point some folks don’t know. Cynthia Ward, who ran for Mayor in the last election, is one of Denise Barnes 2 staff members.

District 1 voters must feel reassured their councilmember isn’t doing her homework, and didn’t bother informing herself before raising false alarms to stir up her constituents.