Last week, Moreno shared a Zinn article about the signing of the Treaty of Guadalupe Hidalgo, which formally ended the Mexican-American War. The principal terms of the treaty: cession of the United States of the Mexican provinces New Mexico and California (already in U.S. hands) and the payment of $15 million to Mexico by the U.S.: 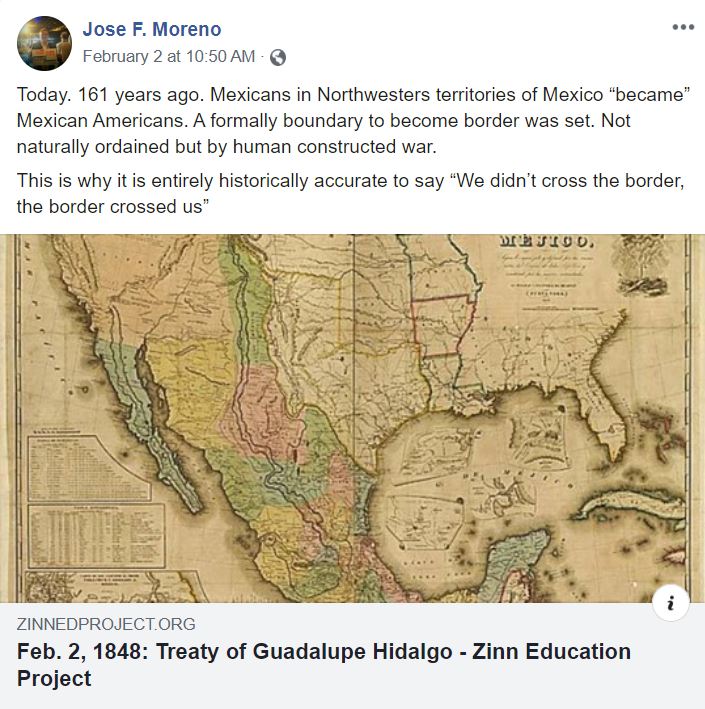 Let’s unpack Moreno’s commentary, which centers on borders and what he apparently considers to be the illegitimacy of our border with Mexico.

“A formally boundary to become border was set. Not naturally ordained but by human constructed war.”

Newsflash for Councilman Moreno: national borders aren’t “naturally ordained” (and perhaps Moreno could point out the “naturally ordained” border between the U.S. and Mexico). Borders are determined by human beings through their governments – and more often than not, or the product of war. The original borders of the United States were set by our victory in the Revolutionary War. The border between the U.S. and then-British Canada was set by agreement between their respective government after going to the brink of war. Mexico preserved its post-1853 borders by waging war for years against Yucatan secessionists.After World War 2, the Soviet Union annexed territory from Poland, Czechoslovakia and Romania; the Allies literally moved Poland several hundred miles to the west, at Germany’s expense. France’s northern border with Germany was settled by war between the two nations in 1870-71 – and again in 1919.  The present border between Paraguay and Bolivia was determined in the former’s favor by the outcome of the Chaco War of 1932-35. The 1879-1883 War of the Pacific border between Chile and Bolivia.

Likewise, the Mexican-American border was settled by the outcome of the Mexican-American War (and later adjusted in 1853 with the Gadsden purchase, a negotiated agreement under which the U.S. purchased of part of northern Sonora state). It was not historically exceptional or unusual.

Even in instances where borders follow geographic features like rivers and mountain ranges, it is human governments that settle them so.

This is why it is entirely historically accurate to say “We didn’t cross the border, the border crossed us”

Estimates of the number of Mexicans living in the Mexican Cession at the time of the treaty range from as 70,000 to 300,000. The loyalty of many of them to Mexico City was tenuous, at best. Communications and travel from these provinces to the rest of Mexico was difficult. California was de facto autonomous and resisted attempts by the central government to assert authority.

Significant Mexican immigration into the United States didn’t begin until the 1910s, fueled by the violence and upheaval of the Mexican Revolution. And then not again until the 1950s and 1960s. The historical reality is precisely the opposite of Moreno’s claim: the vast majority of Mexican-Americans crossed the internationally recognized border, not the other way around – just like any other group of immigrants to America. To claim, as Moreno does 172 years after the signing of the Treaty of Guadalupe Hidalgo, that “the border crossed us” is absurd.

This is a window in to Moreno’s grievance-based ideology and world-view – the “values” to which he often refers at council meetings. In this case, he is publicly presenting ideology as history, myth as truth. It’s muddled thinking rather than historical analysis.

This is just a particular expression of a growing movement to use social studies in public education to inculcate students with a culturally Marxist interpretation of American history. Howard Zinn – the namesake of the Zinn Education Project – was the most successful apostle of this view. He and his acolytes consider history to be real and authentic to the extent that it portrays America as oppressive, racist and unjust. The New York Times’ “1619 Project” is the latest iteration of this pedagogical movement. Leading historians have blasted the 1619 Project‘s claims – such as the American Revolution was fought to protect and advance slavery – as having no historical basis.

Nonetheless, the NYT is pushing its incorporation into public school curricula across the country. The Zinn Education Project, of course, enthusiastically supports this effort to teach young Americans their nation was founded not by the Declaration of Independence in 1776, but by the first importation of African slaves in 1619. More disconcerting is the enthusiastic embrace of this attempt to de-legitimize the Founding by ostensibly mainstream organizations like the Pulitzer Center.

Moreno’s post is emblematic of the kind of ideology-as-history that is increasingly seeping into public education, not least in Anaheim. In the Anaheim Union High School District, Superintendent Michael Matsuda, Trustee Al Jabbar, Dale Junior High School Assistant Principal Jose Lara – to name a few examples – are adherents of the Zinn school of history. Loara High School teacher J. Paolo Magcalas is another apostle of grievance history: he introduced Ethnic Studies into the AUHSD curriculum in 2015 and is calling for it to be made a high school graduation requirement. Magcalas is also a member of the Anaheim Elementary School District Board of Education, along with another AUHSD teacher, Juan Alvarez. Alvarez recently opined on Facebook his support for abolishing the border between the U.S. and Mexico.

Not coincidentally, all these individuals are members of the political machine that Moreno (and Matsuda) have been building using the AUHSD and AESD. This is the political bench that will be fielding candidates for Anaheim City Council in this and future election cycles.

It’s easy to dismiss claims like “We didn’t cross the border, the border crossed us” as fringe rhetoric from aging MEChistas. It would also be mistaken, because the activist educators like Moreno are endeavoring to incorporate its underling ideology into public school curriculum, in order to change how American students view the Founding of their country. After all, appeals to the principles of the Founding become problematic when voters have been taught the Founding was rotten and racist.

When posting on Facebook, Councilman Moreno often writes “History. Matters.” He’s right. And for that reason, students deserve to be taught real, factual, accurate history – not ideology dressed up as history. They ought to be taught truthful American history, warts and all – and not progressive axe-grinding that only talks about the warts (both real and imagined).